Golden Fantasies of the 1980s

One of many fantasy films released that decade, Ridley Scott's Legend (1985) remains exhilirating. 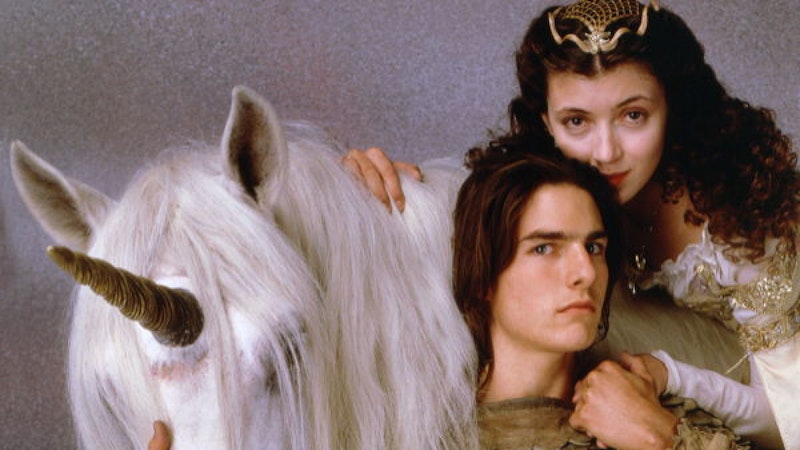 The 1980s was a golden decade for fantasy films. Some are considered classics (The Dark Crystal, Labyrinth, The Neverending Story), while others are forgotten (Ladyhawke, Krull). One of my favorites growing up was Ridley Scott’s Legend starring Tom Cruise, Mia Sara, and Tim Curry. It was a commercial and critical flop when it came out in 1985 but has since gained an audience through video rentals.

I first saw it at 13 and wasn’t sure what to think. Both the sets and Rob Bottin’s makeup effects were amazing, and I loved the atmospheric Tangerine Dream soundtrack, but the film felt incomplete. There were parts that didn’t make sense. Yet the film had a unique charm that made it enjoyable despite all its weirdness. I later learned that the version I watched was a heavily-edited version Scott made for US release after a disastrous test screening with mostly stoned teenagers in attendance. The director’s cut finally came out in 2002, which both Scott and Cruise recommend people watch instead.

As the film opens, the Lord of Darkness (Curry) commands his top goblin henchman Blix (Alice Playten) to kill two unicorns that protect all the light in the world so that he can rule the land. We then meet Lili (Sara), a free-spirited princess whose father wants her to marry a prince, but she’d rather be with forest-dweller Jack (Cruise) in the woods and learn how to talk to animals. One day Jack shows Lili the two unicorns. Lili goes up to touch the stallion—a forbidden act, Jack says, since the unicorns are sacred—and Blix blows a dart at the unicorn, scaring both animals away. Blix then cuts off the wounded stallion’s alicorn, and the world’s suddenly covered in snow.

Lili and Jack are separated after he jumps into a river to retrieve her ring to win her hand in marriage. Lili vows to make things right, but is captured by the goblins, along with the surviving mare. Meanwhile, Jack meets forest elf Gump (David Bennent) who, along with dwarves Screwball (Billy Barty) and Brown Tom (Cork Hubbert) and fairy Oona (Annabelle Lanyon), teams up with Jack to rescue Lili and the mare. Back at Darkness’ lair, he tries to seduce Lili, but she rejects his advances until suddenly she says she’ll marry Darkness if she can kill the unicorn. Jack and his crew overhear Lili’s conversation with Darkness and learn that sunlight is his weakness, which gives Jack an idea. The heroes collect every shiny metal plate they can find to set up an elaborate reflection system to direct sunlight into Darkness’ lair.

During the ritual where the mare is supposed to be sacrificed, Lili instead cuts the unicorn loose. As Jack and Darkness get into a sword fight, the light of dawn is directed through Darkness’ castle until it blasts him towards a window to the abyss. Darkness grasps hold of the wall with the alicorn and tells Jack, “What is light without dark? What are you without me? I am a part of you all. You can never defeat me. We are brothers, eternal.” Jack cuts Darkness’ hands off and he flies into the abyss. The gang restores the stallion’s alicorn, and spring returns to the world. Jack jumps back into the river and successfully retrieves Lili’s ring.

The end of the movie differs between the two versions. In the US cut, Jack and Lili run off together while Jon Anderson of Yes sings “Loved By the Sun.” Gump, Oona, Brown Tom, and Screwball all wave goodbye, but then Darkness’ face appears on screen laughing. The credits roll as Bryan Ferry sings “Is Your Love Strong Enough.” In the director’s cut, however, Lili realizes she and Jack live in two different worlds and can never truly be together, but they’ll still see each other. Jack runs off while waving goodbye to Gump and the gang, and then the credits roll.

The director’s cut fleshes out the characters, especially Lili. She’s complex; her sheltered life as a princess makes her curious about the world, yet also naive, stubborn, and manipulative. These qualities are both her strengths and weaknesses. Her naivete and stubbornness lead her to ignore Jack’s warning and touch one of the unicorns, but she’s also able to trick Darkness into making him believe she’s on his side.

There’s also more of swamp witch Meg Mucklebones (Robert Picardo) in the director’s cut. In the original US version, Jack’s encounter with her is very short; she appears, threatens to eat Jack, and then he cuts off her head. In the director’s cut, Jack charms Meg by saying how beautiful she is before decapitating her. With the extended version, we see Jack slowly grow from simple forest-dweller to hero.

Despite the overall superiority of the director’s cut, the US cut has its moments. While the original Jerry Goldsmith score (restored for the director’s cut) makes the film a timeless epic like Peter Jackson’s Lord of the Rings trilogy, the Tangerine Dream soundtrack gives the film a more dream-like ambience that perfectly matches the elaborate set designs. I also prefer the US cut’s ending; by showing Darkness’ face at the end, it suggests to the audience that he was right and there can never be light without darkness.