The hyper-real production design of National Velvet (1944) and the power of practical elements in filmmaking. 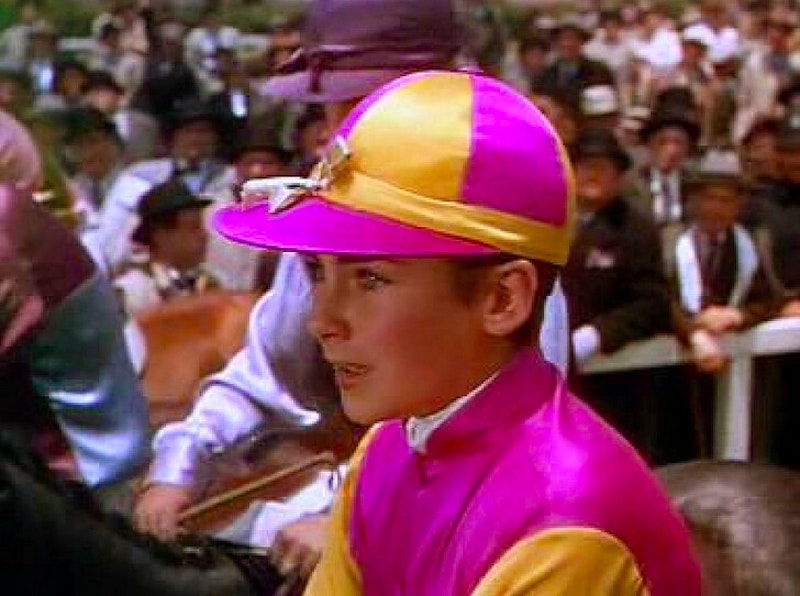 Anyone with any real conviction that computer-generated images have made movies better must watch 1944’s National Velvet. You could also look at almost any Vincente Minnelli movie from the 1940s, 1950s, and early-1960s, or anything shot in three-strip Technicolor, and Minnelli’s Meet Me in St. Louis is perhaps the best example of a live action movie that feels heightened, hyper-saturated, and more real than real, purely through practical effects (in Minnelli’s case, the outrageously beautiful sets and costumes). Brown’s National Velvet is hardly an obscure movie, but it’s not talked about or discussed nearly as much as any of Minnelli’s contemporary melodramas. Even in the legacies of its stars (Elizabeth Taylor and Mickey Rooney), National Velvet is just one more hurdle passed in long careers full of more prominent successes.

I’m sure this movie is very popular with certain children and “horse girls,” but like The Ten Commandments, unless you’re part of that cult, you probably haven’t seen it. Although children’s entertainment ages just as poorly with the general public as most media made after 1970, the exceptions are notable and similar—namely The Wizard of Oz, another three-strip Technicolor masterpiece. No need to go on about Dorothy and the gang, but you’ve seen the movie, and you know what it looks like. You’ve probably seen Meet Me in St. Louis, too, and maybe the feverish colors made an impression, conscious or not. National Velvet is in league with these movies: there isn’t a missed note, and you could—and should—show it to your kids.

Again, I may be talking about a hugely popular movie for young girls as if it’s some personal discovery, but Warner Archive just released the movie on Blu-ray for the first time, and like all Technicolor films on Blu-ray, it looks astonishing. The best MGM movies from the mid-20th century are intoxicating from minute-one because they look so incredible and more real than real. There’s no uncanny valley effect common to CGI work, or the lifeless trash put out by Netflix or, inexplicably, Marvel, where they can’t even be bothered to go and film in a real bar for a simple dialogue scene. Everything must be green-screened and controlled, from ancient arenas to pizza parlors. Not even MGM was this boneheaded when it came to reality.

I’ve written before about visually incoherent TV shows and movies that give the viewer no sense of space or any kind of direction or mind at all behind the camera. The camera’s the most important character in any movie, and when you destroy its ability to speak and comment and counterpose by constantly cutting from every conceivable angle, you’ve stopped making movies and started making moving pictures of people talking. Technical mumbo jumbo to most, but this is the way that the entire audience receives the work, and when it’s well made and with purpose, they feel it even if they don’t know it.

Popular cinema has been failing audiences for years. Movies like Cruella and Eternals—both PG-13 but made for children—look terrible, with no sense of space, lighting, production design, or camera strategy. If your characters are good enough, you can get away with shitty camerawork on TV—as with Succession, and Kate Winslet on Mare of Easttown—but movies are not uniform tubes to stick plot information into, like TV episodes. In the decade since “prestige TV” surpassed popular cinema’s cultural capital, the latter has barely put up a fight, losing sight ever more every year of the two bedrocks of the form: images and time.

A film like National Velvet could be remade today with no changes and be a hit (with Julia Butters in the Elizabeth Taylor role). Daydreaming daughter of a butcher (Donald Crisp, in one of his best roles) Velvet Brown meets a vagabond named Mike (Rooney), and together they find a wild horse she names Pie. Only she can tame him, and after convincing her family (including Angela Lansbury as the eldest daughter in another excellent early appearance) to let her keep him, Velvet and Mike enter him into the Grand National steeplechase, with Velvet as jockey pretending to be a boy. She nearly wins, but passes out yards before the finish line. Her fraud’s forgiven, and she and her family get to keep Pie. And all is well in the kingdom of 1920s England.

Now, you could remake this movie today, but why bother? It would look horrible. This Blu-ray presentation is enough to hook any kid and any doubter of the power and necessity of practical effects and a thoroughly considered visual design. Taylor and Rooney aren’t the only ones who make you react or feel in National Velvet—sometimes it’s the clothes, or the array of lighting in the Brown household just after Edwina (Lansbury) has been kissed for the first time. Because it’s in Technicolor and in plain speech, there’s no era barrier for fresh eyes and open minds, and going into the holiday season, there isn’t a movie I’d recommend more than National Velvet for as broad an audience as possible.

This is a movie, a hit in its time and the film that established Taylor as a star (Rooney, a star who hasn’t quite endured as much, is top-billed here), that will make you feel something new despite the fact that it came out nearly 80 years ago. And that’s entirely because of the way it looks. Technicolor may be gone, but the art of lighting isn’t. Too many people have forgotten or never even bothered to consider how important the image is to their moving images, whether they’re made for the flatscreen or the silver screen.