There's No Bond of Harlan County 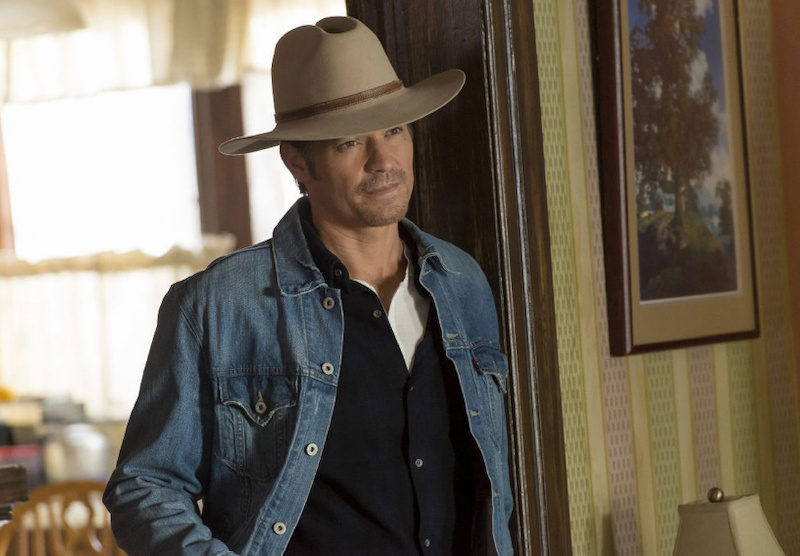 “Well I suppose if I allow myself to be sentimental,” Raylan says, “despite all that’s occurred, there is one thing I wander back to…” “We dug coal together,” Boyd says. Raylan nods. “That’s right.” With this, the sixth and final season of Justified comes to an end. It's one last bit of fake Harlan County fellowship used to sell a lie. Raylan has come to Tramble Prison to tell Boyd that Ava is dead, though in fact he's tracked her to a ranch in California where she's living with her son Zachariah—the son Boyd will never know. Raylan fulfills his promise to her, that she'll be fine, and convinces Boyd that she died in a car accident on a desolate stretch of Texas highway.

This isn't the finale anyone was expecting: Ava makes it out, and the final showdown between Raylan and Boyd ends with Boyd refusing to draw, and Raylan deciding, despite Boyd's threats, he'll bring him in rather than gun him down—this won’t be like Nicky Augustine.

All of the major season six drama involving Markham and his hired gun Boon is wrapped up with 20 minutes left to spare—Boyd indeed kills Markham, just as Raylan kills Boon, and if their storyline was ultimately superfluous, watching Sam Elliott and Jonathan Tucker was a lot of fun. Markham rates second only to Mags Bennett on the list of Best Justified Big Bads. Elliott is such a likable character actor but here he really pulls off threatening without ever doing much to warrant it. Likewise Boon, who really was just as fast as Raylan but Raylan’s “10 gallon hat” saves him in the end, that and Loretta, who is left to inherit whatever Harlan County still has to offer.

Jump ahead four years and Raylan is living in Florida, sharing custody of his daughter with Winona, when he gets a tip from the Seattle field office, a newspaper clipping with the photo of a woman who may be Ava. Indeed it is Ava, and Raylan’s off to California to confront her. We find out about Zachariah, and also that Wynn Duffy helped Ava escape from Harlan County all those years ago, for the remaining $9 million of Markham’s money (“rumors of him surfing in Fiji.”) But as Ava says to Raylan, “You’re not the only one I’ve been afraid to see at my door.”

Cut to Boyd in Tramble Prison, who’s back to preaching, telling any inmate who’ll listen about his lord and savior Jesus Christ—the same old con from season one. But when Raylan shows up the two share a knowing laugh. “You’re repeating yourself,” Raylan says, before telling Boyd that Ava is dead. He’s printed out a fake death certificate, a fake driver’s license. She was using an assumed name, Caroline Dean. “We matched the DNA to a hair from a brush in Harlan.” When Boyd asks why Raylan drove all this way to tell him, there’s that bit about the coal—“We dug coal together.”

Raylan had already told Ava he never intended to see Boyd again, but he does it anyway to ensure the promise. The nod and the sentimental talk… there’s no bond of Harlan County, but it sure helped Mags get a big check from Black Pike back in season two, when she rallies everyone at the assembly with her “We got our own way of living and dying” talk, the same way Loretta rallied everyone to refuse Markham’s land offers a few episodes back. Of course, that kind of thinking didn’t do Dewey Crowe any good, staring at that old photo, when Boyd killed him at the start of the season, but here it helps Raylan finally leave Harlan County behind: Boyd in jail, Ava free, and him back in Florida, sharing ice cream with his daughter.