Game of Thrones Recap 5x2 - "The House of Black and White"

What will Arya find in Braavos? 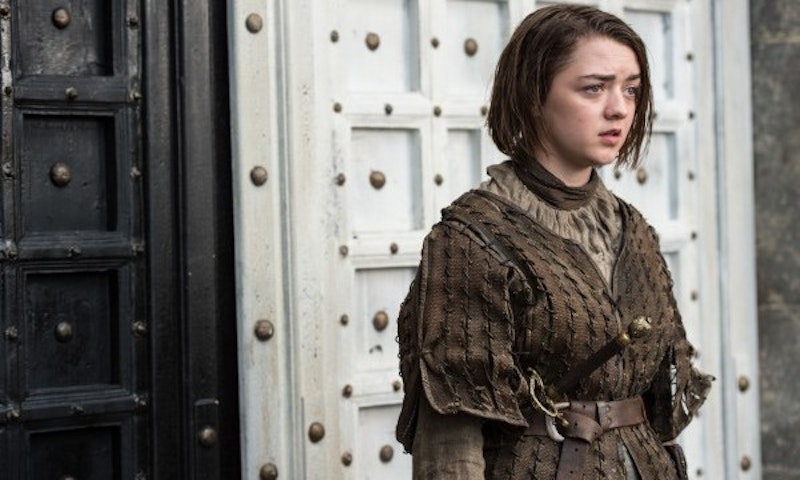 Well, that really didn’t take long. As I predicted last week, Brienne and Podrick come across Sansa and Littlefinger in a country ale house. Brienne introduces herself on bended knee, and swears her loyalty, but Littlefinger questions the worth of a woman whose sword failed to save both Renly Baratheon and Sansa’s mother. Obviously, having Brienne around would complicate whatever Littlefinger’s plan is—he tells Sansa that his “marriage proposal has been accepted” but nothing more, which makes me think the proposal isn’t actually for him. Sansa dismisses Brienne, telling her that she saw her at Geoffrey’s wedding, bowing to the king. “Neither of us wanted to be there,” Brienne says. “Sometimes we don’t have a choice.” “And sometimes we do,” Sansa says.

Brienne and Podrick ride off, chased by some of Littlefinger’s men, who Brienne promptly puts her sword through. Podrick suggests that maybe, now that both Stark girls have refused her, they can return to King’s Landing, but Brienne isn’t having it—“Do you think she’s safe with Littlefinger?” Wherever Sansa ends up, I foresee Brienne saving her from some certain death. After all, with Stannis nearly ready to ride south from Castle Black, the North will soon be in all-out war again.

Of course, without a wildling army to back him, Stannis has to come up with another plan. Trying to rally disparate northern tribes isn’t working too well—as the Lady of Bear Island writes to him, “Bear Island knows no king but the king in the north, whose name is Stark.” So Stannis makes an offer to Jon Snow: pledge to follow me and I’ll make you Jon Stark, Lord of Winterfell. It may have worked if shortly after Jon weren’t elected as the new Lord Commander of the Knights Watch, defeating Ser Alliser Thorne thanks to a tie-breaking vote by Maester Aemon.

Meanwhile, Arya arrives in Braavos, and is taken to the House of Black and White, only to be turned away. She roams the streets for a couple of days before Jaqen H’ghar finally reveals himself. Arya wants nothing more than revenge, but I wonder if those on her list might not get what's coming to them long before she becomes a faceless (wo)man. Unbeknownst to Arya, the Mountain is already dead (or, mostly dead), and Cersei is increasingly losing hold of her power in King's Landing.

Jaime promises Cersei he'll sneak into Dorne to bring home their only daughter, who Ellaria Sand (lover of the late Prince Oberyn) wants nothing more than to hack apart and send to Cersei one box at a time. Oberyn's brother, however, Prince Doran, won't go to war to avenge Oberyn, but Ellaria's threats make it clear the issue isn't settled. And even though Jaime is bringing Bronn with him to Dorne, I doubt things go off without a hitch.

Then there's Daenerys, who makes the difficult (and disastrous) decision to publicly execute her former slave advisor Mossador after he kills a captured Son of the Harpy who was awaiting trial. Indeed, Daenerys is still trying to "answer injustice with justice," as she told Ser Barristan after taking Meereen last season, so it's fitting that the crowd of former slaves should cry "Mercy!", only to hiss and riot after the execution is over. Daenerys is losing all hold over Meereen, so I have to wonder if Varys and Tyrion will arrive before it all falls apart.