Everybody’s a Joke and No One’s in on It 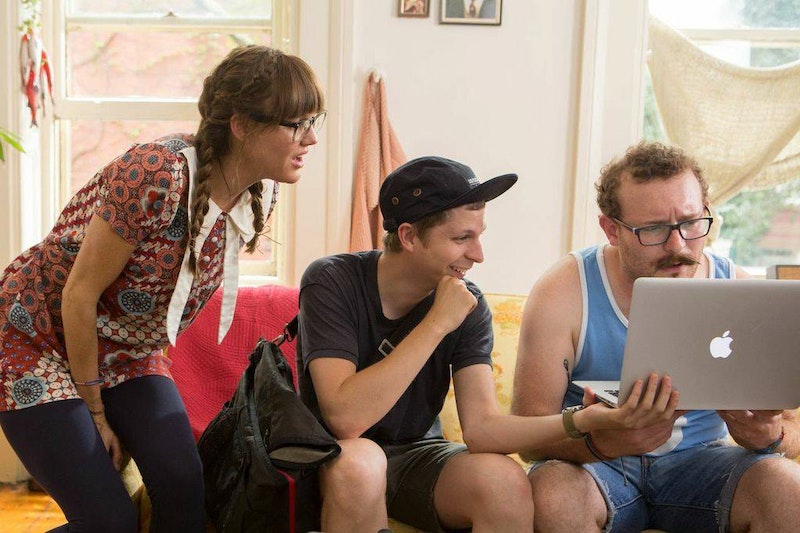 Every small town or community in America is home to at least one certified crank: the neighborhood snoop, the perennial letter-to-the-editor curmudgeon, the sawed-off Action News tipster, the serial council-meeting carpet bomber. With the crumbling fictional hamlet of Liberty, New York, that’d be one Dave Stuben, balding divorcee and recycling-center employee. Portrayed by Mark Walsh in Hits, a stiff, distracted Libertarian, gorging on anti-establishment talk radio, sending hate mail to the town council president (Amy Carlson), flipping out in town hall meetings, and failing to convince his The Voice-obsessed daughter Katelyn (Meredith Hagner) to stick around for dinner. Someone routinely videotapes his council rants—equating the council with history’s dictators and often centered around the town’s failure to plow snow or fill in potholes—which pile up on YouTube. Katelyn works at a bar and dreams of cutting a demo, and borrows a couple of hundred from the old man to that end; it won’t be quite enough, with the difference powering one of the movie’s plots.

Hits plays with a bunch of themes, with lust for fame in the modern age sticking out. Katelyn, who pretends to be an interview guest on Ellen while driving around town, longs to become a celebrity via The Voice or Teen Mom. The kicker: she’s a terrible singer. Dave longs for the acknowledgement and respect of a disengaged town council who, on evidence, couldn’t care less what their taxpayers have to say about anything. So which of the two become suddenly, insanely famous? You get one guess. People who have seen this movie already or skimmed its IMDB entry may wonder why I haven’t written about any other characters in Hits. It’s because there are no other actual characters here, just caricatures loosely sketched to semi-dramatize director David Cross’ disenchantment with the cheap whimsy and twisted-nerve divisiveness of modern life.

So Carlson’s a wretched witch. Josh Ritter surfaces, hilariously, as a stoned hesher with a home-recording studio. Michael Cera drifts in and out as a gloss on the conceit of High Maintenance. Jake Cherry shows up as pop culture’s zillionth imagining of the teen/twentysomething wigga. David Koechner shows up as a redneck, probably because he’s pretty good at playing rednecks. In a bit of stunt casting so random and fleeting that I’m not even mad about it, Julia Stiles has a minute or two at the beginning as clueless, sticks-invading yuppie scum—given her general cinematic demeanor in the aughts, it isn’t hard to imagine that this is who she is in real life—as though she wandered in from a totally different flick. The rest, generally, are insufferable hipsters who descend on Liberty en masse from NYC on the social-media fueled assumption that a particular focal point is representative of a cause celebre worth Tweeting at and rallying around.

Some of their foibles are reasonably amusing—artisanal cardboard boxes? a brand of weed called ”Queef Latina”? a barren doofus in pigtails chirping “Oh hey, just got another order for the feminist theory onesie”?—but a heavy air of condensation informs both the acting and direction; you can sense almost everyone in this movie rolling their eyes at the targets they’re satirizing. Ditto for the small-town rube caricatures, sketched so thinly that they aren’t worth dwelling on. Buried under all of this dross is promising, a low-to-the-ground parable about the dangers and temptations of hand-held interconnectivity that the world needs to hear right now; too bad it gets lost in the “screw everyone” shuffle of Hits.