Why write about the Hammer vampire films? 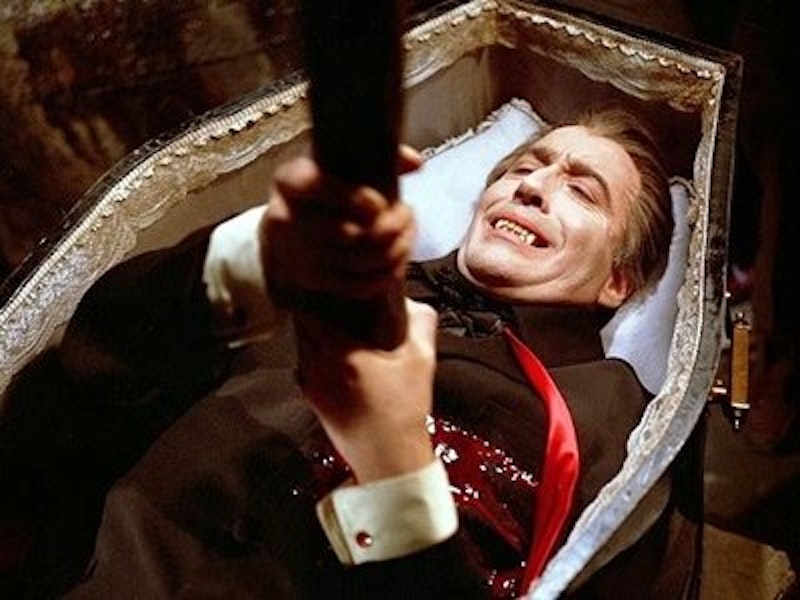 "What in the fucking world made you think that anyone would care about your review of old vampire films?" That was a comment on one of my Hammer vampire posts from an indefatigable Splice commenter. And he's got a point. The nine Hammer vampire films are old pop culture—released between 1958 and 1974 they are, at this point, quite long in the tooth. So why revisit them?

Usually, people write about old pop culture either because it was very popular, or had some unique artistic merit that makes it worth discussing decades down the road. Alternatively, people will sometimes write about an old film or TV show because it has personal resonance or nostalgia; "How old Aquaman comics led me to marine biology." "The Greatest American Hero and my fascinating coming of age."

But none of these reasons really apply to the Hammer Dracula films. Yes, the movies were fairly popular in their day, but not culture-defining blockbusters. They weren't artistic masterpieces either; the first film, Dracula, has a touch of genius, as in its way does the last one, Legend of the Seven Golden Vampires. But between those two peaks, the rest of the films all fall somewhere between "pretty good" and "pretty bad." Nor do I have any personal narrative to justify my interest in Hammer studios. This was my first time seeing the films. I've heard others express nostalgia for them, which was why I was interested in them.

The Hammer Dracula posts, then, were really about discovery; I'm a horror buff and wondered what the movies would be like, and what I'd think of them. Like Dracula, who often seems in the films to batten on whoever is nearby, the posts were opportunistic—a way to see what was out there, rather than a way to find something that could be sold as the most important thing for you to read right now.

Manny Farber famously argued for the virtues of termite art. "The idea of art as an expensive hunk of well-regulated area, both logical and magical, sits heavily over the talent of every modern painter, from Motherwell to Andy Warhol," he argues. For him, film was best when it was low budget and lowbrow, unassumingly squirming about in a log, unlike "white elephant art" which trumpets its own virtues. The best films Farber says, "seem to have no ambitions towards gilt culture but are involved in a kind of squandering-beaverish endeavor that isn't anywhere or for anything."

The Hammer films themselves would qualify as termite art; they have few pretensions to value or permanence.  What's interesting about the films isn't so much an individual vision as the scrambling, ad-hoc effort to give largely moribund tropes some bite. As a whole, the series tends to blur together, leaving only an imagistic impression here or there, where someone—an actor, a director, an effects technician—happened to have a good idea. The convincing sexual hunger and jealousy expressed by the bitten barmaid in Dracula Has Risen From His Grave; the farcically clumsy bat puppets in Scars of Dracula; the brilliant decision to mash up Dracula with a Chinese karate movie, and the poorly-executed decision to mash up Dracula with James Bond. And of course, flitting through most of the series, Christopher Lee, whose Dracula is less a nightmare prince of darkness, and more abusive, sadistic boyfriend. Iconic and taciturn, Lee manages to effectively underplay one of the most over-the-top villains in all of cinema. Amidst those gothic trappings, the Hammer Dracula comes across as just a jerk who likes to hurt people; the termite pettiness of his malevolence is part of the terror, and part of the charm.

If Hammer films have to be appreciated as termite art, then, I suppose my essays about the Hammer films would have to be appreciated (if at all) as termite criticism. I had no ambitions to use the series to establish the vampire king on his rightful throne of blood. Instead, I just wanted to open casket or two, and see if there were any termites worth looking at inside.