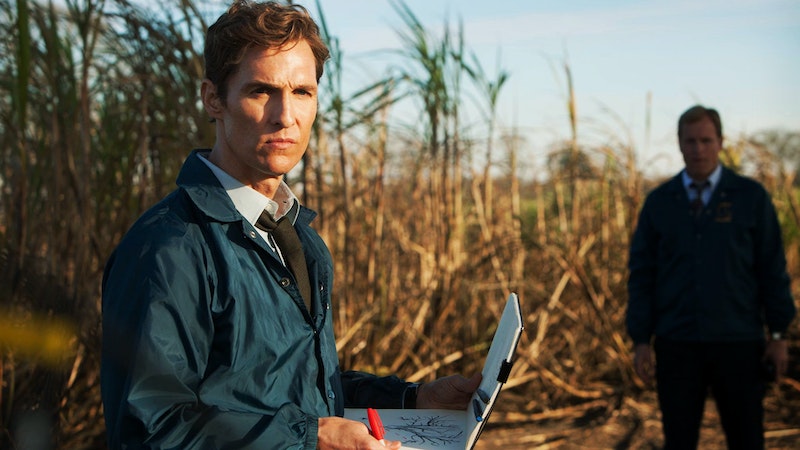 There's no doubt at this point that Matthew McConaughey is doing the best work of his career. After years as little more than a rom-com pretty boy (2005's “Sexiest Man Alive!"), or a minor actor in Hollywood fluff (U-571, Sahara), McConaughey has finally taken on some impressive roles: a homeless fugitive in Mud, a cop turned killer-for-hire in Killer Joe, and an AIDS patient smuggling illegal pharmaceuticals into Texas in Dallas Buyer's Club—the last of which earned him a Golden Globe and a Screen Actors Guild Award, and will likely earn him an Oscar as well.

It's fitting then that McConaughey would star in 2014's best new TV show: HBO's True Detective. Set in Louisiana in the mid-90s, True Detective follows two state CID officers—McConaughey as Det. Rust Cohle and Woody Harrelson as Det. Martin Hart—investigating a ritualistic homicide; a woman has been found in a backcountry field, tied to a tree, naked and marked with Satanic symbols. Cohle thinks it's the work of a serial killer—"I can tell you this wasn't his first," he tells Hart. "Too specific." The story is told in videotaped accounts some 20 years later: neither Cohle nor Hart are still with law enforcement, but another recent murder suggests that they got the wrong guy all those years ago.

Visually, True Detective is stunning. Director Cary Fukunaga brought in Australian cinematographer Adam Arkapaw, who worked on last year's Sundance miniseries Top of the Lake. The story was written by Nic Pizzolatto, previously of AMC's The Killing, who here is far more interested in the detectives than the murder they're trying to solve. Cohle and Hart are not the anti-heroes we've come to expect from 15 years of cable drama—Alyssa Rosenberg made this point in her review for ThinkProgress: "…finally, it seems, we’re ready to admit that men with disastrous personal lives and uneven work records might not be anything more than truly messed up."

Indeed, there's nothing romantic or even particularly likable about either Cohle or Hart; you're not really rooting for either one of them. Hart is a pathetic womanizer, Cohle a self-destructive addict. Hart ruins his marriage over a young woman who isn't interested in anything more than sex—"I don’t want to marry you, Marty. That’s the whole point. It’s just run its course." Cohle drinks, buys drugs from his informants, keeps a stash of heavy weaponry in his apartment ("…in case the war came back on me"), and is completely devastated by the death of his young daughter a few years earlier. Neither may be very good at their jobs. "Do you ever wonder if you're a bad man?" Hart asks Cohle. "No, I don't," Cohle says. "The world needs bad men. We keep the other bad men from the door."

At the end of this past Sunday's mid-season episode, "Who Goes There," Fukunaga gave us a brilliant six-minute tracking shot, following Cohle through a shootout in a ghetto housing project. It's a technique Fukunaga is known for, having used it in both his feature films, Sin Nombre and Jane Eyre. It's likely to be the best scene you'll see on TV all year. Be sure to read Fukunaga's interview with MTV, wherein he explains that the cast and crew were only given a day and a half to rehearse the scene. With brilliant work like this, True Detective has set a new standard for TV drama.