The Monuments Men is a comforting distraction. 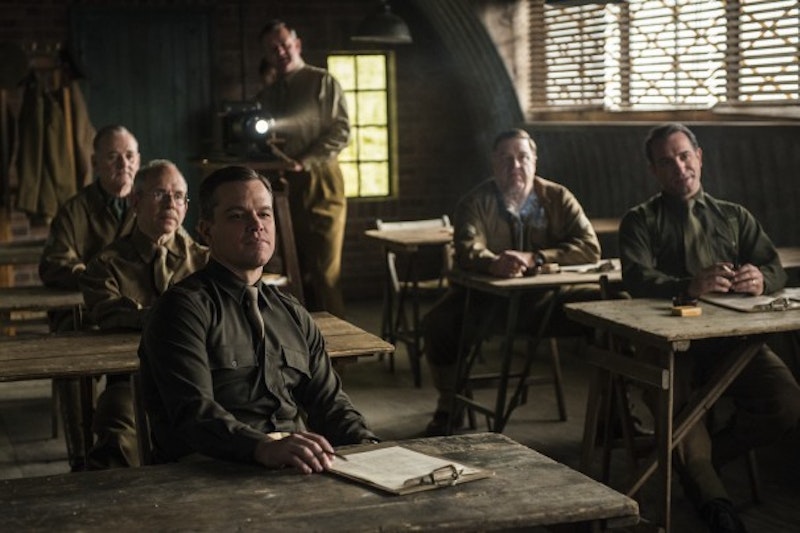 I can’t remember a darker cloud hanging over the movie industry than right now. Still recovering after the business collapsed, 2013 was another year of safe bets and formula at every level, from the tent poles, the Oscar bait, the pseudo-indies, and the winter slag that gets ridiculously worse every year. The entertainment industry can’t shake past routines. After the sudden death of Philip Seymour Hoffman, and the awful Dylan Farrow/Woody allegations, a rote celebration of okay movies doesn’t just feel outdated—it’s a bleak, bleak scene.

So, a movie like The Monuments Men, a piece of winter slag that would usually put me to sleep, was really refreshing and pleasantly distracting for a Sunday afternoon. It wouldn’t have been an ounce enjoyable without its rock star cast, in order of preference: Bill Murray, Bob Balaban, John Goodman, Jean Dujardin, Cate Blanchett, Matt Damon, and George Clooney, who also directed the movie. Clooney assembles a gang of New York art historians and architects near the end of World War II to ship off and rescue and preserve great works of art like the Bruges Madonna, paintings by Cézanne, Renoir, and religious triptychs. The Monuments Men is lightweight, lighthearted, and silly, more of a carefree redux of Stripes than the stately WWII drama suggested by its advertising. It’s a welcome surprise: the movie ambles without direction through mild slapstick and quaint play, a gang of seasoned and stressed A-list actors blowing off steam on a low pressure gut picture. It doesn’t take itself seriously, and Clooney and Damon’s non-acting isn’t annoying and doesn’t completely confirm your disbelief like they usually do—their personas are familiar, comfortable, and of a piece with the escapist mood of the movie.

Some of the only news coverage I could stomach of Hoffman’s death happened at the premiere of The Monuments Men last Tuesday. Everyone is at a loss for words, some ramble (Damon), others keep it simple. As Clooney says, “No one wants to be here tonight.” Murray, usually unflappable, cagey and dry, is genuinely sorrowful and shaken up. Ensconced in a relatively packed but quiet matinee audience, drinking espresso with my family, The Monuments Men felt like a balm for my soul, and for the first time in my life, I say thank you, George Clooney for making a nice little movie.