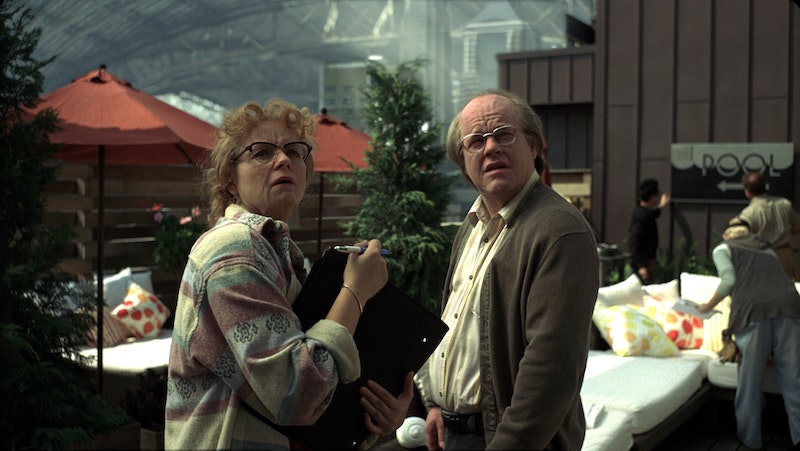 I haven’t watched any movies, clips, or tribute reels since Philip Seymour Hoffman’s death. The details are so grim and colossally sad. The premature loss of an accomplished actor in middle age who could’ve given another 30 years of masterful performances is awful, but it's nothing compared to the hell his family and close friends are in. What a horrifying and naked way to go. Even though he was candid about his past drug use and a relapse last spring, Hoffman was not a misanthropic melodramatic public spectacle with a death wish. He never appeared unstable even though his characters were often creepy, damaged, unbalanced, maniacal, or neurotic. This man did not want to die. He was an addict who fell off the wagon. He could’ve been shooting up for months before being killed by dope possibly laced with fentanyl last Sunday. The specifics hardly matter.

Synecdoche, New York had a more profound effect on me than any other movie I’ve ever seen. I remember feeling paralyzed—in awe, completely floored—when Hoffman’s Caden Cotard rests his head and begins to explain that he finally knows how to do the play of his life now, aged 90, and the picture slowly begins to fade white, and before Caden can elaborate, he’s cut off by the voice in his earpiece, his God now, with one devastating line—“Die”—and the screen washes completely white. If you’ve bought into the movie’s grand and surreal melodrama and black comedy so far, that scene and that final line are like a bullet in the head. It’s easily the most powerful moment of filmmaking I’ve ever seen—it leaves me with a lump in my throat and paralysis every time. Many don’t like this movie, far more haven’t seen it, but those who love it seem to have reacted the same way, that it’s a true epic of human emotion and loss and the search for meaning and the absurdity and coldness of the universe. If any of that stinks to you, you’ll probably hate Synecdoche, but its effect is incomparable if you buy into it. That same paralysis happens with nearly everyone I’ve watched it with—close to 60 people over five years—where no one says a word, even exhales, until well into the credits, often not until the movie is actually over. I’ve never seen anything like that.

Synecdoche is partly about the inevitably and unpredictability of loss, and there’s great irony in Caden complaining the whole time that he thinks he’s dying, that he’s sick, diseased, and in him living to 90 and dying a natural death. Synecdoche’s existential subject matter is heavy and bleak, but it’s also one of the funniest movies I’ve ever seen. It’s tremendously moving and sad, but in a really inspiring way, watching it always makes me want to make something new. This movie means more to me than any other piece of art, and I can’t say how Hoffman’s horrifying and dark death will change how I interpret an already morbid movie