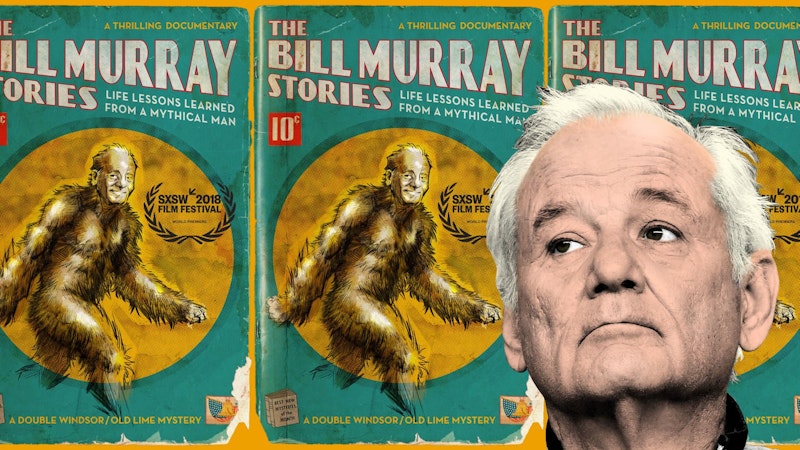 Bill Murray, one of the most famous movie stars in the world for close to 40 years, has more recently become well-known for an unrelated reason. He pops up unexpectedly in public places, like bars, basement parties, kickball games in parks, and other gatherings where legends of comedy aren’t expected to show their faces without warning.

Filmmaker Tommy Avallone, in his new film The Bill Murray Stories, takes a look at the phenomenon, traveling around the country (as well as the U.K.) in order to meet some of the people who’ve had Murray encounters. In the film, which debuted at South by Southwest in March and showed over the weekend at Cinemapocalypse 2018 in Chicago, is interspersed with footage looking back on Murray’s career, from SNL to his early movie roles to his late-career prestige comeback with directors like Wes Anderson and Sofia Coppola.

Meanwhile, Avallone tries to engineer a Murray encounter of his own, in order to get the star to explain what the deal is with his sudden appearances. I won’t spoil how things end up, although a picture of Avallone and Murray together has appeared in much of the film’s promotional material. And while the denouement of the documentary is somewhat surprising, it’s also the conclusion that ultimately makes the most sense.

The film also comes up with something resembling a working theory of what’s actually going on with Murray’s surprise appearances, tying it back to his improv background and a desire to revisit that sort of spontaneity.

The Bill Murray Stories may not answer all of your questions about Murray, but it does provide an entertaining look at one of showbiz’s most compelling men.

The Cop Baby’s a decent single-joke movie. B

The Cop Baby is an odd, Russian-language genre film that’s in the middle of an obscure festival run, but in reality it’s very familiar, as the sort of high-concept comedy that Hollywood used to churn out on a semi-yearly basis in the mid-to-late 1980s.

In fact, The Cop Baby, directed by Aleksandr Andryuschenko and also showing over the weekend at Cinemapocalypse, borrows from two of those 1980s genres: It’s both buddy-cop comedy and a body-switching comedy. (It also recalls the later Marlon Wayans CGI comedy Little Man, although this time the “baby” is a cop instead of a criminal.)

A cop, interrogating a criminal, gets pulled into a strange curse that has him switching his consciousness with that of an about-to-be-born baby, the son of a cop. Once the baby is born and starts talking, he’s soon inducted to the police, where his father is his partner. He “talks” and “moves around,” with the aid of some uncanny valley-type CGI.

So it’s basically Lethal Weapon, except there’s some sweet father-and-son stuff, and one of the partners is a baby (really, more of a two-year-old.)

It’s a single-joke movie, but the joke’s at least a good one: Through the 90 minutes of the film, the sight of a Russian man’s deep voice coming out of a mouth of a toddler never stops being funny.

The Cop Baby may not scream “international hit,” but I think it’s virtually certain to be remade by Hollywood within a year or two, probably with Kevin Hart playing the baby.