Could Dreyer’s avant-garde approach to telling a true tale of Christian martyrdom also work to immortalize the imaginary struggle for Satanic reincarnation? Tom Moore’s Texas lensed oddity Mark of the Witch (1970) proved that it could. 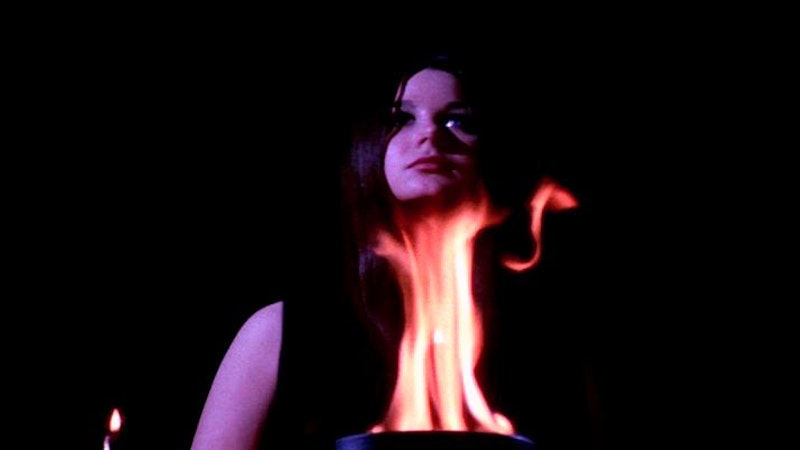 In November 2021, BFI published Alex Barrett’s article “4 Hard and Fast rules of filmmaking… and how The Passion Of Joan Of Arc breaks them all." The writer paid tribute to the unconventional techniques that characterized Carl Dreyer’s 1928 silent classic, summing up its impact by stating that the movie’s “cumulative effect moves the drama from the physical to the metaphysical. Dreyer once said that “the face is the mirror of the soul,” and “The Passion of Joan of Arc’s close-ups take us as near as cinema has ever come to rendering an inner life onscreen.”

What about an inner resurrection? Could Dreyer’s avant-garde approach to telling a true tale of Christian martyrdom also work to immortalize the imaginary struggle for Satanic reincarnation? Tom Moore’s Texas lensed oddity Mark of the Witch proved that it could. More importantly, Moore and screenwriters Mary Davis and Martha Peters expanded Dreyer’s weird cinematic language with vivid color, ritualistic drone music, and an amoral twist that transforms a mild-mannered kid into a supernatural icon.

Anitra Walsh plays Jill, a curious student who takes an interest in witchcraft after stumbling upon a moldering tome of spells buried in the stacks at a college book fair. She brings the spell book to a rager at hip professor Mac Stuart’s place. Stuart (Robert Elston) has a groovy guru’s knowledge of paranormal arcana, but maintains a square academic’s skepticism for it all. He’s a professor of psychology specializing in the study of superstition. He’s also the distant relative of the cold manipulative warlock Macintyre Stuart who hundreds of years earlier betrayed the trust of an enchantress known as The Witch. Stuart’s treachery sends her to a fiery death at the hands of zealous puritans. Screaming madly, in the throes of death, The Witch swears to return from the grave and take vengeance on Stuart and his ancestors.

Casually leafing through the spell book, Jill decides to try out a ritual meant to bring about telepathic contact with the dead witch. The spell’s weird anachronistic language conceals dangerous subtexts that end up causing the Stuart-hating sorceress’ spirit to take over Jill’s body and mind. From here, the vengeful ancient wanders through the psychedelic 1970s casually murdering, mesmerizing, and testing the extent of her power through deviant mischief.

There’s not much else to the story, but that spare nature only enlivens the abstract production design. It’s a pastiche of well-composed close-up shots, twisted cartoon histrionics, inventive camera angles, and other odd theatrics. The Passion of Joan of Arc’s hard focus on inner turmoil was heightened by the film’s static grey palette. Mark of the Witch takes those Dreyer touches and reinvigorates them with bright flashing color and hypnotic light to create a schizoid sprawl of inner confusion and chaos.

Anitra Walsh’s dual performance (as Jill and as the reincarnated Witch) is one of horror’s best kept secrets. Her frazzled meltdowns owe as much to youthful vigor as deep-seeded hatred. The actress’ full potential rests almost solely on her work in Mark of the Witch. In 1980 Walsh died at 32 under mysterious circumstances; she only acted in one other feature (a supporting role in Dealing, or The Berkeley-to-Boston Forty Brick Lost Bag Blues, a 1972 film best known for featuring John Lithgow’s first starring role). Walsh’s uninhibited power reaches its climax as the charming nerd-next-door Jill becomes flushed with evil treating a gnarly tree to a lusty night of devilish grinding lit only by the roaring flames of a campfire.

The film’s opening theme is a witch’s rune written by Walsh and sung by Trella Hart. It’s a stark bit of twee warbled in a voice as doom-haunted as Jill’s curiosity. Whitey Thomas’ minimal wave synth score stands with the genre’s best works; like Walsh’s rune, it also beams with a creepy balance of brittle melody and ominous drama.

The opening scene is a flashback. It shows little more than a grassy open field, an executioner’s platform, and the muddy feet of a peasant mob juxtaposed with tight reaction shots of Macintyre and The Witch. Here, Davis and Peters’ barbed Satanic prose shines thanks to maniacal actress Marie Santell, who plays The Witch circa a few hundred years earlier. Cosmic forces of vengeance electrify Santell’s oration: “…until the last star glitters from the sky, they will ponder my words until they gibber in madness!”