I Do Not Care if We Go Down in History as Barbarians is a superb 2018 film by Radu Jude, only now receiving a Region 1 Blu-Ray release. 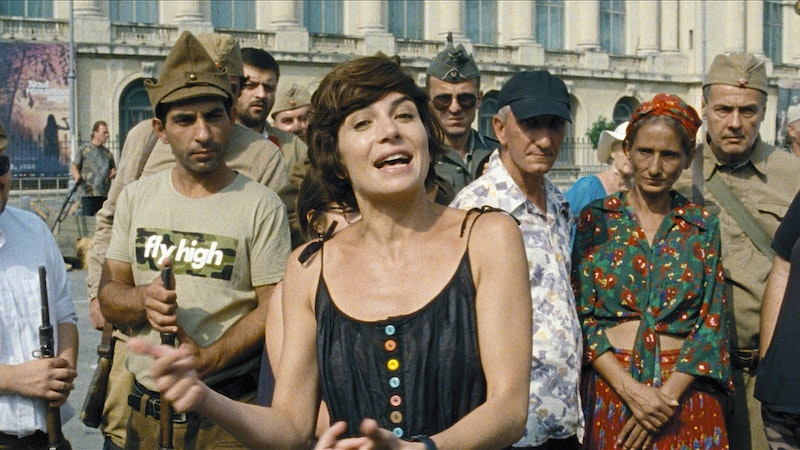 “If I had known, I never would’ve come!” shouts an indignant Romanian woman as she’s carted into an ambulance on a stretcher, “Not for a million dollars!” She just finished participating in a public reenactment of the massacre of Romanian Jews at the hands of their own government in October 1941. I Do Not Care if We Go Down in History as Barbarians, Radu Jude’s 2018 black comedy about modern Romanians reckoning with (or refusing to) the Odessa Massacre and Romania’s collaboration with Nazi Germany. Early in the film, this older woman and her husband are seen discussing the “event” with the planners—Mariana (Ioana Iacob) and Movila (Alexandru Dabija)—and she’s enthusiastic about playing a prisoner of war about to be executed, even miming her “mercy” routine: “How about like Ceaușescu’s wife at the trial? ‘No, I beg of you, do not tie me up, my children!’” They all laugh, because they all hate Ceaușescu—they lived through his reign. They don’t need to be reminded or convinced how awful he was.

But as with every country writing its own history and moving on from war, details are glossed over, even erased. It’s a familiar story: out of sight, out of mind, “never again,” “never forget,” blah blah blah, in other words, forget. The West German anthology film Germany in Autumn, conceived and filmed in the fall of 1977 immediately after the violent end of the Red Army Faction, was made with the same intention: instead of quickly dismissing the Baader-Meinhof group as deranged psychopaths and nothing more, the film—particularly Rainer Werner Fassbinder’s opening segment—argues that the fascism of the Third Reich is still present in all those who lived through it and even their children. Fassbinder, after haranguing his own mother about democracy—like a fascist—finally gets her to break down and admit that the “ideal leader” would be “a benevolent dictator who is kind and smart.” She smiles and looks down, knowing what she’s just said.

I Do Not Care if We Go Down in History as Barbarians deals with even more stubborn people, Romanians who largely weren’t around for World War II and have bought the propaganda wholesale from grade school on. It’s understandable to anyone who went through primary school in the United States and never learned about Juneteenth, Tuskegee, Japanese-American internment camps, or Woodrow Wilson imprisoning journalists during World War I. Forget about MKUltra or any American crimes post-Watergate: that’s still too hot to trot for high schools here. I wonder what Chinese students are taught about our country, and Romania for that matter. Barbarians isn’t a drag though: long monologues and static shots of photographs of mass graves may recall later Godard, but this movie’s closest cousin is Curb Your Enthusiasm.

Mariana’s insistent that their program include a section on the Odessa massacre. Movila pushes back, first as the event organizer, and then quickly as a Romanian, who feels put off and on the defensive by Mariana’s entire thesis. “Why do you want to rub this in peoples’ faces? You’ll make them feel terrible.” Mariana insists that they don’t know their own history, and it’s better to know what actually happened than to believe in a fairy tale. Particularly when you weren’t directly involved, but many of the Romanians participating in the reenactment start to get pissed, too: “What about all the Romanians who were heroes and shot in the air, and dropped their rifles?” Mariana reminds them that this was the exception, and despite protests and a few walk offs, the show goes on as planned.

At this point, the film shifts to a documentary style, moving from 24fps on film stock to 60fps on television cameras. The rehearsals, administrative discussions, and minor tiffs with props department (“Why did they send a black mannequin?”) eventually lead to a complete show. It’s hard to call it “great,” because it’s properly horrific: after watching Mariana go through real archival footage of mass graves and executions, we see them again acted out in the streets of Budapest in front of a huge city building, with lights, sound effects, projections, and pyrotechnics. Mariana expects some resistance from the crowd—who are largely real spectators, not actors—but far from protesting, they stay and watch and cheer the burning of Romanian Jews in a log cabin.

She’s upset, but not distraught by the end, and Movila and her wander off to have a drink and relax. As they walk away, the camera tilts up to a post where three dummies are hanging, swaying in the wind. These are realistic fake bodies, in full costume, and you don’t have to squint to mistake them for real bodies. The camera cuts to black and the movie ends. Jude’s film, released in 2018 and only now receiving physical media distribution in America, is in a class with Germany in Autumn, Spike Lee’s Bamboozled, and even Joshua Oppenheimer’s The Act of Killing, although again, the tone of this film is light compared to all of the above. But that’s only because time has passed, and even if all people haven’t forgotten, the world has, because time keeps moving. Jude holds on images of hanging posts, mass graves, and prisons instead of using hostile encounters with neo-Nazis and lazy Romanian apologists about WWII, and this combined with the situation comedy of the rest of the movie, makes for something unique—a film that makes it clear that there are no revelations or breakthroughs in everyday life, as in The Act of Killing, and life goes on, and it after so much, it becomes so easy to forget.