Turning Red is similar to Inside Out, in that it's mostly concerned with examining a girl's inner life. 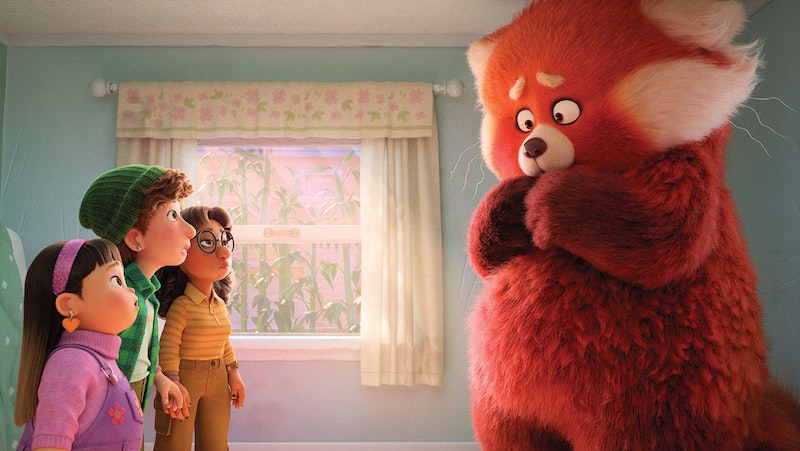 In the last two years, Pixar Animation Studios has produced some of its most inventive work, turning out strong original stories and getting away from over-reliance on sequels. Onward, Soul, and Luca were all examples of what Pixar does best—and their reward, from parent company Disney, is to shunt all of their releases straight to Disney+, even as films from Walt Disney Animation Studios, like last year’s Encanto, open in theaters. Now there’s Turning Red, another Pixar gem, that's also going direct to Disney's streaming service, even with the Omicron wave over. Turning Red is a unique and entertaining effort that continues the studio's recent hot streak.

Turning Red was directed by Domee Shi, and written by Shi and Julia Cho. One doesn't normally associate Pixar movies with auteurism, especially since the films are so collaborative, often have multiple directors, and semi-frequently see directors fired and replaced over the course of long productions. But here’s a filmmaker telling what's obviously a personal story. Shi is Chinese-Canadian, and at 34 was about the protagonist's age in 2002. She’s a longtime Pixar animator who previously directed Bao, the short that won the Oscar for Best Animated Short in 2018. Turning Red tells a story that's very much of cultural specificity, while exploring themes that have been part of movie storytelling since the days of The Jazz Singer. The film also channels Teen Wolf, in using transformation into an animal as a metaphor for puberty.

In Turning Red, set in 2002, Rosalie Chiang voices Meilin "Mei" Lee, a 13-year-old daughter of Chinese immigrants living in the Toronto area. Her mother (Sandra Oh) is demanding; her father (Orion Lee) is less so. Mei spends much time with her three friends, all of whom are obsessed with a boy band called 4*Town. Mei soon discovers that whenever she becomes emotional in any way, she transforms into a large red panda. This is the result of a family custom, which must be dealt with through a special ritual which conflicts with her beloved boy band's concert. The songs were written by Billie Eilish and her brother Finneas, as a reasonable approximation of pop music of the Backstreet Boys era.

It might sound a lot like Brave, which also had a red-headed young female protagonist and a character turning into an animal, but Turning Red has a vibe more similar to that of Inside Out, in that it's mostly concerned with examining a girl's inner life. The movie's conceit is an extended metaphor about menstruation, although younger viewers will likely relate to it as growing up. Even so, that would’ve been taboo in an animated film for kids, until relatively recently. It's also the old-time story of inter-generational strife. This makes the story of Turning Red more universal than the cultural specificity would indicate.