Moves at a clip even at three hours, and feels satisfying and complete in a way no "multiverse" film can ever be. 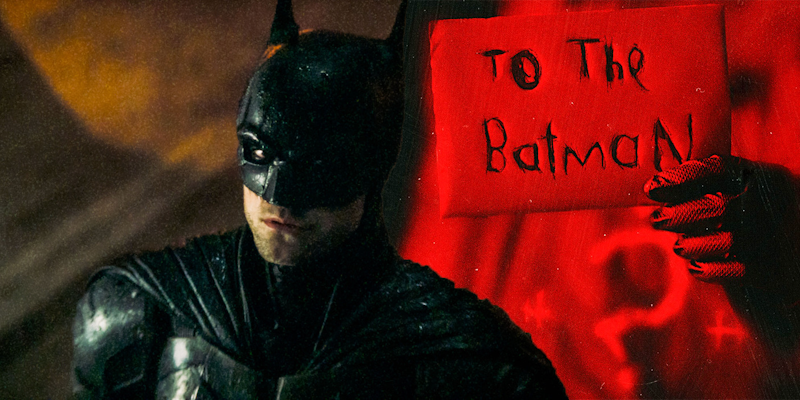 When Marvel, a comic book company, practically took over the American movie industry in the 2010s, superhero movies and movies in general have started to look a lot less like movies. Ever since the inception of the Marvel Cinematic Universe in 2008 with Jon Favreau’s Iron Man, the window for any kind of original expression or interpretation of a comic book character closed. Joker, despite flaws, was the only one that did something new, not only with a character that already had an iconic, Oscar-winning performance from another movie, but by effecting the real world in a way that no Marvel movie has. (Deadpool was not a subversive movie, it was a straightforward take on the character.) Joker is mostly mediocre, but it’s still one of the most important films of the last decade, both for its harrowing depiction of abuse, mental illness, and the failure of America’s social systems; and its gripping, anarchic ending.

Matt Reeves’ The Batman is without question the better film, if not more “important.” Those are movies like The Last Temptation of Christ, The Passion of the Christ, Fahrenheit 9/11, The Exorcist, Get Out, Deep Throat—beyond their merits, they prove that the medium can still scare people, and that it can still be quasi-dangerous. But Joker is a lot more fun to talk about than to actually watch, and besides weirdo one-offs like that, must all superhero movies be so lugubrious and ugly? No: The Batman has more in common with a typical political thriller from the 1990s or the 2000s than anything Marvel’s produced, and it must be stressed how well-made this movie is compared to everything else with capes. Too many big-budget movies look like video games, besides the MCU: Malignant and The Matrix: Resurrections were particularly egregious, along with their horrendous covers of the Pixies and Rage Against the Machine.

One of the coolest things about The Batman is that it has only two songs besides the orchestral score: “Ave Maria” and Nirvana’s “Something in the Way.” Unlike almost all contemporary filmmakers, Reeves doesn’t remix Kurt Cobain’s guitar or voice into some moody deep bass bullshit, he plays the song all the way through—twice. “Something in the Way,” the studio recording from Nevermind, bookends the three-hour film, the most satisfying and “complete” of all modern superhero movies. Sam Raimi’s Spider-Man trilogy is great, but those films suffer from a common problem: one villain at a time, one sidekick at a time, one love interest at a time. With three hours, Reeves is able to bring in The Riddler, the Penguin, Catwoman, the Joker, and of course Alfred, without feeling bloated or rushed.

The Batman is a model in pacing and tone, a perfect balance between the dead “dark realism” of Christopher Nolan’s Dark Knight trilogy—now rendered irrelevant—and the inherent silliness and leaps of belief that a comic book franchise brings. Reeves’ Gotham, modeled after Manhattan rather than Chicago, is a gloriously grim and grimy metropolis that looks a lot like Manhattan might in 30 years. We begin with The Riddler’s first kill, the Mayor, who leaves behind a boy just like Bruce Wayne. But we already know that, and we can begin with the movie. Paul Dano doesn’t really get to come out and act until the last 45 minutes, and even then he gets just a few solid scenes, but otherwise he’s obscured and covered up by tactical gear and a “costume” more fitting for a special ops officer than a villain best known for his bright green jumpsuit and orange hair.

Jeffrey Wright plays Commissioner Gordon, and Robert Pattinson plays Batman, although he too is hidden behind a mask and a voice (not nearly as weird as Christian Bale’s) for most of the movie. Zoë Kravitz as Catwoman has it both ways, and she’s served best by the constraints and benefits of the genre. All of the other costumes look bulky and a bit silly, but Kravitz pulls off walking like a cat without looking like an idiot, and that costume is simply more flattering than the winged tank that Pattinson practically lives in. Colin Farrell appears in an unrecognizable prosthetic turn as the Penguin, in this Gotham simply another mobster, not a deformed monster lurking the sewers. Better still is Peter Sarsgaard as the corrupt D.A., one of many corrupt officials that love to lurk in the “club within the club” at Gotham, where the elite go for drugs and illegal sex. The Batman’s social commentary is much more subtle and woven into the material than either Nolan’s films or Joker—without ever hitting you over the head, let alone making a point of it, this is a transposition of our current world into the parameters of Gotham. The movie ends with “Gotham Square Garden” flooded and full of refugees, an astonishing image, and “Something in the Way” recurs as the helicopter shot reveals Lower Manhattan, I mean Gotham, entirely flooded, everything below Canal St. gone. The Riddler, like Joaquin Phoenix’s Joker, screams about being an outcast and mistreated and abused and forgotten by a system that continually lied and promised to take care of him and all the other orphans.

“You had all that money to wash it down. Kinda made it not so bad, huh Bruce?” Dano gives a typically hysterical turn as The Riddler, and while Pattinson is very good as Bruce Wayne, we mostly see him as Batman, and who knows who’s under that thing for real. Even if it’s him, it doesn’t matter—none of the slouched, depressed, Cobain-esque mannerisms that he has in the Batcave around Alfred (Andy Serkis) are present when he’s in action. The only real problem I have with The Batman is it’s a bit under-lit in several dialogue scenes, mostly between Batman and Gordon. Reeves does an excellent job of creating a superhero world that also looks like a real place and more importantly a real movie and not a video game, but he underexposes faces like so many others, and it really wouldn’t take much to resolve the situation. It looks alright in a theater—alright at best—but at home, on a laptop, on an airplane? Forget it.

But these are not major sequences or characteristics that run through The Batman. Far from bloated, this movie uses its three hours to tell a full, pulpy, meaty story that doesn’t leave you bitching or waiting to see who’s gonna be in the sequel or what’s gonna happen. This was great enough on its own, a quality that far too few franchise films have. If superhero movies are going to be as abundant as Westerns, spy movies, or political thrillers, at least they should be this impressive.