The Sopranos Movie Isn’t So Great 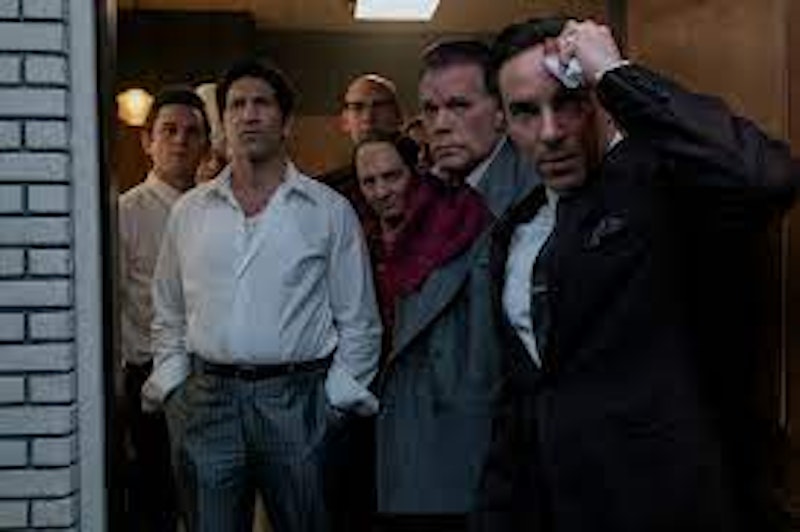 Sometimes you feel like you’re at the end of something. The Many Saints of Newark, a movie about the old days, comes very late in the game. It’s a prequel, but it doesn’t get back to original energies. The same cards are played again. There are ripe displays of fan service—Young Paulie preening his crest of hair, Young Silvio lugging his even bigger hair as he duck-waddles toward a waiting door. There are lines you pick out as echt Sopranos, which is a welcome exercise but still just an exercise. And there’s an intertwined pair of stories that braid human weakness to explain chaotic, helpless destinies. This last is expected of The Sopranos, but I wasn’t buying. Blame them or blame me, either way the movie felt very A Night in Casablanca. It was an evening of late-stage Marx Brothers.

A Night in Casablanca was a hit and the audience at Many Saints seemed happy enough. Jim Gandolfini’s kid did fine and so did the rest of the cast, the director, and almost everybody else. But not David Chase, who was the movie’s producer, chief scriptwriter, and mastermind. The creator of The Sopranos didn’t seem to have his soul lined up for this one. Possibly he’s tired; if so it was catching. I never disentangled the stories, and the sight of the male leads expressing themselves left me wondering when they’d stop.

An inmate frostily tells a visitor: “I don’t eat dairy.” That’s very Sopranos, but the time is 1975 and not 2003. Did this particular shorthand exist between men, and did it exist to the extent that a thug visiting a killer would be able to recognize it? The old Sopranos episodes made you feel like the writers knew how everybody talked. This sense is gone. Everything was done well, but nothing much worked. At times phrase and sentiment sound excessively on target: “The numbers? That’s the only way black people can make it in this city.” At others they just seem like things cool-guy Hollywood scriptwriters like to write when they get a chance. These bits crop up in the prison visits with the dairy abstainer. (“It’s the wanting,” the inmate says impatiently. “Huh?” says the visitor. The inmate: “The Buddhists will tell you,” and so on.) Then there’s the fan service. Livia says things just to be like Livia. Teenage Tony Soprano encounters a victim-to-be of his adult self, and the moment is done so heavily that we have a stunt on our hands.

A very Sopranos line: “I give you permission to picture her while you’re jerking off.” Also very Sopranos, in its way: “Vincent, it’s the news.” This second line sets up a scene that isn’t so much Sopranos as just the kind of thing that happens in ethnic crime movies when characters are gathered together. Lead enters, says how dare you play that TV set in this funeral home on the day of my, etc., and the TV set’s flying against the wall. One thing Hollywood teaches us: dark-haired men take an active dislike to appliances.

The dark bombshell girl from Italy, cutely: “Mutha-f’kuh, mutha-fuck-kah.” Like Apollonia in The Godfather (“Mawndy, Toossdy, Therssdy”). There’s so much obligatory pop nostalgia on hand that a neighboring film gets the treatment. One notices that young Janice Soprano is confirmed in the name of St. Apollonia. One notices too that Janice’s confirmation is held early in the film and resembles The Godfather’s wedding scene done Jersey-scale. Later on thugs and family are seated at the table and the presiding thug announces there’s no talking politics. A laugh goes up from the back reaches of the theater. It’s like the laugh for when Paulie was there with his comb, but not as big as the laugh for Silvio and his walk. That one’s the biggest of the night, and second place is “He doesn’t have the makings of a varsity athlete.”

Noisiest reaction, overall: the gasp and “Oh no!” that came on the plot’s key reveal. It was a hoarse “Oh no!” and the gasp arose all around the theater, so the film must have worked. I found the reveal so firmly rooted in known character behavior that it wasn’t really a surprise. I said to myself, “Huh, I wonder if it was…” and then came the big news and the gasp. This doesn’t happen to me too often, but the Sopranos film was like that.