Not Exactly Running Up That Hill

In 1982 Les Blank made Burden of Dreams, one of the few "making of" movies on par with their subject—in this case, Werner Herzog's Fitzcarraldo. 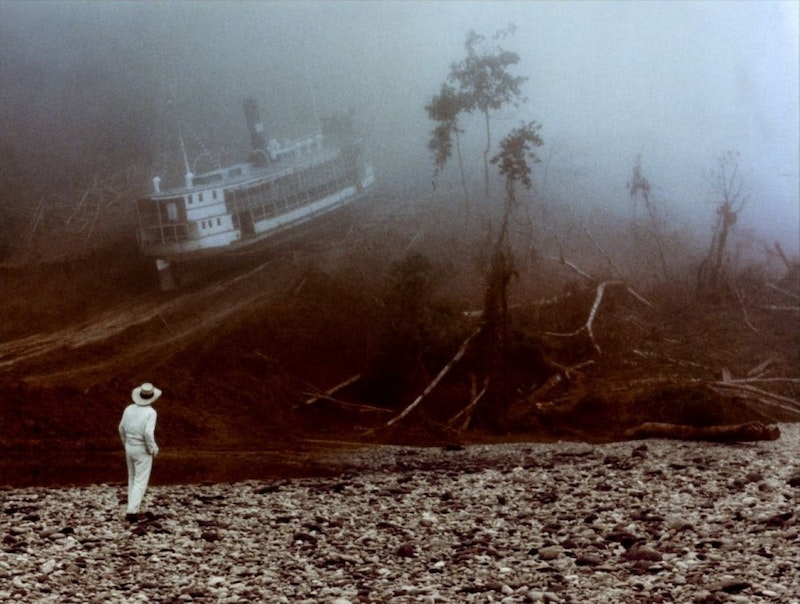 German filmmaker Werner Herzog has a unique habit of going to the end of the world when he makes films. When he made Fitzcarraldo (1982), Herzog might as well have gone to the end of the world, or at the very least, to the edge of the Amazonian jungle. But it isn’t only the edge of the natural world that he almost submerged himself into. He also walked to the edge of insanity. All of this was filmed by Les Blank in a documentary, Burden of Dreams (1982).

As much as Blank chronologically documents the troubles and triumphs of Herzog’s production, this is hardly a straightforward documentary. Blank’s nuanced and quiet vision captures more than mere “making of Fitzcarraldo.” Rather, this is a metaphysical journey of Herzog, Blank, the film crew, and the native people who were part of the production, not only as extras but as skilled (and unskilled) labor.

Fitzcarraldo tells a story of a rubber baron, Brian Sweeney Fitzgerald. A lot of the story was based on real events but Herzog’s aesthetic vision takes precedence over the reality of the story. Another aspect adds to the uniqueness and difficulty of this film: Klaus Kinski, who plays the rubber baron, and who was famous for his temper tantrums on the set. Herzog and Kinski worked together in five films, and much of their working relationship was mired by hate (Herzog made a documentary film about their relationship, My Best Fiend).

The entire metaphor of the film, as Herzog remarks in Blank’s film, is moving the steam ship across a mountain. As it’s to be expected from Herzog, he wouldn’t accept anything else but the authenticity of experience, and so he and the entire production crew moves a ship across the mountain. We become witnesses to the mad vision of Herzog, which obviously parallels with Fitzcarraldo. But this is where the comparison ends. Blank’s film about a film brings out not only the difficult aspects of filmmaking (especially in the jungle) but about being human.

He chooses not to elevate the irrational tantrums of Klaus Kinski, or even Herzog’s frustrations. Rather, Blank humanizes the production, that is to say, he allows everyone to be as fully human as they permit themselves to be. Blank’s an observer, whose lens isn’t moralistic, or even rationally judgmental. Instead of only following Herzog or Kinski around, Blank focuses the camera on the native people, their habits, reflections on the world, food preparation, even sex.

In one particularly funny scene, two women bicker about a man. It appears that one woman has seduced the husband of another woman. They’re screaming at each other in their native tongue. They’re keeping a distance. One’s holding a baby and another a knife. This is a tense moment, until it’s fairly quickly resolved: the woman who has been cheated on doesn’t want the husband anymore. Quite unexpectedly, women in this culture have a lot of power over men. There’s a sense of constant survival and risk-taking, something Herzog is familiar with, but from an entirely different perspective and metaphysical plane.

Blank also wonderfully juxtaposes the brutal and merciless natural world that the crew is surrounded with. As Herzog struggles to explain to an engineer that he has to take more risk in order to move the ship, as he instructs the natives in how to approach the steamship in their canoes, as he clashes with his own German crew, Blank films the crawling ants. These seemingly unimportant creatures keep moving fluidly with the landscape as Herzog and the crew try to conquer it.

According to Herzog, Kinski said that the jungle is “erotical.” But for Herzog, it’s anything but that. It’s the landscape of “fornication” and “asphyxiation.” He’s angry, but so delightfully morose. Herzog’s vision is not nihilistic but heroic. Blank’s film asks what kind of heroism are we witnessing here? Is Herzog going too far, and should he have just made a film in a Hollywood studio with plastic model ships? The answer is unequivocally no.

Are we capable of having experiences like this anymore? Do we have an innate human desire to explore and to be heroic? Globalism has opened up our world, and yet, everything’s cramped, tight, and dull. Do we have the courage to embrace our otherness and foreignness, as well as that of the wholly other? How do we make sure that our metaphysical structure doesn’t collapse or that the metaphorical chains that are pulling the ship across the mountain don’t break?

At the very end of Blank’s documentary, Herzog reflects on the completion of the film, as well as his vocation as a filmmaker. “It’s not only my dreams,” says Herzog as he swats flies of the Amazonian jungle. “My belief that all these dreams are yours as well. And the only distinction between me and you is that I can articulate them. And that is what poetry or painting or literature or filmmaking is all about. It’s as simple as that. And I make films because I have not learned anything else. And I can do it to a certain degree. And it is my duty because this might be the inner chronicle of what we are. And we have to articulate ourselves, otherwise we would be cows in the field.”

We can’t have complete certainty in life, or else any risk we take would be meaningless, and definitely not heroic. But there’s a responsibility that’s attached to being human, and it involves a rejection of desperation. What we see in Blank’s film is indeed a burden of dreams, yet Herzog’s journey is inescapably human, and for someone like him, inevitable. Almost all of Herzog’s films have a mystical dimension that reaches into another plane of existence that we weren’t aware of but that we suddenly recognize as our own. Herzog’s impossible journey into the unknown is our metaphysical and symbolic journey as well.