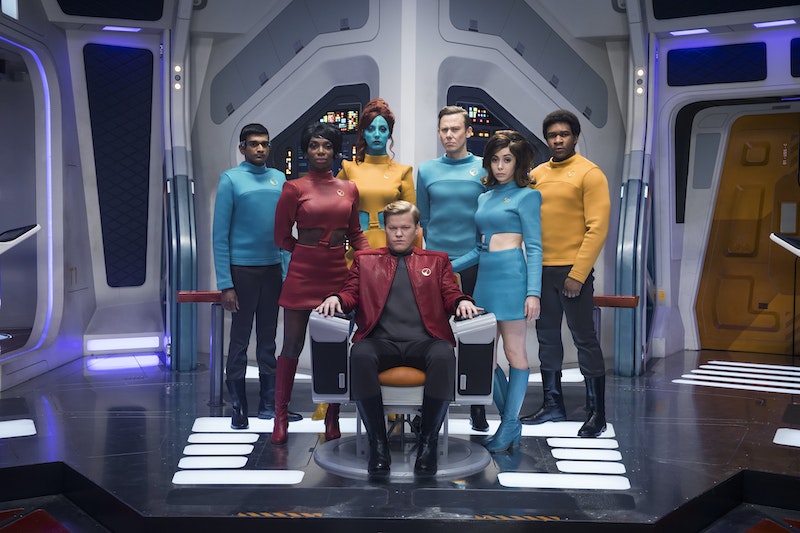 There have been many fine Shatner imitations and a load of passable ones. But all of them have been impressions, mere comedy turns. Now we have attained Shatner: The Next Level. Thanks to Black Mirror, we have an imitation Shatner performance. The sci-fi series begins its new series with “U.S.S. Callister,” an episode built around a nightmare Star Trek pastiche that itself is built around the top-notch pseudo-Kirk. This Kirk is provided by a young actor named Jesse Plemons. Plemons starts with the right height and physique (box-like), and he has a profile that could pass for a blunter, less lovely version of the original. Some of the things that he adds to this physical equipment: Shatner/Kirk’s half-lifted eyebrows and merry, quizzical air; the briskness of the step with which he swings his stubby body from elevator to command chair; his easy but alert slouch once in his seat.

Plemons’ one flaw is the lack of resonance in his voice. Shatner/Kirk had a strong tenor; Plemons’ voice is thin. But big deal. His work is so good that after a while a surprise sneaks up on you. Unlike any imitation Shatner in history, he doesn’t lean on the jerky, up-and-down, stop-start intonations that we take to be the whole point of a Shatner turn. That note is certainly present, as when Plemons says, “Youuu are... defeated, Valdak.” But it comes and goes, like the traces the score bears of Star Trek leitmotifs. Instead the actor slides into Shatner vocalisms that haven’t been showcased. Notice the speed with which his crisp “Thank you” cuts in after a subordinate’s status report. Hear his swift crowding of syllables that makes a clumsy line sound offhand, as with “Perfect opportunity to prove your more than recommendation from Space Fleet.”

One reads that the actor was helped by a vocal coach, and that the director told him to go easy on the stop-starts. Fine, it was a team effort. The director, Toby Haynes, stresses that the episode’s many shrewd production touches were thought up by the people working on makeup, costumes, and decor. Together everyone pitched in and produced what normally might have been a geek’s obsession, the living replica of a TV series that was canceled 49 years ago.

Of course, some of the biggest Trek echoes are in the script, written by Charles Brooker and William Bridges. The characters are trapped by an omnipotent being who’s a dangerous child; consider “The Squire of Gothos,” “Who Mourns for Adonais?,” “Charlie X,” “Plato’s Stepchildren,” and many other Trek episodes. As in “Charlie X,” a woman’s face is turned into a blank oval. As in “Plato’s Stepchildren,” the captain and a black subordinate kiss. We’re assured that there are no tongues, which I like to think is an homage to the memos that the network used to send Star Trek’s producers (“Avoid the open-mouthed kiss”).

As so often with Trek, the characters spend much of the episode trapped in a single space and milling about there. This time it’s the ship’s bridge, which looks like the Enterprise’s bridge but with the knobby, buttressed walls found on a Romulan or Klingon vessel. Sharp-eyed people have noted that the bridge’s lighting resembles the lighting that Trek used for scenes aboard enemy craft, and that this plays into the sinister air hanging over the pastiche. Perhaps the decor is a similar touch. Still, it goes contrary to the original show’s aesthetic, which held that earth style had a lot of streamlining in its future: no zippers or pockets, and plenty of smooth walls and unobtrusive angles and curves. Oddly, the bridge’s layout assigns a place off to the side for the crew station that fires the ship’s weapons; dramatically, the only place that makes sense is between the captain’s chair and the view screen. Even odder, the bridge has a wet bar.

Finally, there’s no Spock. There’s an alien officer and there’s a science officer, but that doesn’t add up to a Spock. Still, is this absence a flaw? Perhaps it’s more like the downplaying of the Shatner stop-starts. So much is done well that there’s no need for what used to be a Trek touchstone. In a way, “U.S.S. Callister” marks the triumph of Kirk. When Star Trek first aired, Spock crowded the popularity and screen time of the program’s supposed lead. When Trek settled into syndication, Kirk began to gain back ground with the fans: repeat viewers seized on favorite bits they could recall and mimic, and Shatner supplied plenty of them. Now the decades have passed and the future is getting near. A pop empire has piled up around a show that used to survive on black-and-white sets watched by college kids. A team of professionals devoted themselves to a duplicate of that show, a duplicate spearheaded by the second-finest Kirk we’ll ever know.