“Arkangel” is the best episode of Black Mirror Season 4. 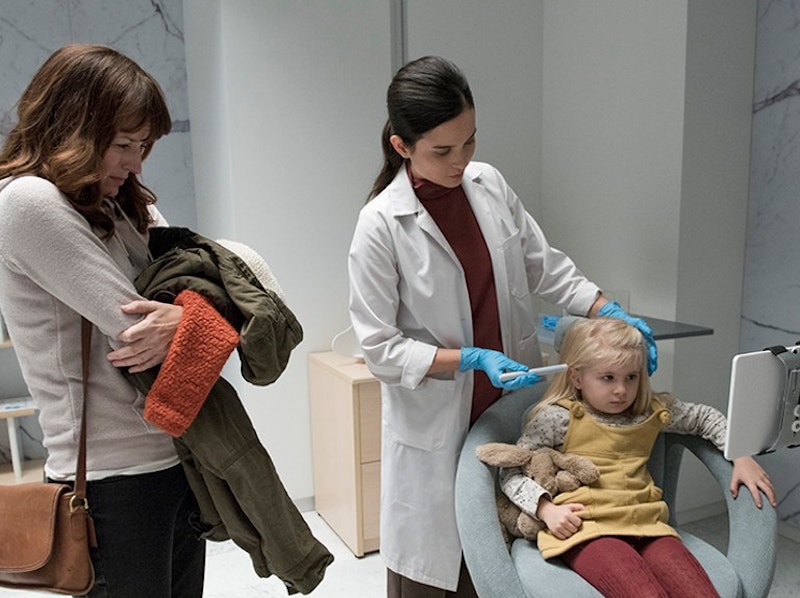 Temptation is everywhere, in myriad forms. Your conscious mind says a declarative “no,” but some dark element, deep inside, mutters a yielding “yes.” To be honest, far too much of life consists of temptation management—staving off the urges to light up another cigarette, to recklessly procrastinate with deadlines approaching, to eat dangerously, or to tell a co-worker or a stranger, in no uncertain terms, to get fucked. There were a few years there where my son wanted, desperately, to understand everything that was happening or being said within earshot, regardless of whether it was relevant to him or not. “Fear of missing out” (FoMO)—it even has a Wikipedia entry—his mother would murmur, arching an eyebrow.

Temptation and FoMO collide, messily, in Black Mirror’s “Arkangel.” After her young daughter, Sara, briefly goes missing from a public park, Marie (Rosemary DeWitt) enlists the aid of a company named Arkangel. An inextricable chip is implanted in Sara’s temple, and Marie receives a tablet she can use to monitor Sara’s vital signs, distort her ability to experience certain things, and see through her eyes; all of this comes gratis, as part of an experimental trial. Given that so much of modernity is centered around convenience—the fact of convenience, and, honestly, some imagined inherent right to convenience—it isn’t difficult to imagine a future where Arkangel reigns supreme. A technology that acts as protective shield and monitor alike; all reassurance, all the time. This, surely, is a single parent’s wet dream, right?

Wrong. This is an episode of Black Mirror, one strung out over 15 years. The Sara we meet early on—whose exposure to a high-strung neighborhood dog is weirdly muted and blocked—grows into a sheltered teenager (played by Brenna Harding) with a warped relationship with the world’s stimuli. Blood, violence, medical emergencies, and sex become complicated mysteries and complications; a child psychologist is retained, who advises Marie to stop using the tablet. That’s the best advice possible, but, again: temptation and FoMO. In the actual present, Twitter and Facebook are the lures; in this what-if future, the lure is a window into a daughter’s burgeoning young womanhood.

“Arkangel” is agonizingly patient; there’s a great deal of care, in terms of score, pacing, and setting, building small-town stakes around a mother and daughter who live together but aren’t as close as they should be. One gets the sense that Marie and Sara aren’t talking enough—that the technology acts as an inferior stand-in. Director Jodie Foster and screenwriter Charlie Brooker succeed at investing the audience in what’s at stake, sneaking subtle clues into visually repetitive tics representative of middle-class family life’s essential monotonies.

That this won’t end well is obvious early on. The technology is a prime thread; Sara our blameless victim. But Marie is almost more interesting to me, because the convenience and availability of Arkangel—that damn tablet eventually finds its way out of the attic—seems to preoccupy her in a way that isn’t healthy for her. DeWitt plays middle-aged Marie as a woman who hasn’t found a way to forge any true sense of self outside of a motherhood that’s more managerial than nurturing, or is incapable of it; there’s something dead and lost in her eyes as the episode advances, and the metamorphosis of a relationship with one of her physical therapy patients somehow strikes one of this series’ sourest notes.

When “Arkangel” crescendos in naked symbolism, it feels earned and iconic; parents may wander away dazed, overcome with perspective, in need of libation. And while what happens to that tablet will remain in my sightlines for an uncomfortably long time, I keep thinking about the moment when Sara gets hold of the tablet and we stare briefly, through her inflamed perspective, into a mind-bending vista of infinity.