The Mediocrity of Black Mirror

"Arkangel" sums up everything wrong with the anthology series. 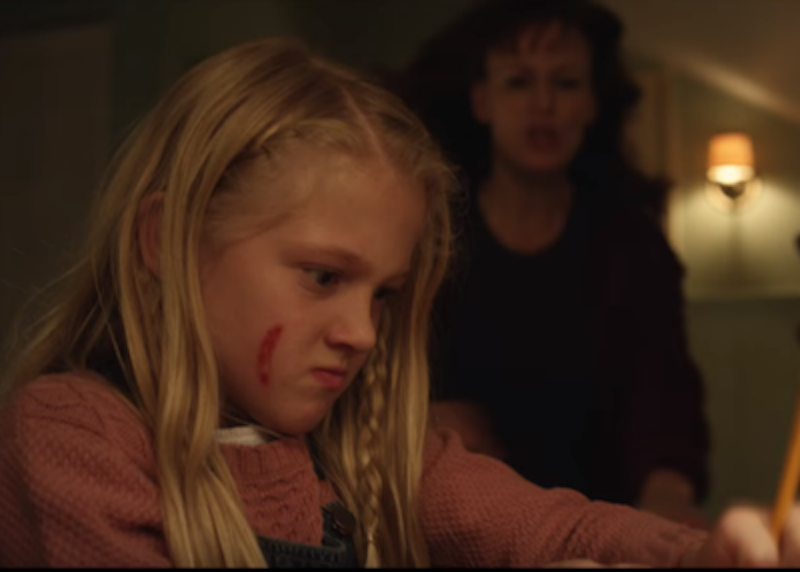 Black Mirror is the clickbait of quality television. The anthology science-fiction series is widely lauded for its bleak near future vision of a world in which slightly advanced tech makes everyone's life exponentially worse. But the truth is most of its episodes are built around the equivalent of high concept moral panic. "Social Media Shaming Is Getting Out of Hand." "Facebook Likes Are Corrupting Our Society." It's a shallow show that hacks the media economy for shares by bemoaning the shallowness of the media economy driven by shares.

"Arkangel," the second episode of the fourth season, sums up the formula with wearisome predictability. The episode is about a new experimental bit of future tech (Arkangel). Doctors inject some ill-defined sensors into a child's skull, and this allows parents to monitor their kid's every move. Parents can locate their child on a map, and see through their child's eyes. They can put in place parental controls, so that whenever a child sees something disturbing—barking dogs, blood, porn—the parent can blur it out. If the episode had been an Atlantic cover story, it would’ve been called "Has Helicopter Parenting Gone Too Far?"

Of course, the answer to that question has to be "yes" or why even bother asking? And so, writer Charlie Brooke and director Jodie Foster give us an over-protective single mother (single mothers are always over-protective of course) who hooks her daughter Sara up with Arkangel. Kept from violent stimulus, the daughter is inevitably attracted to violence, sex, and drugs. Marie, the mom (Rosemarie Dewitt) becomes more and more frantic and controlling as her daughter, Sara, (Brenna Harding) has sex and does cocaine, until finally daughter rebels in the expected crescendo of violence.

The moralistic script is as predictable as a holiday special, though the message is supposed to be the opposite of the usual television conclusion. Black Mirror is in theory edgy, so instead of hectoring you to be nice, "Arkangel" hectors you not to be too nice. Smothering censorship is lazily conflated with mothering via the usual misogynist calculus. Marie's crusty old father provides the dose of male patriarchal common sense as he expresses skepticism of Arkangel. When he has a heart attack while teaching Sara to paint, the child's parental controls cause him to blur out; she can't see him as he dies. Arkangel is meant to keep Sara safe, but it can't protect her from tragedy. That's irony. Black Mirror loves irony.

Irony is all that "Arkangel" has going for it. The characters—over-protective mom, rebellious daughter, wise old grumpy grandpa, ineffectual boyfriend—aren't people so much as familiar chits which move about the screen in the interest of the lesson of the hour. If this was a feature length article in a major magazine, it would presumably have statistics and expert testimony—do kids actually have less unsupervised time alone now? Is there any evidence that this causes developmental problems? Is this a function of over-protective moms, or is it something enforced by our ugly paranoid policing regime? (I've had police try to scare me because they didn't think my parenting style is sufficiently authoritarian.)

But "Arkangel" deftly sidesteps both the imaginative commitments of fiction and the intellectual obligations of reporting. Shorn of aesthetics or research, it exists as pure parental shaming. The episode might just as well repeat, "Kids these days have gone soft!" for 50 minutes. Except that would be sort of weird, and would take more gumption than Black Mirror has ever shown.

I don't necessarily disagree with the broad point the episode makes. My parents gave me a key to our house and would leave me alone when I was seven; no harm came and I don't think they were negligent. My wife and I don't put restrictions on our 14-year-old's social media or viewing habits, and don't invade his privacy. Our society doesn't treat children with enough respect. I agree with that.

So it's not the message in "Arkangel" I object to. It's the condescending smugness. "Arkangel" feels like being stuck in a comments thread with that nattering blowhard, who runs through the same tired talking points over and over, without ever pausing to listen or think. "Parents these days! Am I right? They're turning kids into little snowflakes; why back in my day…" And so on. Some Black Mirror episodes are better and some are worse. But that preening monologue is almost always in there.