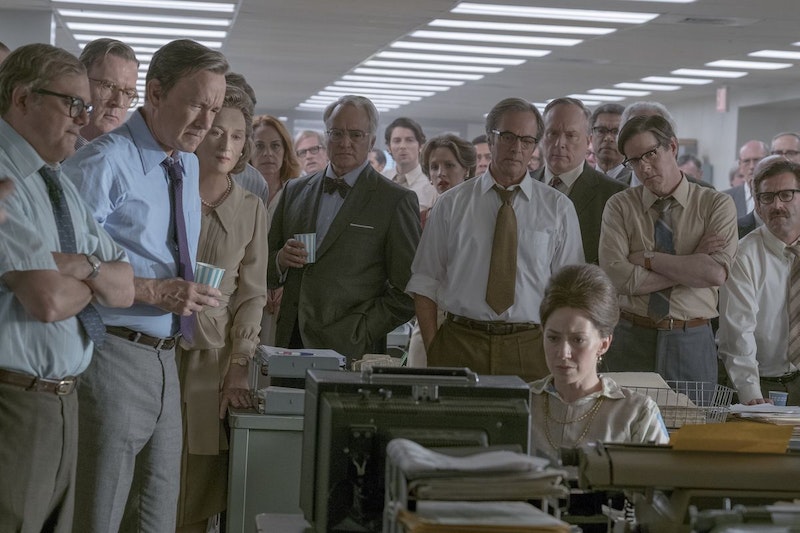 A few weeks ago I was in a hotel and I turned the TV on and a commercial for Steven Spielberg’s The Post popped up already in progress. Reporters chain-smoking, pecking away at typewriters, and frantically rushing around the newsroom of The Washington Post in 1971. Cut to a medium close-up of Ben Bagdikian (played by Bob Odenkirk) telling one of his editors that he “always wanted to be part of a small rebellion.” Cue the thundering John Williams score, and then a gravelly voiced intonation of the title, as if The Post were a new Jason Bourne movie. Like Spotlight two years ago, Spielberg’s film is mostly hagiography and hollow nostalgia for the bygone days when newspapers “meant something,” days when newspapers were still around and papers much smaller than The Washington Post had bustling newsrooms and ethics were paramount. Meryl Streep and Tom Hanks star as Kay Graham and Ben Bradlee, respectively, and in just under two hours, they debate the merits of paying reporters with callous moneymen who don’t want to take the company public, they risk committing treason and going to prison for the rest of their lives, and Graham, along with Bradlee’s wife Tony (Sarah Paulson), challenge gender roles at a time when women’s lib still hadn’t liberated as many housewives as they’d hoped. It’s a lot to tackle in such a short amount of time, and although The Post isn’t the laughable masturbatory disaster I expected, it doesn’t amount to much, and serves its source material poorly—a shallow once over of something very important and relatively nuanced.

At least Spotlight had focus: sure, it practically bestowed sainthood on the staff of the early aughts Boston Globe, but it was steadfast in reminding us of all we’ve lost in the digital age. Less than a dozen beat reporters working on a story for years, pursuing every loose end and knocking on every door and calling every number they could find, all in the service of exposing coverups of systemic child abuse and silencing that went on for generations in Boston’s Catholic churches. An organization heretofore beyond reproach brought to its knees and forever tainted, all due to a band of plucky reporters that were relentless in chasing down a story and getting it right. They were depicted like superheroes, and that last shot of Michael Keaton picking up the phone in the dingy Globe office and answering “Spotlight” as if he were still in his Batsuit—I mean, it was so ridiculous, so over the top, but the stakes were so high, that a pat on the back and some slap and tickle were in order. It made sense.

Even though the publication of the Pentagon Papers was just as shocking and important as the Globe’s expose in 2002, Spielberg’s film is too scatterbrained to give it the gravity it deserves. The Post wants to be about newspaper nostalgia, but it also wants to be about the importance of whistleblowers, but it also wants to be a feminist movie. That last aspect is given such short shrift and is so awkwardly shoe-horned in: at the end, there’s a tracking shot of Graham walking through a throng of female protestors. But for whatever reason, all the extras they got that day look totally dead-eyed and glazed over on camera, so Meryl Streep finishes her work in The Post walking through a bunch of feminist mannequins that look like they just took three bars of Xanax to the head.

Another issue—and this isn’t the film’s fault necessarily—your average American moviegoer in 2018 probably doesn’t even know what the Pentagon Papers are, or that the “scandal” happened at all. Everyone remembers Catholic priests molesting altar boys, but Daniel Ellsberg? Ben Bradlee? Kay Graham? Even Robert McNamara. Spielberg ends The Post with a helpful and obvious cue: Frank Wills calling the police after he finds evidence of a burglary in the Watergate Hotel. At the screening I went to, the otherwise sedate crowd all went “ahh!” and there were scattered claps. Like, maybe three, four tops. Empty sympathy for reporters and “the way things used to be,” but The Post was preceded by a much better example just two years ago, and will be forgotten faster than its subjects in time.