Cameos by characters actors barely save the film. B- 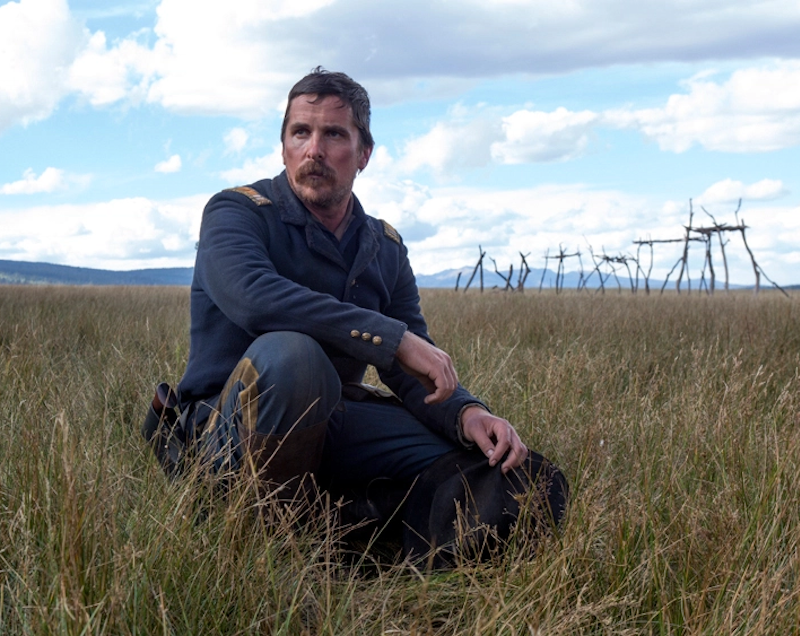 A little over ten years ago, there was a film called 3:10 to Yuma, a Western, filmed in New Mexico, starring Christian Bale with a supporting part for Ben Foster. What I remember most about that movie, a remake of an Elmore Leonard-derived 1957 film, was that it was notably average.

Now, we have Hostiles, another Western, also starring Bale as well as Foster, and also filmed, at least in part in New Mexico. Directed by Scott Cooper, it isn’t quite as forgettable—it’s got some interesting if well-worn ideas, and standout small performances by about a dozen character actors. But like 3:10 to Yuma a decade ago, it’s very average.

Hostiles is set in the 1890s. Bale plays a veteran, decorated Army captain, nearing retirement, who’s ordered, over his strenuous objections, to escort an elderly Cheyenne war chief (Wes Studi), along with his extended family, from New Mexico to Montana.

Bale brings along a crew, including Jesse Plemons, Rory Cochrane, and Call Me by Your Name star Timothée Chalamet, and they later stumble upon a woman (Rosamund Pike) whose husband and children were slaughtered by marauding Cherokees.

The film is largely about contending with the violence of the past and prejudices of the present, and forming unlikely bonds. Not the most groundbreaking stuff, but it’s done well here. The drawbacks? The movie is too long, too slow and there’s not much inventiveness in the filmmaking. The couple of brief action sequences are distractingly choppy.

It’s also not one of Bale’s better performances, mostly monotone and not conveying much of an inner life for the character. Pike is better, and her conveyance of pain is very real. I’m not really sure why she pretty much disappeared after her career part in Gone Girl, which was now almost four years ago.

Most of the joys found in Hostiles are from the supporting performances, although the film does very much overuse the trope of a character showing up, saying his piece, and then getting shot dead almost immediately afterward.

Cochrane, Studi and Plemons each get a strong monologue, as does Foster, while the likes of John Benjamin Hickey and Stephen Lang have brief turns as authority figures. Q'orianka Kilcher, who you may remember as Pocahontas in Terrence Malick’s The New World, has a mostly unspoken part. Ryan Bingham, who wrote the music for previous Cooper film Crazy Heart, shows up to sing a song, and I Bill Camp’s brief turn as a smug journalist was my favorite part of all.

Hostiles is better than Cooper’s last two films, the 2013’s Out of the Furnace and the embarrassing missed opportunity that was the 2015 Whitey Bulger film Black Mass, which took a fascinating true story, based on a suburb book, and turned it into a hash of crime film clichés. But Hostiles isn’t quite up to the par of Cooper’s 2009 drama Crazy Heart, the film that won Jeff Bridges his long-awaited Oscar.