On Long Shot and Knock Down the House. 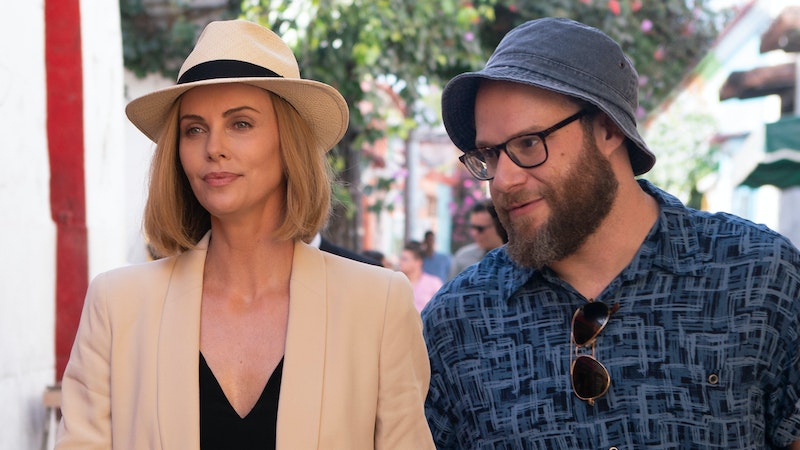 Long Shot, a new romantic comedy starring Seth Rogen and Charlize Theron, tries to do three different things, with varying degrees of success. It's a traditional romcom that also says a lot about media and politics, while at the same time serving as a plea for reconciliation between the Hillary and Bernie wings of the Democratic Party.

The film, directed by Jonathan Levine, comes with the highest of high concepts: Theron plays Charlotte Field, the sitting Secretary of State of the United States and possible presidential candidate. She's a younger, unmarried version of Hillary Clinton, a onetime idealist prone to frequent compromises due to her political ambitions and the realities of being a diplomat. Rogen is Fred Flarsky, a bearded, slovenly Brooklyn creature who works as a left-wing alt-weekly journalist. He's the kind of guy who would probably instinctually despise the Theron character, if she hadn't been his one-time babysitter, on whom he nursed a longstanding crush.

He's soon hired as her speechwriter, which predictably leads to an odd couple romance. Can love bloom between the poorly-dressed leftist beardo and the statuesque neoliberal diplomat, especially under the prying eyes of the media? The romance angle mostly works, if you can get past a couple of things: That it's a fairly standard, Apatow-style romcom plot in which the man needs to grow up and the woman needs to let her hair down and learn to have fun. Twelve YEARS after Knocked Up, 37-year-old Seth Rogen is still playing the guy who must mature in order to win the love of a tall blonde woman who's out of his league.

The leads are charming, have chemistry, and unlike, say, The American President, the film is about a scenario—potential president dates an alt-weekly slob—that would be controversial if it happened in real life. However, the gags are much more hit-and-miss, especially a cringey sequence in which Theron has to solve an international crisis while high on molly. I also couldn't help thinking that the arc Veep did a few years ago in which President Selina Meyer dated a steakhead personal trainer (played by Christopher Meloni) was a much funnier and biting version of this story. Meanwhile, one would assume that a Secretary of State having a relationship with a direct employee would be a huge no-no in the eyes of the government, but that goes unremarked upon in the film.

The political part of the story, meanwhile, is more of a mixed bag. Long Shot has a good point to make about the unfair ways in which female politicians are judged. But other targets of the satire are less successful. Bob Odenkirk is mostly wasted as the current president, an actor who used to play the president on TV, got elected for real, and is eager to get back to acting, in a gag that isn't nearly as funny as it sounds. Andy Serkis plays a Rupert Murdoch-like evil media baron, whose plot starts out promisingly but ends up laughable.

The ending is unconvincing. Like the current season of Billions, this film is of the questionable belief that if a politician were to get up and give a speech in which they admit shocking sexual secrets, doing so would redound to their political benefit. Other than Rob Ford, I don't remember that ever happening in real life. The film splits the difference between the worldviews of the two characters in a way that's not likely to make anybody happy. B

And speaking of new movies about attractive female politicians whose romantic partners are bearded Brooklyn hipsters much less famous than themselves, let's talk about Alexandria Ocasio-Cortez, and her new documentary Knock Down The House, which debuted on Netflix Thursday.

The film, directed by Rachel Lears, followed four women in different parts of the country who challenged incumbent members of Congress from the left. Three of those candidates lost, but the fourth was AOC, and Lear's cameras had a front-row seat as the 29-year-old former bartender knocked off longtime incumbent Joe Crowley.

The film gives a first-hand look at AOC's unique political talents and skills. But it doesn't shed new light on AOC's rise, or show us much that we didn't already experience less than a year ago. Normally it would be surprising to get a look inside the home life of such a political figure, but in AOC's case, we've already seen that, from her popular Instagram stories that she does from her kitchen. But we’re introduced a bit to Riley Roberts, the longtime male romantic partner who's often by the Congresswoman's side.

If you're looking for a doc to watch about a controversial Democratic House freshman who's a regular part of Republican nightmares, I recommend Time For Ilhan, Norah Shapiro's documentary about Ilhan Omar. The film, which is about Omar's first election for the state legislature in Minnesota back in 2016, provides more of a street-level look at the district Omar was running to represent than Lears' film does at any of the areas in those elections. Time For Ilhan is streaming on Amazon Prime. B-