Platitudes on the Loose

Luce is a stilted and stale Obama era thriller with nothing new to say. D 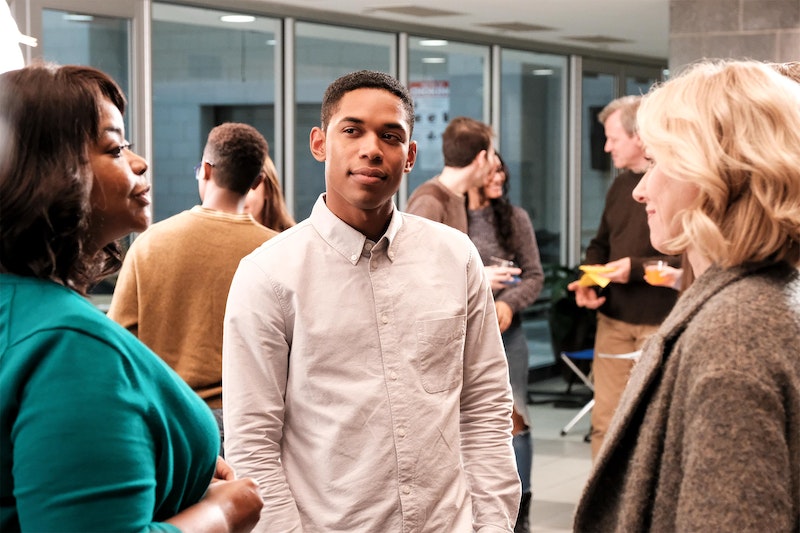 Praise for Julius Onah’s Luce is inexplicable—who falls for this shit? Co-written by Onah and JC Lee, Luce is a mess of a message movie, waterlogged with talking points, hashtags and sociopolitical commentary written with the subtlety of a sledgehammer. Despite a confounding trailer that did its job—confused and motivated me to see the movie—Luce never lives up to whatever it’s letting on, letting so much accumulated tension evaporate and make a movie shorter than two hours feel like an Arthur Miller play.

Of course Luce started as a play (also by Lee), and of course there are patronizing nods to a post-#MeToo era: early on, Naomi Watts chides her son and her husband for using the word “bitch.” It’s not done in a gesture, a line, an equally pithy comeback, no: Watts launches into a jumble of buzzwords—“misogynistic gendered language othering…” before trailing off, the same trajectory that Luce takes through its interminable 110 minutes.

Watts plays Amy Edgar, whose adopted son Luce (Kelvin Harrison Jr.) is a star student at a Northern Virginia public school. He was born and lived in Eritrea for seven years before being shuffled through the American adoption system until he was taken in by the Edgars at 10. Husband Peter (Tim Roth in typical form, affable and laconic) is the laidback counterpoint to Amy, the recognizable archetype of the high-strung helicopter wine mom. Luce is populated by archetypes and dominated by stale discourse about race relations in a privileged neighborhood. Just like Jonathan Franzen, Amy wanted to adopt a child from a war zone and Peter just went along with it—he screams toward the end that he, “just wanted a normal, sane, fucking life! Not everything we do has to be some political statement”—but after nearly a decade of therapy and acclimation, Luce has reached adulthood a model citizen, speaking perfect White American English, able to code switch and act (as he makes explicit at the end) on command. He does it with aplomb, but the movie only shrugs towards Luce’s sociopathic capabilities. Luce’s ambiguity is thin but it’s the only thing keeping this movie from completely falling apart under the absurdities of its script.

His history teacher Harriet Wilson (Octavia Spencer), sees Luce hanging around with “the wrong crowd” and tries to intervene, blackmailing him and implying to his mother that Luce not only wrote an essay justifying “cleansing violence,” but that he had “illegal fireworks” stashed in his locker. The phrase “illegal fireworks” is repeated ad nauseam to the point of absurdity, the most deformed jag sticking out of one of the clunkiest scripts I’ve seen on screen in some time. Onah and Lee’s dialogue is stilted, bloated, and blindingly obvious, written with all the clarity and fidelity of a high school senior’s final project. Luce is a college admissions essay made into a thriller. It’s precious and pandering, just like it should be.

Stephen Silver wrote for Splice Today last week that, “Luce is worth seeing if only for Harrison’s outstanding performance, and the compelling ideas it raises.” Compelling ideas? The discourse here is stuck in the Obama era: white affluent liberal guilt, overachievement absent of ideology, vague dread with no payoff, and a painfully on-the-nose formality and lack of subtlety in expressing its themes, loudly, very loudly, over and over again so every bluehair who wandered in knows just how bad it is to be black in America. Which it obviously is—America must give black Americans reparations. And there must be better movies than this to talk about everything Onah and Lee try to tackle here.

Armond White was similarly afflicted: he called Luce “a genuine oddity” and rightfully singled out Octavia Spencer’s performance, the only thing Luce has going for it. White gets it right here: “Wilson faces her own demoralization, as did many unfulfilled black Americans at the end of Obama’s presidency. ‘America puts you in a box, and it’s tight, and it’s dirty, and you can’t move!’ she laments. With this role and the movie Ma, Octavia Spencer enters an unprecedented phase of black artistic skepticism. Both films verge upon ludicrous, but the talented, likable Spencer does not.” Hers is the only performance that mostly eludes clichés, excepting her final speech to Luce behind her vandalized home and the bathos of her sister’s meltdown in the high school. But that’s aces compared to Watts, Roth, and Harrison Jr. Their characters are ciphers for ideas and positions and lukewarm political discourse that don’t feel relevant or urgent at all.

Luce is tense and keeps you curious until the end, but there’s no catharsis or reveal to divine the secrets this setup had to give. It doesn’t feel informed by the Trump era, and the things that it’s scared about aren’t a priority today. Luce came half a decade too late.