Killer Elite is full of assasin movie cliches, but the biggest is the pretense the film is based on a true story. 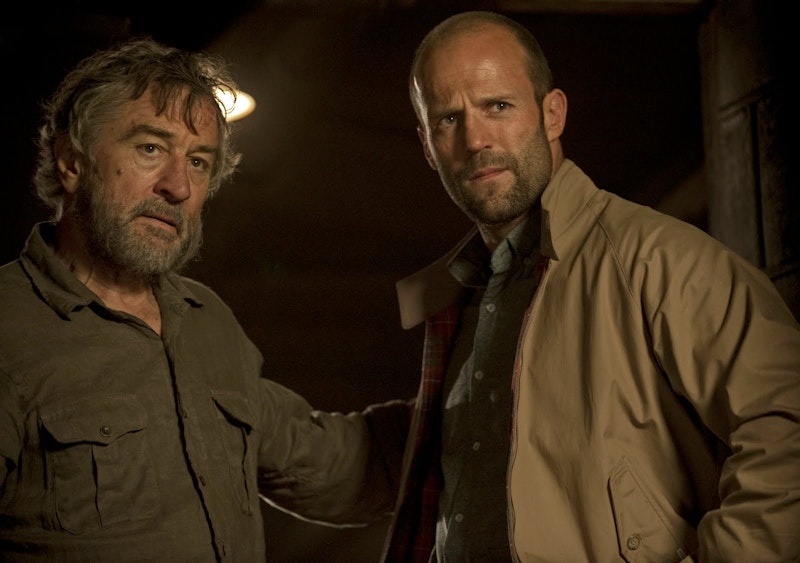 The most interesting part about Killer Elite is not the film's claim that it's derived from factual events, but rather how utterly, obviously preposterous the claim is. The veracity of the book The Feather Men, on which the film is based, is itself disputed. But there can be no dispute about the film. The assassin-tries-to-give-up-the-game-but-is-hauled-back-for-one-last-mission-while-a-new-love-blossoms plot is so hoary at this point that if it ever happened to a real assassin in real life, he'd shoot himself out of sheer mortification.

I doubt the filmmakers really intended to convince us in any serious way. Killer Elite isn't a great movie by any means, but it's not especially stupid either. I'm a little surprised at the critical drubbing it's taken. Obviously, if you went to this expecting great art you'd be disappointed, but only an idiot would go into this expecting great art. I paid my money expecting to see Jason Stratham glower pleasingly from improbably choreographed fight scene to improbably choreographed fight scene, and there was indeed pleasing glowering and improbable choreography. As a bonus, his sensitive killer schtick was surprisingly convincing. When Stratham learns that his associates have offed yet another random innocent, he always manages to look just pissed enough to show you he has a conscience, but not so pissed that you forget he's a hardened killer. After a bystander he's been holding a gun on screams and he fails to shoot her, his look of regret suggests both self-reproach for not pulling the trigger and self-reproach forever thinking about pulling the trigger in the first place. Compared to his restrained performance, Robert DeNiro's oleaginous mugging is nauseating—but, to be fair, I expected that when I went into the theater too. On the plus side, though, DeNiro isn't actually onscreen that much; he only really blights the beginning and end.

So: it's a genre film with a solid lead, and it delivers its genre pleasures in an efficient manner. The filmmakers are not geniuses, but they seem to know what they're about. Why pretend that any of us believe for a moment that this is a true story?

The first answer I came up with is nostalgia. The film takes place (we are told repeatedly) in 1980, during the Cold War. It's an espionage film set in the heyday of espionage; you could see the whole thing as an homage to James Bond or John Le Carre. We're supposed to pretend its "real" to better enjoy the period feel.

The only problem with this explanation is that there isn't a whole lot of period feel. The characters don't have cell phones, admittedly, and there are some truly heinous unlicensed mutton chops, but there isn't any real Mad-Men-esque effort to recreate the ambience of an earlier time. Killer Elite doesn't even take advantage of that Cold War staple, the Russians. Instead, the movie's plot revolves around complicated machinations instigated by British meddling in the Middle East—hardly a scenario that needs to be plucked from three decades ago.

Which may be the point. The movie opens with a tease noting that the events of the film take place in a time of economic recession as well as of  "revolution, assassination and covert operation." In other words, the more things change, the more they don't.  Whether Oman then or Iraq now, the Brits (and the Americans, of course) are still staggering around unscrupulously searching for oil and finding blood.

The movie doesn’t really follow through here either though. Most of the film is set in Britain, not the Middle East, and while there's some vague jowl-shaking about how SAS involvement in Oman was a bad idea, nobody seems to care all that much. In the end, the westernized scion of the sheik wants to enjoy his wealth, not repel the infidel. If espionage fails, capitalism doesn't—which facilitates the requisite ironic twist ending, but doesn’t do much to explain Osama bin Laden.

There's still that question, then: why pretend it's real? So I did what I usually do when I'm stumped and asked my wife. As is usually the case, she had an instant answer. "Assassins!" she said. "Everybody wants to believe in assassins! It's just like they want to believe in ninjas."

It does have the ring of truth. An assassin movie is a little like a ghost story told round a campfire; pretending it's more than a fiction is part of the genre. Killer Elite doesn't have anything on its mind in particular; it's just fulfilling its function.