Brother From Another Planet

Olivier Green, the oddest of the odd ducks on the ninth season of Project Runway, is finally sent packing. 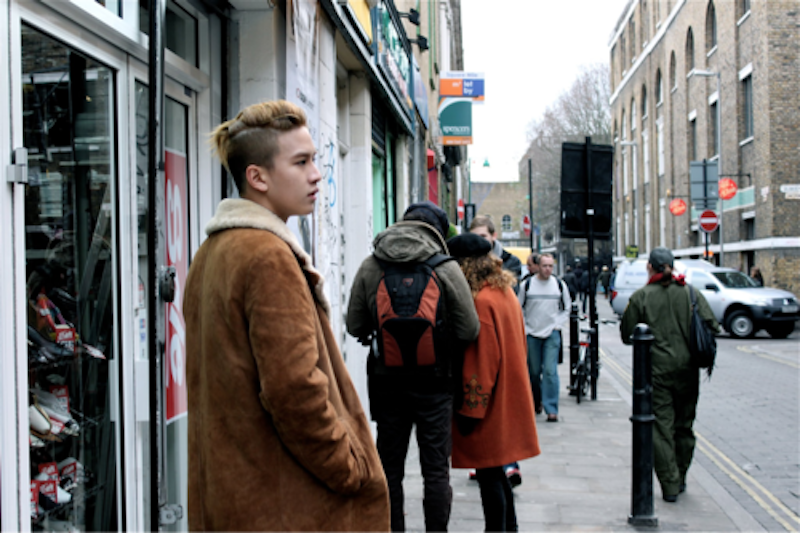 Cat fights. Backstabbing. Virulent ageism. A black, female designer who didn’t get eliminated from jump! The dearth of even one token straight dude. The plan, as I’d originally envisioned it, was to talk about all of the above in terms of the current season of Project Runway, to emphasize how the bickering and the revised, oddly desperate Michael Kors/Nina Garcia-pimping title sequence and the guest judges (who knew fellow reality-show vet Adam Lambert could be so cruel, right?) even the sheer inventiveness of the challenges—the designers cobbling together haute couture from pet store supplies and their own pajamas, dressing stilt walkers, styling hilariously hirsute band The Sheepdogs—is infinitely more intriguing and memorable than most of the actual clothes. Trinidadian drape-dress maven Anya Ayoung-Chee and shriveled bumpkin-punk Anthony Ryan Auld—crap sewing skills aside, she’s got a chance to win the whole shooting match—both sport partially shaved skulls; it’s as much fun to imagine an alternate universe where they mate and produce shaved-skull children as it is to remember Auld’s daring birdseed dress, but neither vision compares to the diva fits of bitch-twitch Joshua McKinley. You know a Project Runway season bites when the only time you can bother to look up from the video game you’re acing on your iPhone is when there’s an intergenerational fracas or when Tim Gunn wanders into the Parsons workroom to strike disapproving poses and generally second-guess everyone’s instincts.

Last week, Olivier Green went home, and this season—such as it is—immediately became, depending on one’s point of view, infinitely more or less watchable. Now, it’s important to remember, for the sake of context, that most Project Runway contestants are self-styled artistes who live in a all-fashion bubble full with copies of Vogue and Vanity Fair and waist-size-zero waifs and a gay/lesbian/transgendered-friendly creative ambiance; in other words, they don’t live in the real world. So when these aesthetes are confronted with regular people with regular tastes and regular body shapes, one can reasonably predict a huge clash of cultures and values.

Olivier Green, 22, is very interesting to me. He’s international, sure, but not in the way that Ayoung-Chee is international; Ayoung-Chee is comprehensibly international, she’s international in a way that makes sense. Green is altogether different; he’s so deeply, deeply weird that it’s as though he’s literally from another planet. His language patterns are upsetting, his gestures and affectations distressingly robotic, to say nothing of his inability to hold his own or even really engage in exchanges of ideas with anyone; it’s embarrassing to those of us who gauge our humanity by those criteria.

His English, meanwhile, isn’t so much ethnically or internationally accented as it is way, way off, like an unconvincing simulacrum of those disjointed call-center programming AIs offer you choices when you call your bank to activate your new ATM card. He was like a sloppy, chromosome-deprived parody, not of a disaffected gay youth, but of a fucking person. Whenever dude was onscreen—babbling neurotically in “confessional” segments, scampering from the workroom to the sewing room and back like a Mega Man mecha-bunny, his gaze flitting around illogically as if his eyes were under the control of some sadistic off-screen puppeteer—seriously, I felt like I was watching a runway take on Spinal Tap or something. In seven or eight seasons of watching this show, I can’t think of any other contestant who was (a) as thoroughly disconnected from reality, (b) less prepared to succeed any aspect of adult life, or (c) who would be as perfect a candidate for a laughtrack-equipped, faux-Truman Show-esque series where a camera crew trailed him everywhere, capturing every awkward and unnatural aspect of his flailing, unconvincing attempt at imitating an actual homo sapien. I’m probably gonna miss Green; I’m definitely gonna worry about him.