Andy Rooney: The Old Man and His Screeds

The 92-year-old commentator is finally retiring, but he's left a lasting mark. 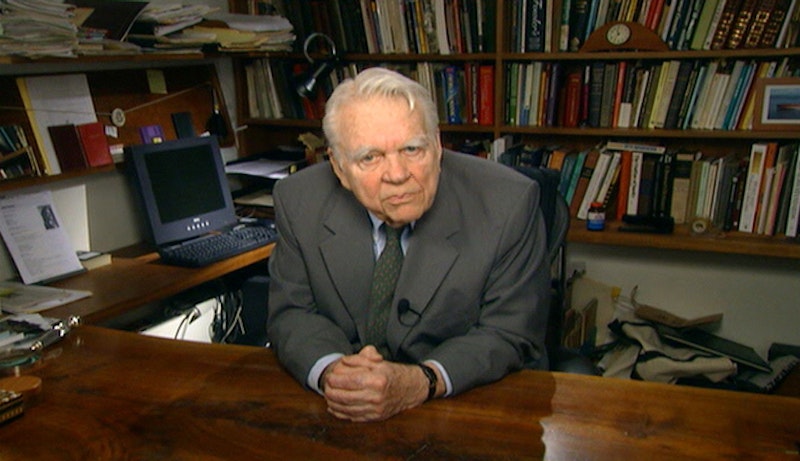 It’s pretty much impossible for me to write a genuine Andy Rooney remembrance, because despite following his commentary from roughly the ages of five to maybe 17—thanks, Dad—I can’t remember a whole lot of anything Andy Rooney actually said. What’s stayed with me over the years is how Andy Rooney said what he said, the rumpled, vaguely resigned way he trawled through Western Civilization ephemera great and small. The 60 Minutes director assigned to him going in for tight close-ups of his be-jowled, blubbery tilted-at-an-angle mug, then periodically pulling back for wide-angle shots that captured gave viewers a peek into his office—the overflowing bookshelves, the untidy desk, the sprawling NYC vistas—and took in the amiable-if-exasperated curmudgeon himself.

Andy Rooney always seemed so tired, and eternally so, as if he’d been done with the larger culture and politics of the world forever but because CBS was fronting the cash and office space and maybe an expense account he’d deign to bless us with quizzical insight and invective—the rhetorically immortal “You know what I don’t understand?” will inevitably pepper his obituaries—about whatever was happening, vis-a-vis the eyes of the larger media, in a given week.

Rooney’s charmed soapbox life seemed to exist at a remove from reality as most of us experience it, a sort of Mister Rogers’ Neighborhood­-for-adults world where the business of “work” consisted of a week of kicking back with the Big Five daily papers and struggling to decide which tweed blazer to wear to the office—then cobbling together some pithy remarks just prior to airtime, then repeating the pattern the next week. And though the 92-year-old commentator’s retirement is just around the corner, his influence is ubiquitous and pervasive in myriad, subtle ways.

Laugh if you like, but if you make a living or wield sway by proffering opinionated cultural commentary—as a blogger, columnist, stand-up comedian, cable-news program host, serial letter-to-the-editor writer—you owe Rooney a debt that you may not even be aware of. Gray Sunday after gray Sunday for more than three decades—and in syndicated newspaper-column recapitulations—Rooney quietly and incisively legitimized the art of lodging cranky, seemingly under-informed arguments based on the sort of populist, common-sense sentiment that potential conservative presidential candidates have twisted into something malignant and poisonous in recent years. Maybe you’ve forgotten Rooney, and maybe you never even knew he was on the air—60 Minutes hasn’t been a ratings juggernaut lately—but his fingerprints are so pervasive that they’re all over your psyche, even if you’re not aware of them.