Into the Void, Part One

This Fall, two new period dramas—Pan Am and The Playboy Club—attempt to pick up where Mad Men delayed: giving the viewing public more of the 60s, particularly the well-dressed, discreetly trysting, rampantly sexist and debonair 60s. Part one of two. 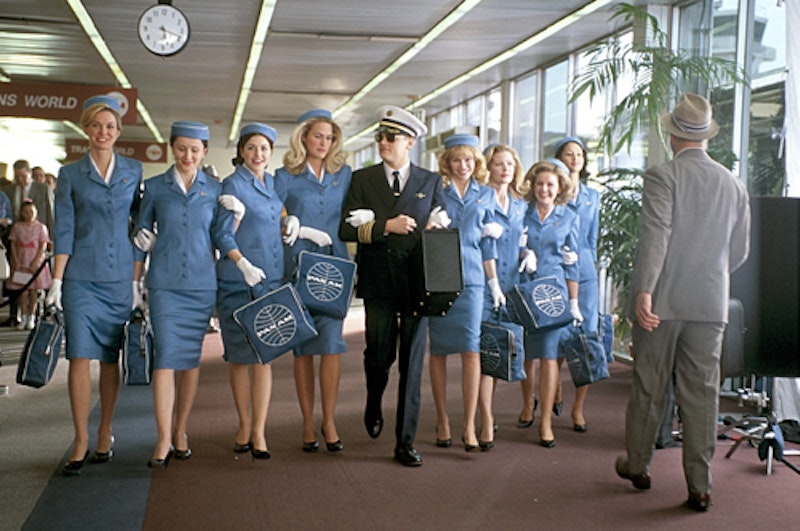 Mad Men fans have a void to fill, what with the show’s fifth season delayed until next year on account of its well-deserved fat price tag. There is hope yet, in the likes of ABC’s Pan Am—a svelte and sexy piece of historical fiction centering on the famous airliner and its famous stewardesses—and The Playboy Club, from NBC about, well, Playboy.

“I don’t need to see the world to change it,” shouts the boyfriend of one of the stewardesses in Pan Am as she rushes out the door to catch a flight while West Wing-style trumpets and clarinets chirp away aimlessly. She begs to differ. It’s New York, it’s 1963, and boy are we going to have fun.

The first 15 minutes of the pilot are filled effortlessly with blue pencil skirts, lacy bras bared in the backseats of cabs, boyish captains, pristine faces and felt gloves. Pan Am: It’s the perfect premise for achieving that Mad Men feel—metric tons of vintage fashion coupled with all the racist/sexist/post-WWII trappings of the 1960s—without doing a whole lot of work. (Thankfully, we’re quickly given some tension to chew on: one of the stewardesses is a government intelligence contact of some sort.)

But lest we think that the magic of flight in the 60s was only based on beautiful women, let’s cue the soppy inspirational overture that takes us through lift off (New York to London nonstop) into the first commercial break. This is about flight; everything is beautiful, everything is going to be okay. You see, six months prior, one of our central characters bailed on her wedding day. She wanted to see the world, so she and her sister stole daddy’s car and enlisted in the Pan Am army. Our French character is in a pickle: her “London man” is on the flight she’s working, and he’s with his wife and son. A flashback gives their relationship its depth—but already, before the show is half over, every central woman in the show is defined vis a vis her relationship with a man. Mad Men certainly embraces the lurid sexism and sexuality of the time period, but, especially in the early scenes, made a real effort to give its characters, both female and male, some real dimension.

It feels like these Pan Am airplanes are vessels of sex: so, obviously a winning formula for television. And the only thing that could hang tough with American’s love of sex and marginalized women is this country’s love-hate relationship with communists. The Bay of Pigs is the setting for yet another flashback—look at those crazy kids, evacuating dissidents and flirting and proposing to each other. “It’ll make a great story!” pleads the male side of the proposal at the foot of the airplane gangway, propellers blazing and trumpets swelling.

It’s all a little silly, but saved somewhat by the ease of which Pan Am bookends itself. It’s a good story that doesn’t serve history particularly well, especially the line “Make no mistake: they call it the ‘Cold War’ for a reason,” delivered by a British spy to our insider stewardess. This promises limitless James Bond-lite fodder throughout the season.

It remains to be seen just how seriously Pan Am takes itself. The pilot is content riding on the same familiar visuals and elementary narratives we saw in Mad Men, but, so far, without a substance that goes beyond worn-down narrative tracks. “That is natural selection at work my friend,” one of our boy-faced pilots says as he consoles his love-stricken fellow pilot, gesturing toward a table where all our stewardesses sit and laugh. “They don’t know that they’re a new breed of woman. They just had a natural impulse to take flight.”

Who knows how tongue in cheek this kind of statement really is, and if Pan Am will be nothing more than big band soundtracks and shots of rainy London nights. The opening episode closes with the stewardesses walking, in perfect formation, toward an expectant plane. Crisp automation—I hope the show will go further than that.