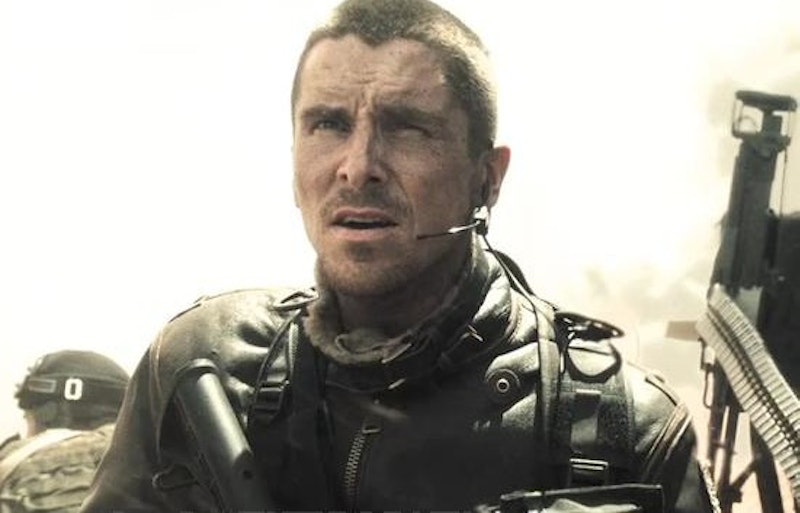 There are many reasons why Terminator Salvation is a terrible movie, but the central one, the deep-seated problem I couldn’t let go of as the godawful script lurched robotically along, is a fatal thematic flaw: writers John Brancato and Michael Ferris seem to think that their dead-on-the-page script is about “the strength of the human heart” over the bloodlessness of machines, but director McG and his leaden cast have drained any ounce of possible humanity from the Terminator story and replaced it with CGI. Sure, no one wants the human race to be enslaved by our self-created robot overlords, but it’s also hard to argue against that when “The Resistance” is itself this wooden.

As a result of the Terminator franchise’s incoherent time-travel plot lines, Terminator Salvation is both a temporal prequel and sequel to the original 1984 film. Christian Bale plays John Connor, who tries to save his father, currently a teenager, from machine enslavement. But we already know that things turn out okay for dad, Kyle Reese (Anton Yelchin), don’t we, since if they didn’t then there wouldn’t be a John Connor in the first place? No matter; James Cameron’s Terminator movies didn’t make much scientific sense either, but they were made by a superb special effects craftsman who knew how to tell a story. Terminator Salvation, for comparison, is directed by McG, who tries like hell to inject some form of human emotion or drama into the story through the heroic inmate-cum-cyborg Marcus Wright’s (Sam Worthington) internal struggle, but who apparently forgot that he sold his soul upon agreeing to direct this hot mess. By signing up to helm an early summer sequel/remake action bonanza, McG agreed to do the bidding of industry nimrods and audience-testers—that means more explosions, more faceless CGI-only action sequences, more everything.

The Terminator came out in 1984 and was made for just over $6 million. It was a B-movie with a relatively high budget, and its success meant that studios started looking to schlock culture for its potential windfalls; that’s why we’re now inundated with insanely high-budget comic book movies every summer. It’s a trend that arguably started with Ridley Scott’s Alien and Blade Runner, and was continued with Cameron’s Aliens and Terminator 2: Judgment Day. Like the Alien films, The Terminator and its sequels are monster movies disguised as sci-fi, and to my mind all these movies exemplify good schlock. All are made unpretentiously, with an eye towards entertainment in all its dimensions; and perhaps most interestingly, the Alien and Terminator franchises, despite Arnold’s marquee presence, are boldly pro-female. Cameron and Ridley Scott stage excellent action sequences, relish their amazing (and technically innovative) art direction, and give their movies a little genuine humanity through depictions of female characters’ growth from passivity to heroism. Scott has devolved into one of our era’s greatest cinematic hacks, and Cameron bit off more drama than he could chew with Titanic, but these early films are well-made, interestingly conceived pop products.

There’s no strong female presence to speak of in Terminator Salvation, unless you count John Connor’s barefoot and pregnant wife (Bryce Dallas Howard), a buxom Resistance fighter (Moon Bloodgood) with an improbably supportive bra in these post-apocalyptic times, or the mute ethnic orphan (Jadagrace) taken under Kyle Reese’s wing. Helena Bonham Carter is present for the first scene as a cancer-suffering representative of an evil corporation, but then her character is literally replaced with a machine.

Their male counterparts do nothing to pick up the slack. Bale’s in high joyless mode, which means a lot of pinched-cheek glaring and a slight variation on the Batman growl. Worthington does his best with a shallow character that’s saddled with more Christ poses than he deserves. As Kyle Reese, Anton Yelchin never varies his tone or facial expression; same for cartoonish Resistance officers Michael Ironside and Ivan G’Vera. And my god, the rapper Common gives some of the most lifeless line readings I hope to hear this year, making 50 Cent’s turn in Righteous Kill seem like Ian McKellen in comparison.

These characters all grunt and grimace their way through the requisite mayhem—chases, crashes, fist fights, gunplay, completely obvious dramatic twists—and scientifically dubious art direction. (Why, for instance, if the nuclear holocaust happened in 2004, does everybody stay connected to the Resistance headquarters through pre-1995 desktop radios? And why, if the Resistance is scientifically evolved enough to create a machine-killing sound wave, do they still transport it using USB zip drives?) A few old lines from the original film, “Come with me if you want to live” and “I’ll be back,” reappear (as does Ahnold, in a cameo), which heightens the suspicion that this movie is less sequel than cash-in. And there are deathbed tears from all the supposedly human characters as a climactic organ transplant is decided upon, complete with syrupy music and fade-to-white. McG apparently thinks that the way to make action movies more soulful is to drown the calm scenes in schmaltz.

But it takes no great mind to realize that the humans in Terminator Salvation aren’t the point, except as props in McG’s drab set design, video game action sequences, and trendy Bourne/Children of Men handheld cinematography. At one point, Blair Williams (Bloodgood) cozies up to Wright in the fiery desert night, looking for “body heat.” “You have a strong heart,” she tells him, and I guess we’re meant to just take her word for it.