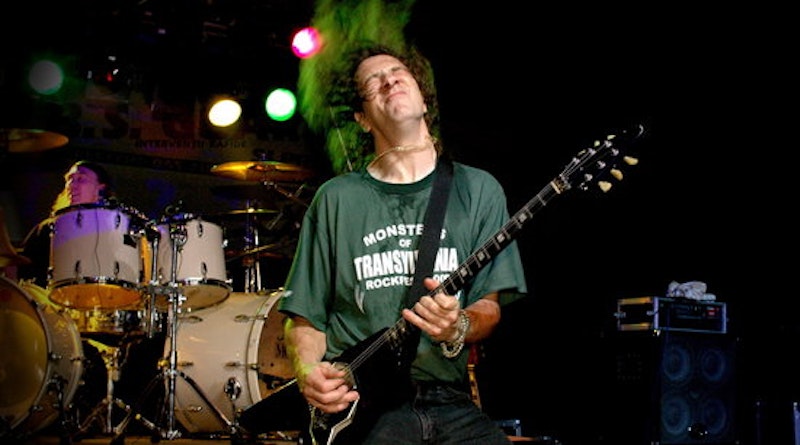 We never get to hear more than 30 seconds or so of Anvil’s music at a time in Anvil! The Story of Anvil!, which is a paradoxically beautiful move on director Sacha Gervasi’s part. This is not a movie for metalheads, though they’ll likely enjoy it a great deal. Rather, Gervasi’s incredible film is the story of two men, their undying love for the music that moves them, and the equally resilient love they have for each other as a result. More universal themes can scarcely be imagined, which means the specific choruses and riffs of Anvil’s oeuvre are nearly incidental. In a movie culture overflowing with bromance, Anvil! The Story of Anvil! crushes all.

The Spinal Tap comparisons make themselves—including the unbelievable coincidence that frontman Lips Kudlow’s creative partner and drummer is named Robb Reiner—but that says more about the older film’s spot-on parody than anything else. The clownishly crude lyrics, rotating band members, and triumphant late-career success in Japan—all are present in both films, but they’re used to such different ends that you stop looking for comparisons. This is Spinal Tap parodied rock and roll excess, whereas Anvil! celebrates the genre’s earthier qualities: its capacity for uniting outcasts, engendering friendships, and, in Lips Kudlow’s words, giving its fans “the joy and pleasure that you need to get through life.”

For a short time between 1982 and 1984, Anvil toured with the likes of Bon Jovi and the Scorpions, inspired members of Metallica and Anthrax, and recorded at least one seminal LP, 1982’s Metal on Metal. But the big break never came, and the band got left behind as the genre infiltrated the Top 40. Less committed rockers might cut their losses after a few years under such circumstances; instead, by the time Gervasi catches up with Lips and Reiner in 2006, the band is still touring their native Ontario on the weekends and looking for their chance at superstardom. Both remain long-haired and leather-clad, and both perform in small bars as if the crowd were ten times as large. They’re family men, too, with wives and siblings as supportive as could be imagined under the circumstances; when, months after Lips’ 50th birthday, the band learns they’ll need 12 or 13 thousand British pounds to hire Metal on Metal producer (and subsequent industry legend) Chris “CT” Tsangarides to produce their 13th full-length, Lips’ older sister pays for it all. And when recording finishes, Lips spends two weeks in L.A. hand delivering the CD-Rs to Capitol Records, EMI, and more, like it never stopped being 1983.

Such wide-eyed enthusiasm may seem deranged, and to a degree it is, but Gervasi takes pains to present Lips and Reiner’s ongoing dream as reflective of their personalities. There’s no parody in sight, though I laughed constantly. (Who wouldn’t, for instance, at the sight of Reiner’s prized work as a hobbyist painter: a textured poop floating in a toilet bowl. He claims, “a guy named Edward Hopper” as his main influence.) But Anvil! is also startling and emotionally rich in the way that only documentaries can be; the seriousness in Reiner’s face as he describes his work isn’t mere aloofness, it’s the face of a man whose main communicative outlet is his creativity. Gervasi allows us to laugh at the particulars of Anvil’s tastes while relating to the greater themes of their story.

Anvil! starts with footage of the band on tour in 1984, along with testimonials from Lars Ulrich, Scott Ian, and Lemmy Kilmister, who all also seem dumbstruck as to why Anvil never made it big. Gervasi perhaps skirts around this issue throughout the rest of the film, although a pattern does emerge: Lips and Reiner may have an abundance of talent and enthusiasm, but, as their courting of Big Five record labels reveals, they have no business acumen or pop cultural wherewithal to speak of. Their current guitarist’s girlfriend, a well-meaning European woman named Tiziana Arrigoni, offers to set them up a tour of the continent’s best festivals and clubs; what ensues is a morale-destroying series of missed trains, unpaid bar gigs, and under-attended outdoor concerts. And yet when he returns home, to his day job as a driver for a catering service, Lips looks right at the camera and professes gratitude for Tiziana’s effort.

The movie gains considerable humor and insight from the fact that, despite his lyrics about Satanism and group sex, Lips remains as sensitive and boyish as he must have been when he started playing with Reiner at age 14. His lip periodically quivers in exasperation and sadness, but he always gets back on stage to shred his guitar to hell and scowl at the audience. In this way, Anvil! is of a piece with the tremendous 2004 documentary Metallica: Some Kind of Monster, where even the world’s most successful heavy band is shown to be hyper-sensitive and emotionally vulnerable. That Anvil and Metallica both grapple with similar crises of conscience throughout their respective films, eventually learning to appreciate the friendships underlying the music they play, speaks to the universality of culture worship. These men don’t continue playing in order to conquer the world, even though that’s the expressed goal of each; they continue playing because the relationships with their bandmates give meaning to their lives.

Metal, in part thanks to This is Spinal Tap, seems unbelievably easy to parody, but Anvil! reminds us how self-aware and theatrical most of the genre’s excesses are. More than even punk, it allows for a willing and half-serious suspension of teenage immaturity, which explains why the audience remains almost entirely male, particularly for Anvil’s speed-and-death style. This makes it ripe territory for intense, longstanding male friendships, which is really what animates Gervasi’s film. Neither Lips nor Reiner are particularly outgoing; they’ve long ago given up attempting to live by traditional social benchmarks.

Rather than present this choice as heroic, Gervasi wisely shows how pop culture can give these kinds of people a sense of community and belonging. Anvil’s members would probably say that heavy metal gave them something to live for, but I ended the film feeling like these two guys would feel equally set-apart from society whether they played music or not. Instead, a fierce love of this defiantly juvenile genre gave them each a friendship that makes such a life tolerable, even wonderful. It might be a counterintuitive message from a band with song titles like “Jackhammer,” “Winged Assassins,” and “Bondage,” but it makes for a hell of a movie.