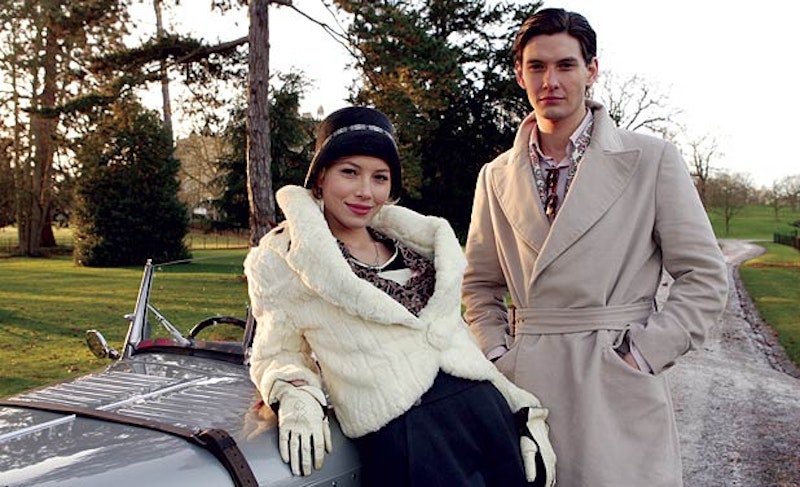 Stephan Elliott’s Easy Virtue, based on the play by Noël Coward, is the kind of movie that tries so hard to be fun that it’s nearly exhausting to watch. Some films are theatrical in the sense that they come off like filmed plays; Easy Virtue, though it’s not quite a musical, nevertheless feels like musical theater, and when as the camera swoops, computer-enhanced period art direction, and relentless score increase the actors’ already stage-ready performances, the result is very nearly total overkill. But Elliott’s film, like his similarly campy drag queen movie The Adventures of Priscilla, Queen of the Desert, has enough heart and charm to save it from death-by-kitsch. Think of him as the tolerable, talented Baz Luhrmann.

In the uneven, frequently annoying tradition of Chicago, Tucker: The Man and His Dream, and The Aviator, Easy Virtue is stuffed with bombastically recreated jazz-age pop and pizzazz; to watch these movies is to watch filmmakers trying to resuscitate a bygone era’s quaint allure through brute cinematic strength, like a bodybuilder trying to make a martini by stirring furiously. After a quick, digitally-created art deco title sequence, we meet Larita (Jessica Biel, who also sings surprisingly well), a champion American female racecar driver who, after a whirlwind romance with young Englishman John Whittaker (Ben Barnes), marries the young chap and the two go back to his family’s English manor house to meet the family.

Trouble is afoot for the Whittaker clan, however, in that parents Jim and Veronica (Colin Firth and Kristin Scott Thomas) have an uneasy, loveless marriage, their daughters Hilda and Marion (Kimberly Nixon and Katherine Parkinson) are too homely and reserved to attract husbands, and their estate is nearly bankrupt. The family expected young John to return from France and marry the neighboring family’s daughter, thus saving them from financial ruin; when he comes back with an ostensibly “loose” American woman (and a widow, to boot) and they announce their intentions to live outside of England, the female family members’ mistrust of Larita soon turns to outright contempt. But patriarch Jim, still psychologically wounded by his experience in World War I and given to touching, if broad, expository monologues on the topic, sees the worldly American as a kindred spirit and the two bond over life’s hardships and a shared hatred of Whittaker pettiness.

I would typically mean it as an insult to say that Colin Firth is the best thing about a movie; in his stiff-upper-lip Darcy mode, he strikes me as one of the least interesting actors alive. But here he’s looser, and he’s allowed to be the funniest person in a scene rather than the dowdy straight man. Biel clearly tries hard, and she nearly pulls off her character’s difficult mixture of drama and broad comedy, but you can almost see the gears turning as she goes through the movie, particularly in her scenes with the more natural Kristin Scott Thomas.

Little else feels natural about Easy Virtue, however, which distracts from the script’s occasional and appropriately English-seeming light touches. The manor setting and a second-act fox hunt echo Renoir’s The Rules of the Game, but where that film’s antic tone comes from the actors’ overlapping energies, Elliott’s performers seem imprisoned in Easy Virtue’s flashy editing and flapper-era swing. The bustling jazz score flits from standards like “Let’s Misbehave” to Cole Porter-ized versions of “Sex Bomb” and “Car Wash,” which gave me horrifying flashbacks to Moulin Rouge! And while the film was produced by historic Ealing Studios, it has none of the bone-dry, dark wit of The Ladykillers or Kind Hearts and Coronets.

It’s unfair to use these acknowledged classics as a measuring stick, however, and the greatest criticism of Easy Virtue I can honestly register is that it’s often quite annoying. The winking, broad humor just wore me down after a time, as did the film’s odd use of music; characters break into song periodically, and certain scenes are set ostentatiously to popular tunes, but things never get rowdy or campy enough to qualify as a musical. I wish Elliott had allowed his film to get a little more out of control, since as it stands, Easy Virtue feels too worked-over for the fairly tame results. There’s plenty of fun to be had, plenty of semi-barbed Britain vs. America banter, and even a surprisingly tolerable Firth, but it all feels like it’s happening under glass. What happened to the promised misbehavior?