Not Your Tween's High School Musical

If the creators keep things strange, Glee could be a great show. (Grade: B+) 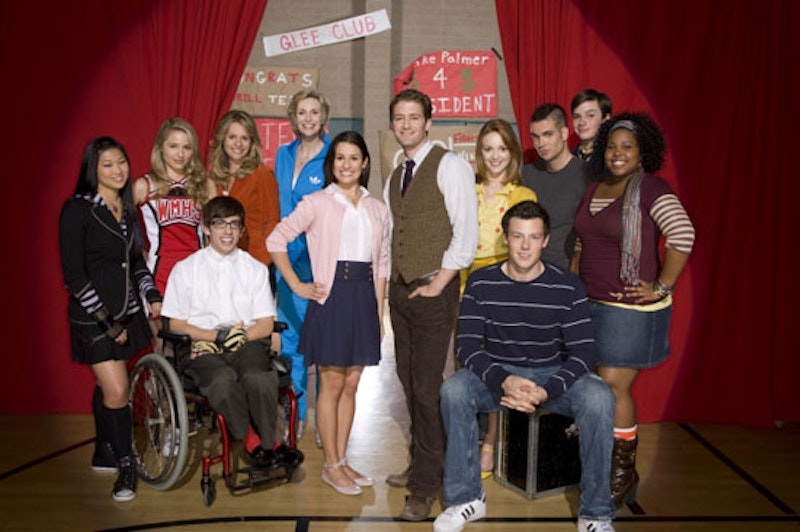 Twitter was all abuzz Tuesday night after Adam Lambert proved Kris Allen is about as interesting as a country biscuit. After Allen put America to sleep, we awoke to Fox’s latest bit of derivative television: Glee.

Glee follows the struggles of a group of teenage losers and their idealistic teacher as they try to revive a middle class high school’s show choir. It’s a good show, with the potential to be a great one if Fox and its creator Ryan Murphy go even farther, instead of doing what most shows do: devolve into mediocrity.

Regardless, you will see Glee this fall. Depending on if you’re an optimist or pessimist, Glee either missed or met expectations on its premiere after Idol on Tuesday. Either way, Fox has dropped many millions betting on this show, so they have to push forward. You should give it a try.

Glee is a return to form for Fox, which made its mark in the 1980s by challenging the original networks ABC, NBC and CBS with edgier and engaging programming. Marketed as High School Musical: The Series, Glee is actually much closer to Fox classics like Married with Children, The Simpsons, Family Guy and Malcolm in the Middle. It’s a distant cousin, but it’s definitely a relative.

If you tuned in expecting High School Musical, you instead received Camp, the 2003 movie about a musical theater camp where everyone is either gay or questioning, the grown-ups are either drunks or incompetent and every kid’s a loser; “we're all losers," the football jock concedes in the premiere. It’s not surprise that Glee creator Murphy made his name with Nip/Tuck and the film Running With Scissors. A fucked-up America is his thing.

Glee’s America isn’t so much fucked up as real, however. Geared toward tweens and younger adults, the show portrays a more realistic view of suburban, or exburban, life. But it’s behind on this trend. ABC Family is ahead of them with Greek and Secret Life of the American Teenager, both with plenty of gay subplots and misbehaving youngsters. If you watch those shows, the fact that Glee’s star gal Rachel has two gay parents, one black, one white, isn’t too shocking.

Still, Glee has punch. Characters include a molesting music teacher who becomes a drug dealer (marijuana), the obligatory lesbian coach (played by power-lesbian Jane Lynch), and an OCD counselor who’s in love with the glee club’s hot supervisor, our protagonist. The word “penis” is used, as is “Gaylord Weiner.” The football jock is dating the president of the Celibacy Club. The cast is multicultural, though the show boringly casts them as side characters. Some things never change, but at least the show is self-aware: our sassy black female stereotype says to football jock, “what are you bringing to the table, Justin Timberlake?”

There’s the rub. I hate Justin Timberlake, but most of America loves him. So our leads are in fact the high school jock and the pretty, if unpopular, girl. There is an air of predictability hovering over Glee even as it tries to break the mold. All the formulas are still in place: sports guys are mean, teachers are weird, handicapped and overweight kids are uncool. The true test of the show will be whether it can poke enough fun at itself, while still delivering earnest and heart-pounding musical numbers—the show ended predictably with Journey’s “Don’t Stop Believin.’” If it remains aware of its own ridiculousness, only then will it hold my interest. For now, it at least has my attention, which is more than most shows can say these days.