If something were to go wrong, let’s say the house caught fire or there was an earthquake, there was nothing he could do to help himself. 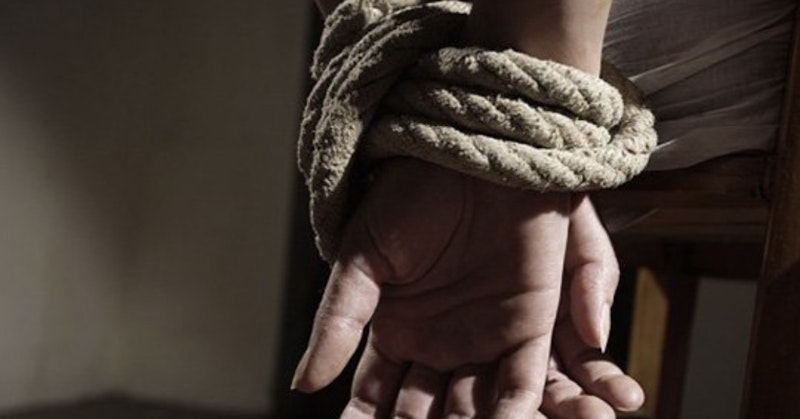 Gary’s a successful Hollywood screenwriter with multiple film credits (his real name is changed). Early in his career, he was hired to write a script for an action movie that called for a crucial kidnapping scene. As part of his research, he read the book Six Days in August that introduced the term Stockholm Syndrome. He finished a first draft and submitted it to the studio for review. The feedback was harsh. The main complaint was that “the kidnapping scene wasn’t real enough.”

His contract allowed one rewrite. He asked other screenwriters for advice. A friend told him about an Israeli ex-Mossad agent named Svi who offered his services as a Hollywood story consultant. Gary gave Svi a call. Svi’s process was unorthodox. There would be no screenplay critique. Instead, Svi promised to kidnap the client at some unforeseen time and place within 30 days. He’d utilize techniques he’d learned in Mossad including sensory deprivation and “a facsimile of psychological torture.” This last point wasn’t elaborated upon.

Gary paid the $2000 fee and enlisted Svi’s services. He signed a multi-page contract protecting Svi from a lawsuit. The contract specified Gary wouldn’t be physically injured though he may experience “residual emotional stress or trauma.” This was exactly what Gary wanted. It’s what he needed to complete his script.

Gary didn’t tell his wife or parents. The only person who knew anything was the screenwriter who’d introduced him to Svi. For the first few days, Gary was anxious. Every loud sound or tire screech made him jump. After two weeks, nothing happened. Gary went on with his life, almost forgetting about the agreement. One day, as he exited a Big 5 Sporting Goods store in Studio City, two men put a hood over his head and forced him into the trunk of a black Mercedes. The trunk slammed shut and the car sped away.

Gary took a deep breath and decided to go along with the journey. He removed the hood and felt around the confined space. Everything was dark. He heard other cars passing on both sides. The Mercedes stopped and idled. Gary felt around for a latch to unlock the trunk. The car jerked forward. Suddenly everything was loud and chaotic. Gary could tell they were on a freeway. The car increased speed and weaved, knocking Gary around.

Soon, the Mercedes got off the freeway and made a left turn. The car ascended a steep curvy hill. With each turn, Gary was knocked back and forth. The car slowed and drove up what felt like a steep driveway. He heard a garage door open and the car pulled inside. The garage door closed and the men exited the vehicle. The trunk opened and the men roughly pulled Gary to his feet. They tied another hood over his head and fastened his wrists behind him with handcuffs.

They marched Gary into a house. Though not scared, Gary’s senses were heightened. The floor was hard like marble. He heard the purr of an air-conditioning system and felt cool air hitting his skin. He was brought into a room and sat down on a hard wooden chair. He heard the coarse sound of gaffer tape torn from a roll and then felt the men tying his legs and abdomen to the chair.

Gary wanted to say something to remind himself this was all a charade and he wasn’t in danger. “You guys are good,” he said. “This feels real.”

The men remained silent. They left the room and left Gary alone. He squirmed to free himself but the tape was too tight. His wrists started to swell and his skin was chafing. That’s when panic set in. He knew this was all a charade but still felt vulnerable and powerless. If something were to go wrong, let’s say the house caught fire or there was an earthquake, there was nothing he could do to help himself.

He took deep breaths and visualized himself on a serene beach. He thought of his wife. He knew she’d be upset when he told her about the experience. This filled him with sadness. And shame. He suddenly felt like a fraud. A real writer would imagine what a kidnapping felt like. Instead, he chose to pay “for the privilege” of being kidnapped. How pathetic.

Hours passed and nothing happened. Then the door opened. The two men lifted the chair and hauled him to another room. They put the chair on tile and he heard the sound of a bath faucet turning on and water filling a tub behind him. This went on for 10 minutes until the tub was filled.

The men clasped his shoulders and tipped him backwards until his head touched the freezing water. Gary flinched. The men tilted him back further, plunging his entire head beneath the water. Water went up his nose. It was as if a knife had been thrust into his sinus. He thrashed his head back and forth. He swallowed water. The men returned the chair to its normal position. Gary coughed and spit mucous from his nostrils. They tilted him back again.

Gary held his breath this time. After a half-minute, he sucked in a horde of water. The men lifted his head from the tub. He clamored for air. The men lifted the chair again and carried it into another room. They removed his hood. The room was pitch dark. One of the men tied a dark cloth over his eyes and covered it with gaffer tape. He placed headphones over Gary’s ears. Gary heard raging heavy metal music at high volume, and sensed the men leave the room and close the door. For the next hour he was subjected to incessant death metal with growling, unintelligible screams as if someone were dying.

The music was horrifying. Gary felt trapped. He writhed in his chair, rocking back and forth until it tilted and fell to the floor. The handcuffs dug into his wrist causing horrible pain. He screamed, “Help, someone help me.” The door opened and the men righted the chair. They removed the headphones.

“I think I broke my wrist,” Gary yelled.

One of the men removed the handcuffs. Gary rubbed his right wrist until the pain lessened. The men fastened his hands together with tape.

The men left the room and left Gary alone. He tried to undo the tape. It was too strong. Fifteen minutes later, the men returned. Gary heard the sound of tape cut away with scissors. He still had cloth over his eyes and his were fastened together.

The men marched Gary out of the room, into a long hallway and across a marble floor. A door opened. He realized he was back in the garage. The car doors opened and he was placed in the back seat. One of the men sat beside him. Soon they were back on the road.

Twenty minutes later, the car came to a stop. The back door opened and the men removed Gary’s mask and the tape around his wrists. They ushered him out of the car and leaned him against a wall. He was afraid to open his eyes. He heard the men get back in the car and screech away.

Gary opened his eyes and squinted at the bright sun. He saw he was back in the Big 5 parking lot. He was numb. He felt for his car keys in his pocket. They were still there. He looked around and saw his car was parked where he’d left it. He got into his car. His entire body was sore. His hair was still damp from the bathwater.

His car clock read 4:15. He saw a young boy riding a bike down the sidewalk. He put his head in his hands and burst into tears. He drove home. His wife was in the backyard tending their garden. The moment she saw him she knew something was wrong. He told her everything. She was furious. He apologized. She remained angry for several days. He felt a range of emotions from fear to sorrow to guilt.

A week later, he resumed his script rewrite. The words poured out of him. He turned in the new draft and waited for feedback. The producers were effusive. The studio gave glowing coverage. Two months later, the project was green-lit. The movie came out in 2006. It was a modest success with lukewarm critical acceptance. No one complained that the kidnapping scene wasn’t real enough.