Terrifier 2, another word of mouth horror hit, never tries to be anything like "elevated horror." 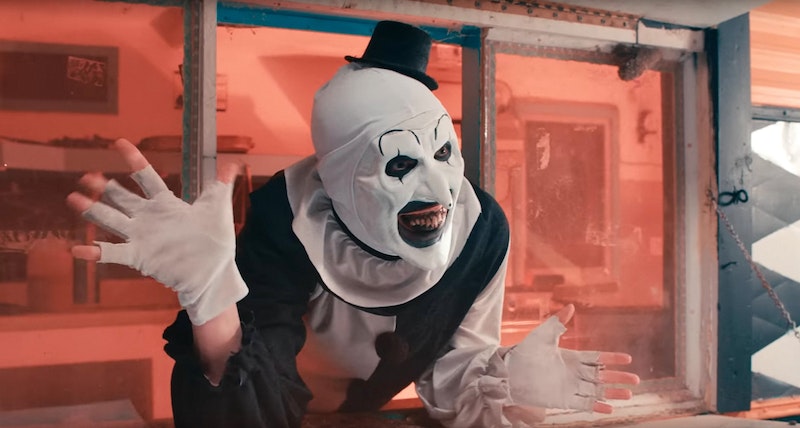 The big story at the movies, following the pandemic reopening, is that the horror has box office durability like few other genres outside the realm of superheroes and Top Gun. Audiences enjoy the communal experience of watching a scary movie. It's helped that a lot of it, especially Barbarian, has been really good. The latest post-pandemic horror phenomenon this fall is Terrifier 2, which landed in theaters in October and slowly expanded throughout the month. It comes from Bloody Disgusting—which is more a news website than a film distributor —has no stars, and is the sequel to the original Terrifier, which didn't make much of a splash six years ago.

Terrifier 2 is a word-of-mouth hit, probably because it goes more over the top with the blood, guts, and gore than even the grossest that we've seen from the horror genre. It’s notable already for surprisingly large box office receipts, as well as reports of attendees vomiting, fainting, or running from the theater. Terrifier 2 makes Hellraiser look like Mary Poppins. That type of extreme gore isn't normally my favorite, especially at a running time of 138 minutes. But the film delivers. Its plot elements are derivative, but it gets creative with the way it stages the violence.

Terrifier 2 was written and directed by Damien Leone, who utilized Indiegogo to secure a larger budget than what was available for the first film in the series. It tells of the further adventures of Art the Clown, a character with a long history in Leone's work. Art (played by David Howard Thornton) is a killer clown/mime with zombie qualities, who terrorizes a small town, as a synthesized 1980s-style score plays. Art the Clown is up against archetypical final girl Sienna (Lauren LaVera), as well as her brother Jonathan (Elliott Fullam). Jonathan says he wants to dress as Art for Halloween, to which his sister objects, because "nobody dresses as Jeffrey Dahmer" (if she only knew…). Their recently-deceased father had some history with the clown, giving Art a goal of killing them—but not before laying waste to the town with increasingly creative measures of stabbing, shooting, dismemberment, and face-eating.

David Howard Thornton gives a skilled physical performance as the clown, but the film belongs to Lauren LaVera, who looks like a star. LaVera, who recently co-starred in the very different indie film Not For Nothing, probably goes through more physical punishment than any horror leading lady since Samara Weaving in Ready or Not.

Most of the ideas here aren't new. The film borrows major elements from the Halloween films (it's set on Halloween, with an iconic and unkillable villain who doesn't speak), Nightmare on Elm Street (the villain appears to have the ability to manipulate dreams), and IT (he's a clown, with Pennywise-like manipulative powers), as well as more obscure horror influences.

There's a concept that’s emerged in recent years called "elevated horror," which has driven a lot of horror fans crazy with the idea that the things they've always watched aren't elevated. But there's nothing elevated at all about Terrifier 2. There doesn't appear to be any political allegory or larger statement about the way we live today. It's just a creepy clown, who kills people in ways more disgusting than you can possibly imagine.