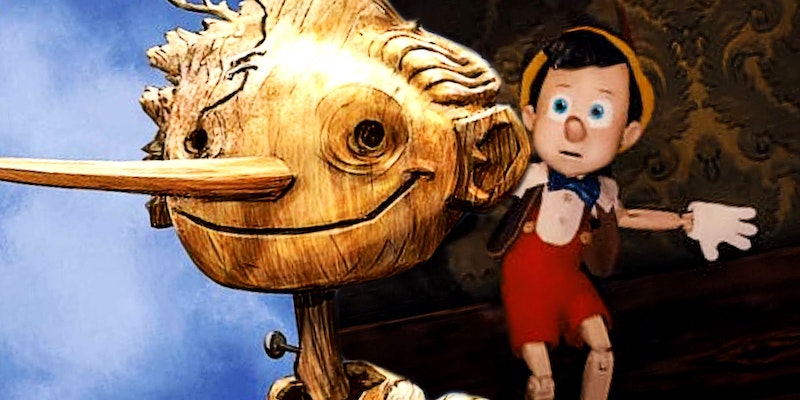 Guillermo del Toro has a new take on Pinocchio that's creative, emotional, and stunning. A stop-motion animated film that applies a macabre style that fits in well with del Toro's established style, the director has made what's officially titled Guillermo del Toro's Pinocchio the best animated film of the year, and one of its best musicals. The film lands in theaters this Friday, and on Netflix in December.

The Pinocchio story always had some dark elements, but this version takes things much further. In the del Toro version, Geppetto (voiced by David Bradley) actually had a son who died during World War I, and built Pinocchio to cope with his grief. The main story takes place during World War II, with fascists ruling Italy, as Pinocchio, soon after his creation, is pulled both towards exploitative circus performing, and to a career as a soldier in the fascist army.

This film is Antifa. The villains are members of the Fascist Party, and Mussolini appears—voiced by Tom Kenny (best known as the voice of SpongeBob SquarePants). It's my favorite deployment of Il Duce in a movie since Woody Allen's Crimes and Misdemeanors, in 1997. The story's origins are Italian, although the novel was published the century before this version's events. Like all Pinocchio adaptations, it's a father/son story, although this one is much more concerned with questions of mortality. A plot development involving Pinocchio getting more chances at life, at first concerned me, since such things are usually a plot copout. But the film manages to deliver a satisfying emotional climax.

Ewan McGregor narrates and also voices Sebastian J. Cricket (he's only called "Jimmy" in the Disney version), while the voice cast is a mix of Wes Anderson and Coen Brothers regulars: Christoph Waltz, Tilda Swinton, Cate Blanchett, Tim Blake Nelson and John Turturro. As for the original songs, they're not Sondheim-quality, but they work in the context of the film. There's one tune that we realize is catchy, before remembering that it's a fascist anthem, in a dynamic that recalls the "Tomorrow Belongs to Me" number from Cabaret.

Will this appeal to kids? Perhaps, although I can see purists who love the 1940 version recoiling in horror. But del Toro is a genius at packaging this sort of stuff; after all, he made a movie about a woman who has a love affair with a fish monster that not only won the Best Picture Oscar, but emerged as that most mainstream and accessible film of that year's awards season. (At a talk a few months later, I asked John Waters what he thought of The Shape of Water, a movie set in Baltimore, winning the Oscar. He replied, “Everyone I know in Baltimore, at least one time, has fucked a monster.”)

A longtime project that del Toro has tried to get off the ground for the bulk of his career, the film arrives following many other takes on Pinocchio, which began life as a 19th-century Italian novel. The definitive take is Disney's classic 1940 animated version. But there were dozens of other versions made over the course of more than a century, from all over the world. There was a 2000 version called Geppetto, also a musical, which starred Drew Carey in the title role, as well as two different versions, for some reason, with Roberto Benigni, one where he played Pinocchio and the other Geppetto. There was a live action version for Disney+ earlier this year, directed by Robert Zemeckis and starring Tom Hanks, but that wasn't much liked by anyone.