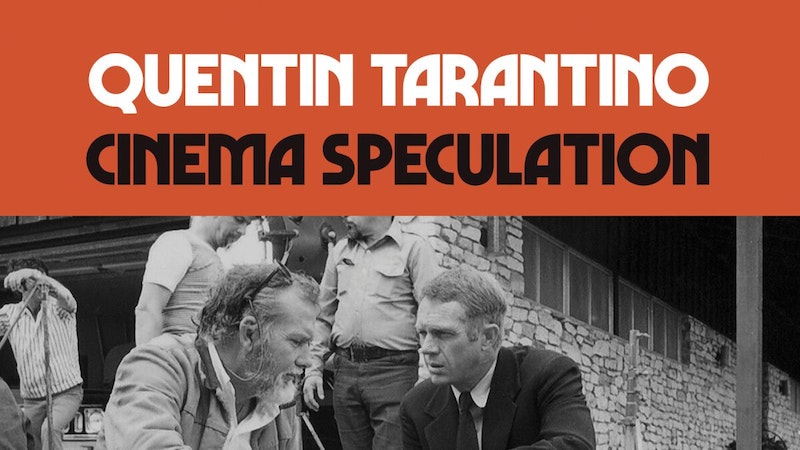 Next year, Quentin Tarantino will turn 60. He’s still 58 for another six weeks, but with a new book out to promote, there’s no way he’ll start shooting his 10th and final film before next December. Cinema Speculation, his first book of nonfiction, isn’t that dissimilar from his novelization of his own Once Upon a Time in Hollywood: although nominally about a number of 1970s movies, Cinema Speculation is as much memoir and Los Angeles/film industry history, just as Once Upon a Time’s loose narrative was supported by a grand tapestry of meta-textual folds that he managed to convey, albeit differently, in the book, as well.

On the page, Tarantino’s penchant and talent for audience misdirection is even more obvious, like when he brushed off the film ending of Once Upon a Time not even 100 pages in so that he could end on a deleted scene that everyone loved but had no place in the film’s structure. Cinema Speculation is more straightforward: although the novelization wasn’t narrated by Tarantino, it was one step away.

The most exciting aspect of both books is how Tarantino casually incorporates himself and his own work into the history of cinema, just as Jean-Luc Godard did in his own magnum opus Histoire(s) du Cinéma. During a chapter on John Boorman’s Deliverance, he mentions that the source novel’s author James Dickey wrote only three books, the last of which, To the White Sea, he himself could’ve adapted in the 1990s. After talking about Dickey for a while, he brings up that, “there was a script by David Webb Peoples and the Coen Brothers, which was terrible,” and that his agent sent it to him “as a star vehicle for Brad Pitt”—this is a book about an Eskimo.

Another instance is his aside about nearly remaking John Flynn’s The Outfit in the late-1990s with Robert De Niro taking the Robert Duvall role, Harvey Keitel instead of Joe Don Baker, and Pam Grier instead of Karen Black. “And just typing that out now makes me wish I had just made it.” Most of Cinema Speculation is fresh material, even for those who keep up with the New Beverley website reviews (surprisingly, there’s no chapter on Summer of ’42, although it’s mentioned several times). You may have heard or read him rhapsodize about Rolling Thunder, Taxi Driver, Brian De Palma, or Kevin Thomas, but without going completely beyond the interviews he’s been giving for 30 years, with Cinema Speculation, Tarantino is slowly carving out his memoirs.

I’m not sure he’ll ever write a straight memoir, since his storytelling is so at odds with that structure. What he’s done with these two books is introduce major people from early in his life, like his stepfather Curtis Zastoupil, portrayed affectionately in Once Upon a Time but much rougher in Cinema Speculation. “Curt” was charming at the Drinkers Hall of Fame with Rick Dalton and Jim Stacy in February 1969, but from 1970 to 1973, he sounds like a mixed bag, to be generous. The depth of Tarantino’s suffering as a boy abandoned by his own father and so many subsequent father figures is what he’s chipping away at in these books. If he ever does make a 10th and final film, it won’t be about him as a kid—he’s not going to make The Fabelmans, or Armageddon Time. It’s too painful.

The book ends with a “footnote” that comes near the start of a chapter on Tobe Hooper’s The Funhouse. He mentions that he saw Eaten Alive, Hooper’s 1976 follow-up to The Texas Chain Saw Massacre, with a middle-aged black man named Floyd who was renting a room in his mother’s house at the time. The final “footnote” is the most moving and sad part of an otherwise vivacious and inviting film book, one that’s necessary reading for anyone interested in the medium, alongside Robert Bresson’s Notes on the Cinematograph, Sidney Lumet’s Making Movies, and the collection Godard on Godard. Floyd, while a fun and helpful friend at times, was a “mercurial” mixed bag, someone who stood up young “Quint” twice earlier in the 1970s on planned Saturday outings to the movies, a really nasty thing to do a kid that looks up to you.

But later in the decade, they saw plenty together, and for however “flakey” Floyd was, his epic black revenge western Billy Spencer screenplay stuck with Tarantino through the writing of his own Django Unchained, which while he claims “shares no ideas, scenes, characters, or concepts” from Floyd’s script, the central character—a renegade black slave out for revenge and nowhere to go back to—“was at the very heart” of Django Unchained. Tarantino laments not thanking the long presumed dead Floyd when he won the Oscar in 2013 for Best Original Screenplay. Despite his fairytale career and living legend status at the relatively young age of 58, all of Tarantino’s work, to different degrees, comes from such a well of pain and sadness. It’s not unhappiness, but the melancholy of achieving your dreams, and looking back and finding everyone who didn’t, whether you knew them or not.