The Holocaust as Spectacle

The White Hotel and the fascism of film. 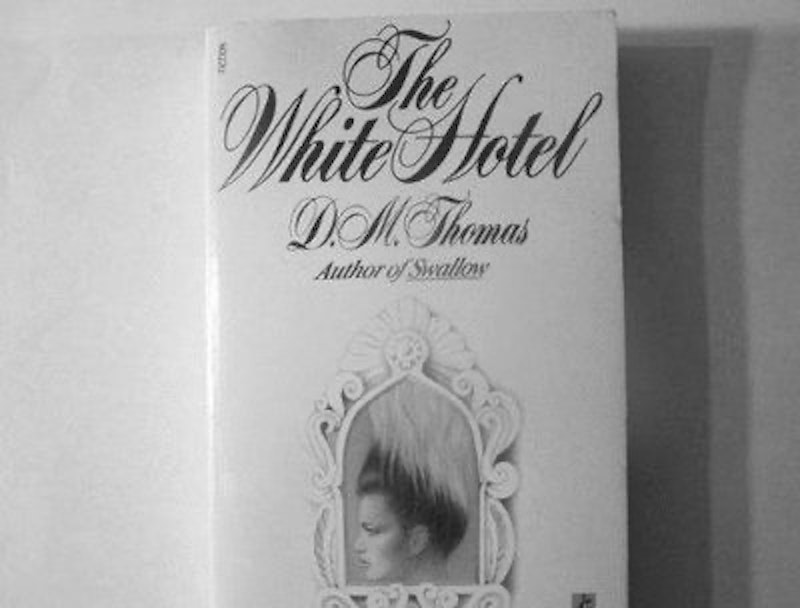 This is part of a series on fascism in film. The previous entry, on Voyage of the Damned, is here.

The White Hotel isn't a movie, though it's not through lack of trying. The novel The White Hotel by D.M. Thomas was published in 1981 to much acclaim, and Hollywood’s dragged it through development hell ever since. At various times the film was supposed to be directed by Bertolucci, Cronenberg and Lynch. Meryl Streep was attached until she wasn't; before that Barbara Streisand was in and then out. Thomas wrote an autopsy about the experience for the Guardian in 2004. He wrote a book about the ongoing failures in 2008 titled Bleak Hotel, so at least he's been able to cash in on the disaster to some extent.

Reading The White Hotel, it's hard to believe anyone thought buying the film rights was a good idea in the first place. The book is a resolutely literary endeavor. The first third or so is devoted to poetry and prose versions of a morbid erotic fantasy penned by Lisa, a moderately successful opera singer of Ukrainian Jewish and Catholic background. The fantasies involve a journey to a white hotel, where Lisa fucks Freud's son day and night as other guests die in a series of fires, landslides, and other accidents. Lisa has psychosomatic asthma attacks; the fantasies she writes are part of her treatment with Freud, whose case study of her is the next part of the novel. Finally, the concluding chapters follow Lisa as she pursues her career, moves back to Ukraine to marry another opera singer, and is murdered by the Nazis at the notorious massacre of Babi Yar. Lisa then travels to heaven where she reunites with her estranged mother, who died in a fire during an adulterous affair with Lisa's uncle when Lisa was a child.

This obviously doesn't sound much like most big-budget Holocaust stories—and deliberately so. Hollywood's approach to the Holocaust is often spectacular, in the sense that it’s about spectacle, drama, and iconic moments of salvation or despair. The most famous sequence in the most famous Holocaust movie, Schindler's List, is Spielberg's purely visual evocation of the individual horror of the genocide. In the black and white film, we see a single girl in a red coat in passing. Much later, we see her corpse, identified again by the red coat. Spielberg marks one innocent child to stand in for the six million dead. She's a symbol for everyone, a visual cue to signal the audience to care. Her individuality is her surface; she's transformed into a flag of suffering, and the viewer is supposed to salute.

The White Hotel has symbols too, but they're not external and visual. Instead, they're couched in the private, interior, multiple language of psychoanalysis. Lisa's symptoms are pains in her left breast and womb. Freud believes these are linked to her anger at her mother, who was having an affair with her twin sister's husband. Freud also thinks that Lisa is denying her own homosexuality—a diagnosis that never quite seems to pan out, inasmuch as Lisa only seems to be attracted to men. Finally, the pains are linked to Lisa's death; she’s psychic, at least to some extent, and she’s killed at Babi Yar by a bayonet in her left side and then buried. Fear of asphyxiation too echoes back through her life, as if the Holocaust shadows everything that came before it, as well as everything after.

It's not just the Holocaust that echoes through Lisa's life, but Judaism. Lisa's father is from a Jewish family. She has traumatic encounters with anti-Semitism; she’s raped by bigots who shout slurs at her. Trauma and anger at her father sometimes make her wish she weren't Jewish, or deny being Jewish, and in fact she’s religiously Catholic, like her mother. She wears her mother's cross, and plays with it unconsciously when she isn't honest with Freud, allowing him to ferret out her falsehoods. One of the things he reads through the cross is the possibility that Lisa isn't Jewish at all; she has a surprising facility with languages, like her uncle, and she may be his child, which would mean she has no Jewish heritage.

Lisa's husband, Victor, is Jewish, and so is her stepson, Kolya. After Victor is murdered in one of Stalin's purges, Lisa is Kolya's sole parent; she is hoping to emigrate with him to Israel when she’s caught up in Babi Yar. Not being Jewish almost allows her to escape; she tells a guard she is Ukrainian, not Jewish, and her papers prove it. The guard lets her out—but he won't release Kolya, despite her pleas, and won't let her join him, because only Jews are supposed to be executed.

So she has to make the official think that she is in fact Jewish, even though by her own lights she is not. "I am a Yid!" she cried, struggling to get past his arm. "I am! My father was a Yid. Please believe me!" She finally convinces him, and rushes to her death in order to be with her son in his last moments. She isn't in a position to be a gentile savior, like Schindler. So she chooses to be a Jew, and die with her loved one.

In the way of spectacle and visual symbol, Holocaust films tend to present victims as iconic. Like the girl in the red coat, the Holocaust victims on screen are stand-ins for the fate of all Jews. Lisa, though, isn't every Jew; she's not even necessarily a Jew at all, until the Nazis force her to be one. If she's a symbol of anything, Thomas insists, it's a symbol of not being a symbol, but a human being.

"The soul of man is a far country, which cannot be approached or explored. Most of the dead [at Babi Yar] were poor and illiterate. But every single one of them had dreamed dreams, seen vision and had amazing experiences, even the babes in arms (perhaps especially the babes in arms). Though most of them had never lived outside the Podol slum, their lives and histories were as rich and complex as Lisa Erdman-Berenstein's. If a Sigmund Freud had been listening and taking notes from the time of Adam, he would still not fully have explored even a single group, even a single person."

Individual mystery, in The White Hotel, is a mystery of reading. The fantasies Lisa writes are visually illogical in the way of dreams; she imagines a plum having sex with an ox, people falling to their death from a ski lift in a slow motion dance, and contriving to save a falling cat as they go. One of the last striking images of the book is the adult Lisa nursing on her mother's breast, and then letting her mother nurse on hers. "She felt very happy with the lips sucking her nipple, and remarked, stroking her mother's still thick, blond hair, that she envied her the experience of suckling babies." It's perverse, silly and uncomfortable, and it demands you ask, "What does this mean?" The White Hotel insists on interpretation in order to force a confrontation with something that can’t be interpreted.

Freud says that his analysis helped Lisa accept "her mother's mysterious individuality." He also says, "No analysis is ever complete." The Holocaust is not the meaning of Lisa's life, because there is no single reading. The novel's postmodern form encourages interpretation and reinterpretation, not to resolve on one, but rather as a way to generate more mysteries.

Films have multiple meanings too. But Holocaust films, in particular, are often message films; they call for universal recognition and acknowledgement. Everyone is supposed to see the same red coat. The White Hotel is hard to imagine as a film precisely because it rejects that unanimity whereby a mystery is transformed first into a Jew, and then into a corpse.