A retrospective look at the film adaption of Less Than Zero (1987). 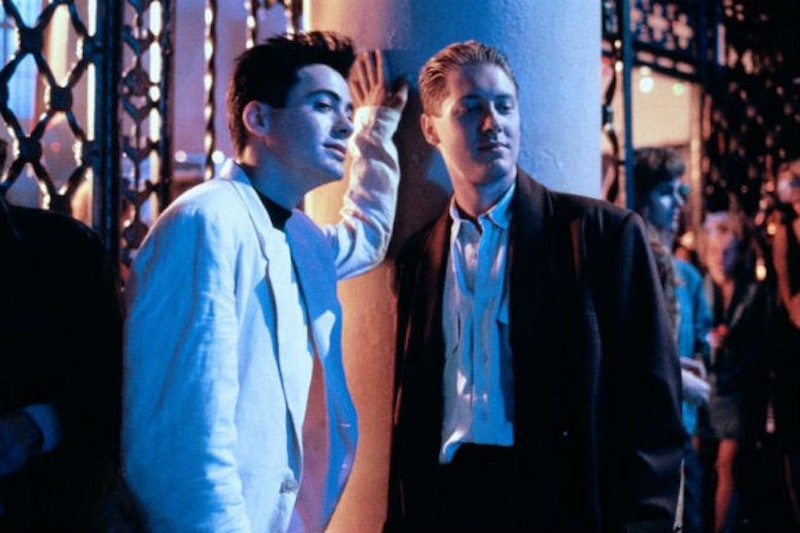 The “let’s fuck Christmas... together” party is at Alana’s house, not Blair’s. Clay (Andrew McCarthy) turns up fashionably late in a little red convertible, bright-eyed, and greets a marvelously tanned Trent outside—but this is the movie, so Trent is an extra, less than an afterthought. Inside, dozens of television sets are stacked upon one another, showing unrelated images; revelers dance and drink furiously to the only Kiss song anyone knows. A disdainful Rip (James Spader) forces a vial of cocaine on Clay that we never see Clay snort. Julian (Robert Downey, Jr.) is in a festive state of mind; Blair (Jami Gertz), dolled up like a fairy tale princess, is less than merry.

The film version of Bret Easton Ellis’ Less Than Zero spends its first half beating you over the head with the knowledge that it isn’t Less Than Zero the novel. There are no sisters for Clay, and no bisexuality. We meet Julian’s father and his asshole brother. Blair catches her Dad with a girlfriend instead of his young boyfriend. The house party in the hills where X is supposed to play doesn’t happen. The script shoves Rip up to the level of budding criminal mastermind because it can’t be bothered to introduce Finn. Gaudy, 1980s set design and art direction stand in for the nuance and subtext of the Joan Didion-influenced source material; this is post-John Hughes/St. Elmo Fire coming-of-age bait, only grittier.

Halfway through, I managed to quit hating the movie, to openly embrace it—probably because by that point Downey had stolen the picture, because McCarthy had shed his usual tics, because the story had gotten real. The bones are the same: Clay as insider-turned-outsider, Julian as in-too-deep junkie/hustler, Blair as whatever. Downey is magnetic and charming in his desperate dance towards a redemption he’ll never earn; in concert with Spader, the only other real thespian on this set, he wills Less Than Zero in the direction of greatness, almost justifying all the silly set pieces, ludicrous sex scenes, 21 Jump Street-worthy cinematic gestures, and the fact that 90 percent of the source novel was jettisoned because the studio didn’t have the guts to put it up on screen.