A neat character portrait, if you can stand the voice. 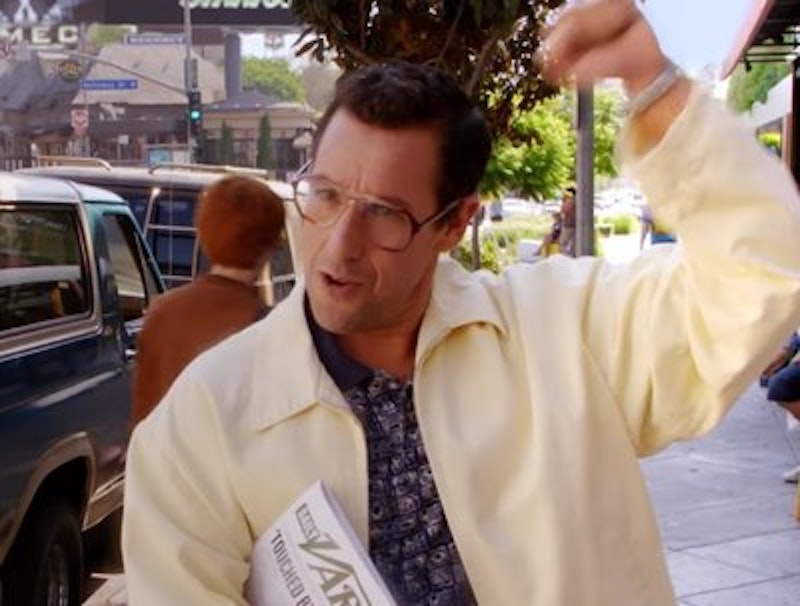 The announcer delivers the spiel. In the background can be seen Sandy Wexler, the old pro, nonchalantly counting off the beats. Announcer: “Please let’s welcome, Wild…” Sandy nods.  Announcer: “Gary…” Another nod. Announcer: “… Roberts!” Sandy’s hands appear from out of the pockets of his sports jacket. He gives a wide-elbowed, lazy round of applause, just doing his bit as the audience roar detonates. But there is no audience and no roar. Sandy’s client is appearing at El Segundo Motor Home Court, and the few geezers on hand aren’t paying much attention. Not only that but the client’s name is Rodgers, not Roberts. “He said that,” Wexler tells Wild Gary. “He said Rodgers.” Wild Gary isn’t mollified. “Yeah, because I told him to!” he says. Sandy: “He said it the first time. I wish we could… Because he did say it the first time.” He won’t let go of that idea. As Wild Gary climbs the long ladder to his ill-advised trapeze stunt, Sandy confers with the announcer. “It’s Gary Rodgers. You said that, right?” The announcer replies that he got it the second time. “Yeah,” Sandy says equably. “But you knew it.”

Sandy Wexler is about a man who’s convinced he’s a Hollywood operator. At two hours and change, the movie should’ve lost a lot of its middle. But it’s better than you’d expect. Adam Sandler has a reputation as a public pest, and his new Netflix movie is a one-trick pony built around what might’ve been a sketch character. Sander plays the whole thing in one of his gummy-mouthed funny voices, just this side of baby talk. Many people can’t stand that, and who can blame them. But his Wexler is still a fascinating creation. A fiftysomething talent manager with a string of no-hope clients, Wexler is a klutz and a non-stop, reflexive liar. That lying makes the character. Wexler fakes his way through life, squirms his way from one moment to the next by figuring out what he’s supposed to say. Listening to Sandy’s raps, it’s hard not to admire their doomed phoniness. Somehow they sound like exactly the thing an operator would say in a given situation, but in saying them Wexler comes across as a man who’s trapped in a life-time pretense of being a Hollywood smoothie.

What redeems him is love, specifically the daffy compassion he spills out for his clients. Like Woody Allen’s Broadway Danny Rose, the new Sandler vehicle is about a man who’s a show-biz mother hen. Of course, Danny Rose was a fast-talker. Allen’s rattling jabber matched the popular idea of the show-biz motormouth. Sandy Wexler, by contrast, is a man of smooth moves. He slides up on his objective, deploys his guile with beautifully conspicuous casualness. Feeling up Arsenio Hall: “Truth is, I’m not happy unless you’re happy. What say we get happy together?” In the recording studio he faces down crisis. The engineer, a stoned youth whose overalls are falling off him, forgot to press record for Hudson’s first demo. “All right, that’s where we are,” Wexler says, cool, a man who deals. Of course, he doesn’t notice that the engineer’s out of it, or that the second take doesn’t get recorded either.

Broadway Danny Rose was presented as a tall tale told by comedy vets looking back on the 1960s. Sandy Wexler’s remote era is the 1990s, and the period references get a workout. (Wexler likes Blockbuster for the long term, but says take your money out of Apple.) Various comedy vets in black tie—they’re Hollywood-based and prosperous, as opposed to Rose’s New York schleppers—recall Sandy’s fake laugh, his open-mouthed chewing, and his unexpected life-changing romance with a client. The vets are Lorne Michaels, Judd Apatow, Conan O’Brien, and so on. The client is played by Jennifer Hudson, whose character is discovered by Wexler and launched on a sensational recording career. Sandy bows out because he figures he’s too much of a schlub to help her in the big leagues. But in the end manager and client reunite. They realize they love each other, and the movie closes with their wedding. Wexler, or Sandler, entertains the guests with many verses of “There’s No Business Like Show Business.” He sings it well, for an amateur. At the same time he sings it laughably, because of that gummy voice and his conviction that he isn’t being hokey. If you’re of a certain mind, you’ll find that touching. I did and I recommend Sandy Wexler. But be prepared to skip the middle.