The End of Stefon

When you botch your swan song. 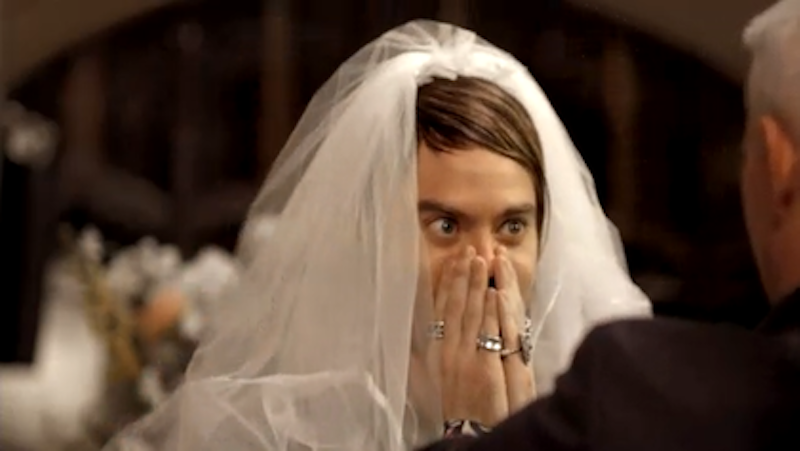 There's a classic Seinfeld episode where Jerry has to make a really big decision: it's either his "Excuuuuuse me!" ejaculation, or his girlfriend. There's a long-ish scene where Jerry is wandering the city, trying to figure out what to do. Then you see his eyes light up, and he turns and starts booking it along the edge of a pier, pigeons scattering, and then he shows up on the girlfriend's doorstep, and she opens the door, and he unleashes an especially impudent "Excuuuuuse me!" The "Stefon" send-off on Saturday Night Live last weekend reminded me of that, the bit where we see Seth Meyers tearing through NYC after dark, desperate to crash a particular wedding, hair wild and jacket flailing.


Because Saturday's episode marked Bill Hader's last hurrah—and, probably Meyers' last hurrah—it was by necessity Stefon's last hurrah. I've gone on at length about Stefon on this site, and I stand by my assertion that the concept has been one of the sketch show's best running gags over the last several years. Saturday Night Live and its fanbase agree with me, apparently, because none of Hader's other characters merited a send off of any kind.

But let's backtrack to a year or so ago, to a standard-issue Stefon appearance on "Weekend Update." This is key, because it's the moment where Stefon—pardon the cliché— jumped the shark for me: when, as the bit wound down, Stefon French-kissed Meyers. Just like that, the tension and intrigue—the teasing, semi-obsessive energy Stefon projected—was gone, vanished; it was like what old-school Law & Order: SVU would've been like had Benson and Stabler jumped into bed together.

The send-off, where Stefon is about to wed Anderson Cooper only to have Meyers show up at the end and bust up the nuptials, was less horrific by several degrees of magnitude. Yet I don't understand why it had to happen at all, let alone the way it did; the damage was done, the fix was already in. The decision to explicitly literalize most of Stefon's psycho-sexual/fetish delusions, let alone make all of them wedding invitees, ranks among this show's worst offenses ever. Not because all of this shit is weird to see on screen, but because half the fun of the Stefon bits was the charge of vividly imagining Furkels or human fire hydrants or insert-deranged-construct here actually existing in a dimly lit club with strobes and bad house music pulsing. I never actually wanted to see these creatures, and by making the manifest, the show let the air out of its own suggestive balloon. Lame.