“If you mess with the bull, you get the horns.” 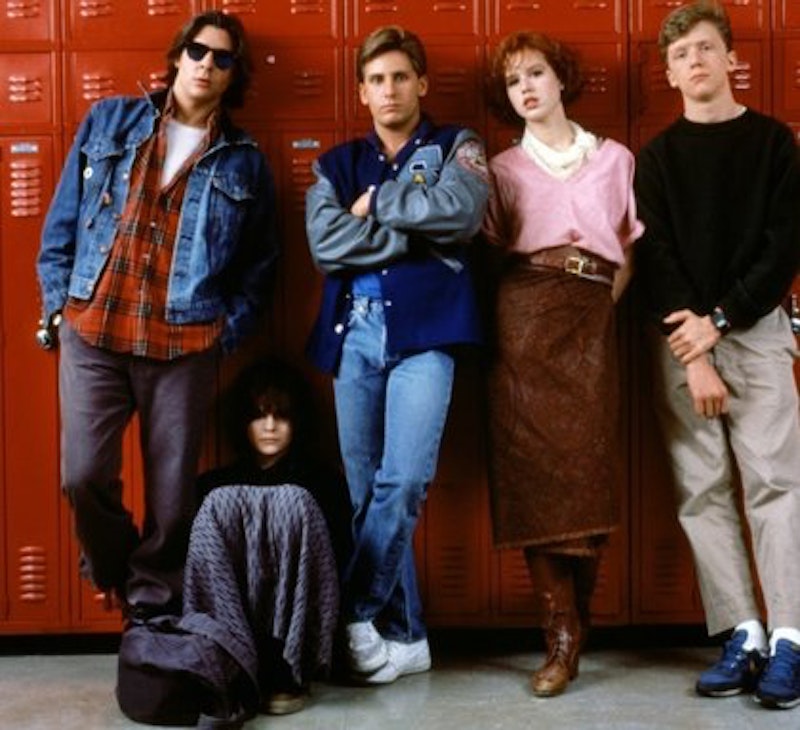 I graduated from high school in 1987, which qualifies me as much as any other 80s punk raised on Fun Dip, Love Boat, Garbage Pail Kids and Aqua Net hairspray to choose the best movie of the decade. It can certainly be argued that the late John Hughes was one of the best filmmakers of the day. I'm only saying “one of” the best because I don't feel like arguing with the Spielberg people in the comments section. While Hughes' Pretty in Pink, Sixteen Candles and Ferris Bueller's Day Off were all fantastic films, I go with The Breakfast Club for best film of the decade for a number of reasons.


Writing: All the reasons this film is supreme circle around to this one: the writing. John Hughes was at the top of his game on this script: there isn't a wasted word. And he manages to strike the perfect tone of humor-meets-humanity in the tale of teen angst. It's relatable, poignant, sardonic and oftentimes hilarious: an emotional roller coaster, but one that never jerks you around too much like the wooden ones. Also, urban-dictionary wise, so many terms were born. I remember my high school peers using the acronym “HBI” to stand for hot beef injection, the insult neo maxi zoom dweebie (or its nickname “dweeb”) and many other random references (when someone says “Is that clear?” 80s kids answer “Crystal.”)

Flawless Acting: Every single character is perfect. From the five actors who play the high school students (my personal favorite is Judd Nelson as John Bender: "Screws fall out all the time, the world is an imperfect place.") the principal (RIP Paul Gleason as Richard Vernon) and the janitor, each actor embraces his or her role and delivers lines seamlessly, creating countless memorable moments in the film.

Humor: "Does Barry Manilow know you raid his wardrobe?" The humor is not ha-ha funny. It’s dark. It’s sarcastic. The humor is in the delivery of the stellar lines. You laugh at times when you’re not supposed to, when something is politically incorrect. You don’t laugh when things are on-the-level funny. Sometimes you laugh at a simple facial gesture. The Breakfast Club is funny without trying to be funny.

Coming of age theme/transformation: Hollywood and the people who watch movies want to see characters change and grow. This film not only captures the high school stereotypes (the athlete, the popular girl, the nerd, the bad kid/druggie, the outcast) without any of them being clichés, but it manages to accomplish transformations in each of their stories so that they learn, grow, and leave the Saturday detention at the end of the day having learned something about themselves and their peers.

Breakfast Club: The Musical: No, I don’t hope Broadway ever, ever fucks up The Breakfast Club by making a musical out of it. I would cringe, and not go, and be sad. But the film features one of the most famous 80s movie soundtrack songs (“Don’t You Forget About Me” by Simple Minds) and cool instrumental pieces in addition to some memorable semi-dance routines in the library. Adding music without adding a cheese factor (see: Footloose, Dirty Dancing) is a win.

Timelessness/Quirkiness: The film is not boring for a single moment. Despite the entire setting being mostly in one room, the quick pace of the dialogue, inclusion of things like Cap’n Crunch and Pixy Stix sandwiches, and exchanges like this:

Brian Johnson: I'm a fucking idiot 'cause I can't make a lamp?

John Bender: No, you're a genius 'cause you can't make a lamp.

Brian Johnson: What do you know about trigonometry?

John Bender: I could care less about trigonometry.

Brian Johnson: Bender, did you know without trigonometry there would be no engineering?

John Bender: Without lamps there'd be no light.

Sex, Drugs and Rock & Roll: There are all three in Breakfast Club, and plenty of them. What coming-of-age 80s high school film would be complete without the absolutely brilliant blend of these three crucial elements?