Star Trek: Into Darkness Is All Action, Meta-Homage 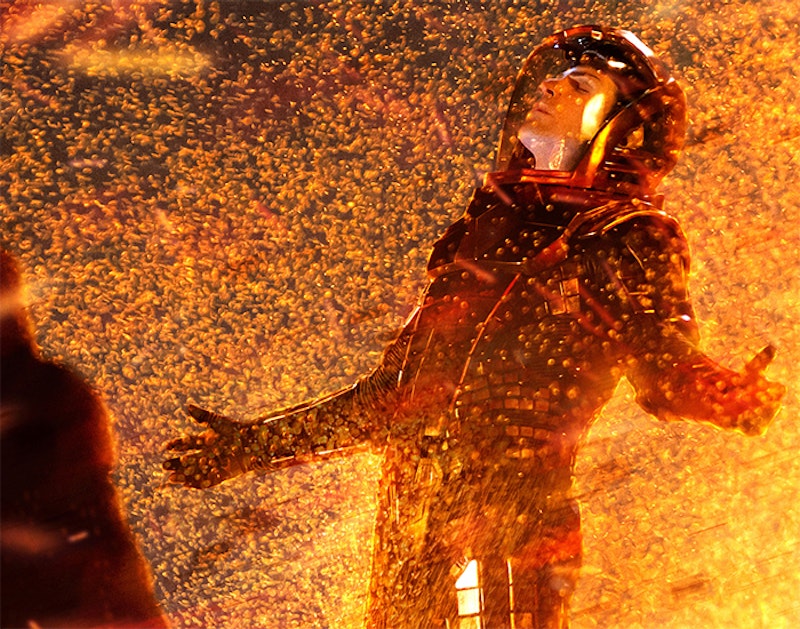 When I was six years old, my father sat me down on the couch and popped Star Trek II: The Wrath of Khan into the VCR, intent on making a Trekkie out of me through a viewing of the 1982 classic, in which Ricardo Montalban as a genetically engineered tyrant exacts cruel vengeance upon Jim Kirk and his friends. I had no prior knowledge of the series and no conception of who Kirk, Spock, or anyone else was, but I remember feeling thrilled by the entire experience. Thirteen years later, J.J. Abrams’ reboot of the Star Trek franchise elicited many of the same feelings for me; though by that time I’d seen enough of the original series to pick up on the frequent callbacks Abrams made, it was still a fresh and passionate take on one of my favorite sci-fi universes. My girlfriend, mutual friend Matt and I walked into the theater last Friday night with great anticipation to see Abrams’ sequel, Star Trek: Into Darkness, a loud and blisteringly awesome summer blockbuster that remains thoroughly entertaining despite some dramatic missteps in execution.

Star Trek has gotten a reputation since The Next Generation for being primarily focused on morality plays and matters of philosophy. In contrast, the original series—though it also dabbled in similar thematic elements—was more often concerned with character-driven plots and action, so Abrams’ experience with action-adventure shows like Lost and Alias serve him well. Into Darkness is a film with a breakneck pace, one that begins with Chris Pine and Karl Urban sprinting through an alien jungle, pursued off a cliff by spear-wielding natives, while Zachary Quinto as Spock attempts to freeze an erupting volcano from the inside—and then makes everyone keep sprinting from scene to scene over the next two hours.

This constant need for speed isn’t always good; while it heightens the tension, it also gives the characters very little time to develop organically. Example: Uhura and Spock’s relationship, established in the previous film, is on the rocks due to Spock’s apparent disregard for his own mortality. Spock’s explanation—an monologue from a visibly choked-up Quinto about burying his grief over the destruction of his home planet in traditional Vulcan emotionlessness—should be moving and heartfelt; though Quinto’s performance is commendable, it’s forced into an awkward transitional interlude while Kirk and Uhura ride in a small shuttlecraft with him between chase scenes. It’s just an island of characterization in a sea of impossibly huge action sequences. The villainous Khan (played to perfection by Benedict Cumberbatch) has a nebulous motivation that is never fully explained until the movie is almost three-quarters over, and then in a piece of exposition from Kirk. In an action movie, finding a balance between characterization and set pieces is key, and Abrams regrettably places far too much emphasis on the latter.

That said, the action is fucking cool. Scenes like the frantic opener and Kirk and Khan’s high-speed “space walk” through a field of debris are thrilling, and it’s all because Abrams sets the stakes high and keeps them there constantly. Every character is in mortal peril almost constantly, keeping the audience guessing at every turn. I admit that this might be where my personal bias comes into play; I was concerned for everyone’s survival, but I can’t say for sure if other viewers will share my investment in the characters, given that very little time is devoted to exploring why any Trek newcomer should be concerned about any given member of the Enterprise crew.

Devotees of the original series and the subsequent movies have been eager to deride Abrams’ new Trek timeline as shallow and derivative, reliant on cheap references to former continuity to endear itself to the old guard while it pursues the summer action-flick audience with phasers set on kill. They’re not entirely wrong; though it’s loosely based on Wrath of Khan, writers Roberto Orci, Alex Kurtzman, and Damon Lindelof have also borrowed from Star Trek V: The Undiscovered Country, from whence comes a sinister plot from senior members of Starfleet to engineer a war with the Klingon race. We also get the triumphant return of time-honored Doctor McCoy catchphrase “Dammit, Jim, I’m a doctor, not a (fill in the blank)!” and Quinto gets to channel the spirit of William Shatner and bellow an enraged “KHAAAAAAN!” to the heavens.

But when viewed in the context of the movie itself, these are not bad—in fact, they’re fun. The scream, while cheesy, is successful both as a callback and a reasonably dramatic character moment, and anyway, Abrams has done plenty of new stuff with the Trek cast. John Cho as a revamped Hikaru Sulu has an entirely unexpected moment of crowning badassery while threatening to blow Khan to smithereens, and while McCoy’s horrifically clichéd “Remind me never to piss you off” reaction line is truly lame, it’s still a great moment for Cho—and his character. The cheesiness of all of this is in itself reminiscent of the original series, transforming simple derivation into meta-homage.

More importantly, Abrams and Co. successfully invert the themes in Wrath of Khan while keeping its overall message the same. While the first movie was about the process of growing old and the specter of death, this film is about the youthful necessity of finding oneself, accepting responsibility, and becoming a fully realized adult. Both, however, address the inherent tragedy of vengeance, ending in a condemnation of the retaliation doctrine and a call for brotherhood above all else. Star Trek: Into Darkness might be more ham-fisted in its execution and contain roughly 500 percent more explosions and lens flares, but it gets the job done in an intensely enjoyable fashion.