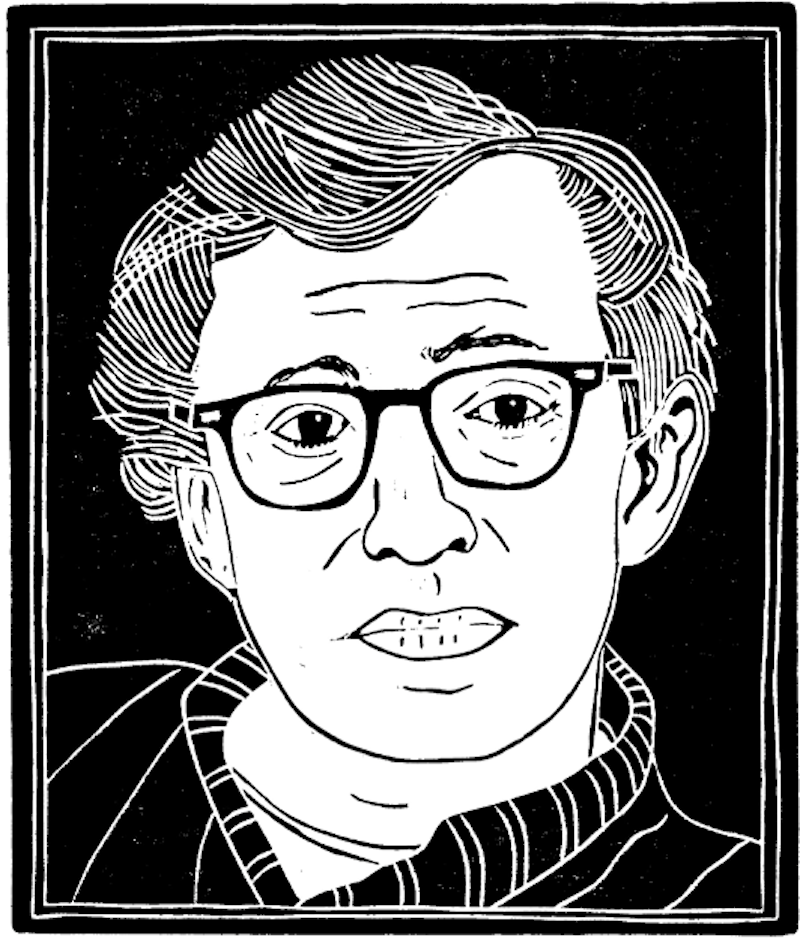 From 1977-1986, Woody Allen had a filmmaking run so impressive it's been equaled only by the likes of Billy Wilder and Preston Sturges. Allen's films included Annie Hall, Manhattan, Broadway Danny Rose, Zelig, Purple Rose of Cairo and Hannah and Her Sisters. Allen was an antidote to the Spielberg/Lucas blockbuster ethos that was transforming Hollywood from a land of independent auteurs into a money-making kitsch machine. Allen effortlessly combined comedy and drama and his movies were inspired gems that paid homage to filmmakers like Bergman, Fellini, Chaplin and Keaton.

As a star in his own films, Allen was the anti-leading man. Neurotic, self-obsessed, needy and cowardly, he perfected the art of awkward encounters (paving the way for Larry David). The original title of Annie Hall was Anhedonia, which refers to a psychological condition where the sufferer is incapable of feeling happiness. Yet watching Allen struggle and squirm brought tremendous happiness to the audience. Not just because he was hilarious but also because he was like us (assuming you are male, Jewish, neurotic and living in a big city).

Allen's childhood comic influences were the writers Robert Benchley and S.J. Perelman. He was also attracted to the dramatic work of Chekhov, Balzac, Tolstoy and Eugene O'Neill. Allen’s career began in his teens when he submitted jokes to an advertising firm. He spent one "abortive year" in college then dropped out to become a gag-writer for Garry Moore & Sid Caesar. He wrote 50 jokes a day while riding the New York subway. In the early 60s, he performed stand-up comedy in Greenwich Village releasing three comedy albums. He started making television appearances and writing for shows like Candid Camera and The Ed Sullivan Show.

In 1965, United Artists prepared a starring vehicle for Warren Beatty called What's New, Pussycat? (The film was allegedly named after the way Beatty answered the phone.) Allen was hired to add jokes to the script. He ended up re-writing the entire film as well as landing a co-starring role. Beatty dropped out, which began a decades-long feud between him and Allen. Pussycat marked the formal start of the filmmaker’s career. He was 29 years old.

From 1965-1975, Allen made screwball comedies. They included Take the Money and Run, Bananas, Sleeper and Play It Again, Sam. The films were a collection of gags loosely structured around a thin narrative. Allen's goal was to make people laugh. By 1975, he was ready for a change. He was interested in writing real characters with an honest range of human emotions.

In 1977, Allen released his masterpiece Annie Hall. The film is a love story between an anxiety-plagued Jewish writer and a neurotic, WASP singer player by Diane Keaton. Told in non-linear fashion with inspired fantasy sequences, Annie Hall focuses on the unrealized aspects of relationships: irrationality, paranoia, jealousy and difficult sexual encounters.

Two jokes from Annie Hall perfectly sum up Allen's screen persona. One: "I believe life is divided into the horrible and the miserable. The horrible are the terminal cases, blind people, cripples. The miserable are everyone else. So you should be thankful you're miserable.” Two: "My brother's crazy. He thinks he's a chicken. I would turn him in but we need the eggs." The jokes exemplify Allen's obsession with death and despair and his surreal approach to comedy.

Allen's humor owes as much to Groucho Marx as it does to the Jewish tales of the Fools of Chelm and the stories of the 13th Century Sufi mystic jester Nasruddin Mulla. (In a classic Sufi tale, Nasruddin misplaces his keys inside his house but searches for the keys outside the house. When asked why he replies, "The light is much better here.") Allen's one-liners in Annie Hall are classic. ("I was thrown out of college for cheating on the metaphysics exam. I looked into the soul of the boy sitting next to me.") Despite Allen's nebbish demeanor, he succeeds as a romantic lead. He uses humor as self-defense against the confusion of the modern world.

Annie Hall won four Academy Awards including "Best Picture" (beating out Star Wars) and "Best Actress" for Diane Keaton. Allen avoided the Oscars, opting instead to play clarinet at a New York pub. He has never enjoyed the concept of judging art in a competitive setting as if it were an athletic event.

Keaton was Allen's muse for eight films. In 1982, Woody began a collaboration with a new muse: Mia Farrow. They made 13 films together including the 1985 classic A Purple Rose of Cairo. Inspired by Buster Keaton's Sherlock, Jr. and Allen's own 1977 short story “A Kugelmass Episode” (in which a humanities professor magically appears in the novel Madame Bovary), Purple Rose is a charming ode to the healing power of movies. Farrow plays a Depression-era woman who escapes her dreary existence by watching movies at the local cinema. During one of her favorite films, the male lead played by Jeff Daniels steps off the screen and into Mia Farrow's life. The story merges the surrealism of Luis Bunuel with the populist leanings of Frank Capra. Even Allen himself, now 77, who hates watching his own movies, claims Purple Rose as one of his favorites.