Here's to a franchise no one really wanted. 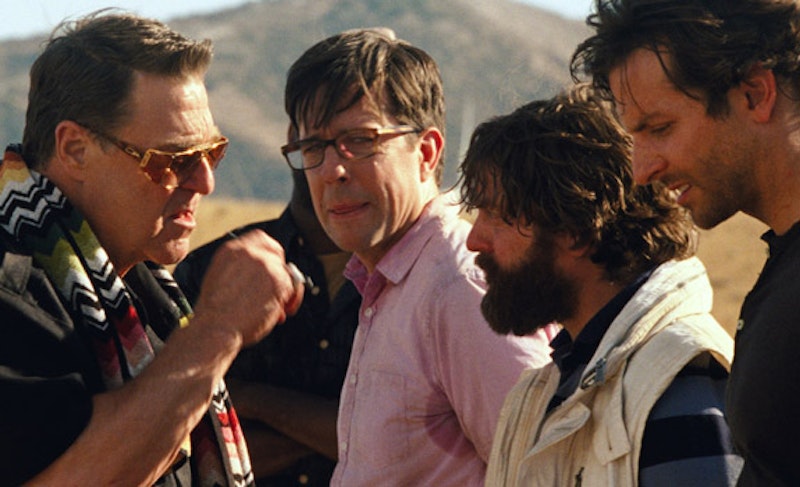 In 2009, The Hangover exceeded expectations and was the highest grossing R-rated comedy ever, making hundreds of millions of dollars and becoming a cultural touchstone as ubiquitous as Ghostbusters or Animal House. The three leads (Ed Helms, Bradley Cooper, and Zach Galifianakis), instantly had the cache to pick whom they worked with and what on, after trudging through more modest success. There’s a reason the first Hangover still works: it’s tight as a drum, a movie where the set-up, players, pacing, and throwaway jokes are carefully constructed and arranged, but appear totally effortless. Lots of laughs-per-minute—a ratio that no test audience will ever raise, and not something you can throw money at.

This is the kind of movie the marketplace is always wants. So naturally two years later there was The Hangover Part II, a movie that so shamelessly rehashed its predecessors it actually upset the American moviegoing public, which just roundly endorsed a sixth Fast & Furious. Todd Philips & co. gave their studio and their audience exactly what they wanted, and they were dismissed, if not ripped apart for it (which is worse?). The precision and grace of The Hangover made its pallid sequel feel absolutely inessential and mediocre. Why bother? It offered nothing new, resembling someone who’s overstayed a welcome at a party by hours. Part II destroyed almost all their good will and made the first film look worse, and even though it made money, almost no one was excited for Part III, the reflective end to a trilogy that everyone asked for but doesn’t want anymore.

The disappointment has registered with Philips and all the leads, as Part III is more of a wistful extended send-off to these characters than another alcohol-induced amnesiac absurdity blowout. To me this is the best possible move: Part II took zero risks, and for once that backfired. Aside from just stepping away, I don’t think there could’ve been a better way to go about a third Hangover, because invariably, the original will be canonized and the sequels forgotten, like countless other sleeper hits that became unwilling franchises. It’s unassuming and eager to make fun of itself and its formula. The best joke is how carelessly and without thought Justin Bartha’s character, the series’ Private Ryan, is dispatched this time. As with Part II, there’s a dearth of new material, and a sense that the party is long over, except now the filmmakers are in on it. Despite a heavy focus on Ken Jeong’s one-note Chow (who near the end screams “I LOVE COCAINE!”, a line that’s delivered with the knowledge that it’s practically placeholder text), there’s a humility and a graciousness to the proceedings, an acknowledgement that this is all completely unnecessary, but it needs to happen, so let’s grin and bear it. Instead of another ambitious international scenario, the movie ends up where it started in Las Vegas, winding down, aware of its own superfluousness.