The Bitch Is Back

Young Adult can't even reach the heights of Bad Teacher. 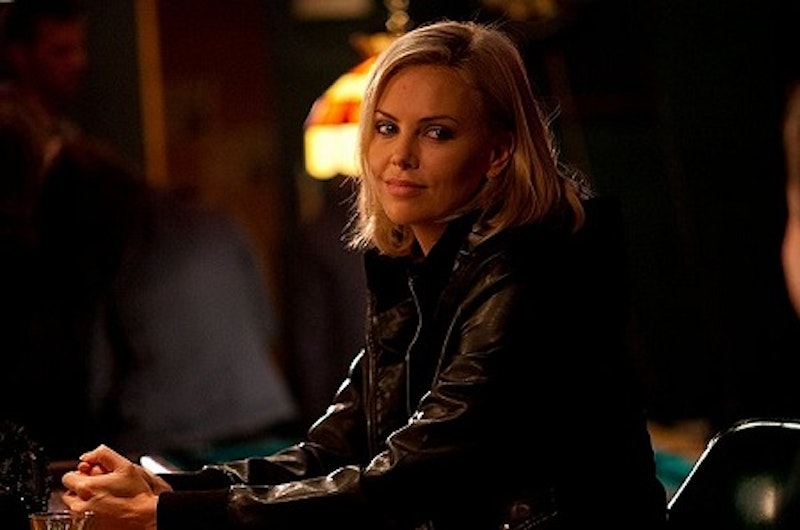 Bitch is hard to pull off. For the second time this year, we have a movie with an A-list actress as a delusional and stunted former-popular-girl with a bad attitude: Bad Teacher with Cameron Diaz back in the summer, and now Young Adult, a far more dour and clinical study of what it means to live your life as a crazy bitch, starring Charlize Theron. Jason Reitman directed and Diablo Cody wrote this one, but unlike their film Juno, there’s no effusion of shiny lingo or wide-eyed teenage wonder; instead, we get Mavis Gary, a mid-30s, delusional psycho-narcissistic young adult ghostwriter with as much ambition as a Barbie doll. Mavis frowns, scowls, whines, belches, and eviscerates with a stare, but she never comes off as anything but the worst prom queen imaginable. You want her to fail.

Reitman and Cody’s film is shot like an IKEA promotion. Sometimes it feels like we’re looking at a furniture commercial: Charlize can get that super-vacant model stare going on as she’s lounging on the couch, eating KFC, but shots of her being mad/sad/alone in her apartment or hotel just make me despise her more. Remember, this is the girl who slept with every player on the football team in high school. She probably called you “faggot” at least twice, or even worse she refused to acknowledge your existence. I have no sympathy for someone like this, especially since Mavis is responsible for all of Mavis’ problems. If Mavis the Younger appeared in Juno, there’s no doubt she would be eviscerated for what she is: someone who reached her zenith in senior year. No sympathy. And now, in her mid-30s, bored and lonely, she makes an earnest effort to steal her old sweetheart from his wife and kid.

Cameron Diaz played essentially the same character in Bad Teacher, but she was a riot because the movie was sillier. The stakes were lower. This kind of person comes off more like an absurd caricature to giggle at rather than a flawed but redeemable human being. There’s even a scene that appears in both: the pretty girl talking to a homely girl. In both, Diaz and Theron’s characters know that they’re having a conversation with someone lesser than them, beneath them. You saw this scene play out endlessly in high school: not-so-pretty girls worshipping and following to the word every photogenic bimbo, no matter how mean, vain, or selfish. I have a hard time rooting for that the way Young Adult wants me to.

This film’s tone is very confused. It’s shot like an episode of Intervention, but with the weird unemotional, disconnected vibe of a car commercial. So many things are played for cheap laughs, but they’re stilted and awkward. And it all goes nowhere: Mavis’ abhorrent personality is as shallow as Young Adult’s depiction of it. We get zero insight into her psyche or why she might be this way, other than the soundbite explanation Cody probably texted to her agent. Cody’s script treads water with totally undercooked character development and an uninteresting, uneventful story. It doesn’t know what it wants to be, whereas Bad Teacher works because it knows it’s a silly, adolescent R-rated comedy about a terrible person, who can garner sympathy when the world around her is equally absurd. No dice for Mavis Gary, too much of a bitch to like and too uninteresting to care.