We Bought a Zoo is weak, sloppy storytelling. 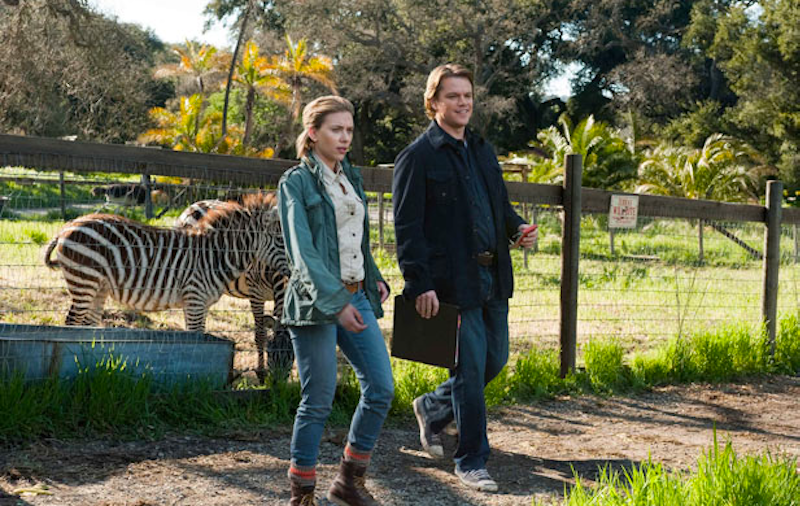 Huh? Where has this guy been? In my mind, Cameron Crowe’s always been a major director, but since 2001’s underappreciated Vanilla Sky, he’s made Elizabethtown and We Bought a Zoo, both tolerable but light as air. He’s out of ideas—why else would you waste your 40s doing nothing? Maybe he’s scared of embarrassing himself, because We Bought a Zoo comes very, very close. It’s a nice movie, but it’s punishingly formulaic and awkward, like a friend you don’t really like. At least Vanilla Sky was all wide-eyed about something a little more interesting.

This movie will be $5 in pharmacy bargain bins in six months, and if not for the cast, it’d be there now. Matt Damon is really what saves this movie from amateur wankery. His character is a lot like Crowe: earnest, corny, naïve, but endearing despite it all. This movie just wouldn’t work without the beautiful people to cover up the lame, lame, lame pre-college film student script. Scarlett Johansson would look interesting reading TV Guide, and she handles the inevitable kiss with Damon about as well as you can with such a stupid and stale device.

You will feel very, very bad for lusting after Elle Fanning, who was born in 1998. Yes, this girl is younger than Pokemon and she could be in perfume ads. Not only does she look great, but she nails it as the effusive and bubbly young farm girl crushing on Damon’s angsty son (Colin Ford). Fanning’s lovely performance ebbs more innocence and pure, unadulterated sugar without words than Crowe’s dorky sensibility ever has, and again, she does this without much of a script to work with. Patrick Fugit’s back for the first time since Wristcutters maybe, but all he gets is a monkey to play with and no brain. At least Thomas Hayden Church has some good wacky-brother lines in there.

We Bought a Zoo really feels like a 12-year-old wrote it, not only because of its fumbling sincerity and lack of depth, but the awkward and structurally weak script. Like, this would be a great made-for-TV movie on Nickelodeon, or the Disney Channel. And that’s fine—you could certainly say more made-for-TV movies should be like We Bought a Zoo. But, this is the guy that made Almost Famous, Jerry Maguire, Say Anything and Vanilla Sky. All four of those movies are dorky and naïve to different degrees, but Zoo is like a bucket of marshmallow paste with no cookies or bread, and it makes running a zoo look as fun as it is—not. So, as a holiday matinee, it’s tolerable, but not worth the $10, and probably not the two hours, either.