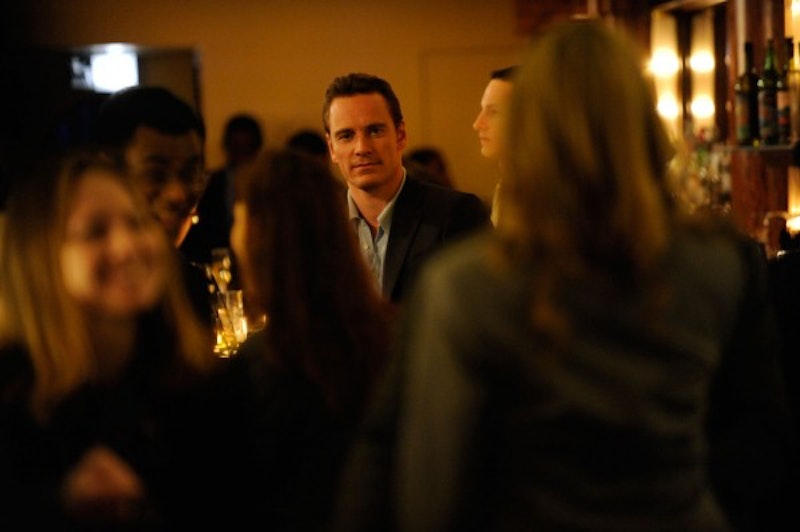 Fassbender’s Brandon Sullivan looks like a Patrick Bateman type on paper, but he’s surprisingly relatable, despite the high-rise and amoral turpitude of fucking everything that moves. The first time you see him you think Brooks Brothers model, but Fassbender emotes from every crease in his face. The film’s opening and closing scenes feature Brandon sizing up the same gorgeous redhead in the subway. They stare at each other, eye-fucking, until the guilty girl gets up and we see her wedding ring. Not a single word is spoken in either scene, for the better: you see the base, impulsive wanting in Fassbender’s creased face, and the redhead’s torrid mix of arousal and guilt. Like in 2001, most of Shame’s dialogue feels ancillary, second fiddle to the characters’ body language and their surroundings. Shame’s version of courtship is certainly closer to reality than anything Gary Marshall’s done.

I wanted Shame to go further. We never really get to see inside Brandon’s mind, what his impulses feel like to him, or any development beyond “sex-obsessed and allergic to commitment.” Reading Fassbender’s face is fascinating but whatever’s hinted in his movements never materializes—so the film feels like an undercooked premise stretched thin. The many long takes and almost meditative, buzzing tone creates a very pleasing lulling effect, almost like an afterglow, and you don’t get a visceral sense of disgust afterwards as with Happiness or Irreversible. But beneath the artful framing and staging, McQueen treads water with Brandon. We know just as much about him, his past, his sexual psyche, and his emotional dysfunction as when we saw the trailer. The film lacks a compelling and interesting story to provide a foundation for its 140-word gist and art gallery cinematography. There’s only so much you can divine from eye twitches and skin creases in Fassbender’s face. At a certain point you’ve got to ask if there’s anything there at all. Shame is a beautiful face with no guts or brains.