Technicolor and Nothing Else 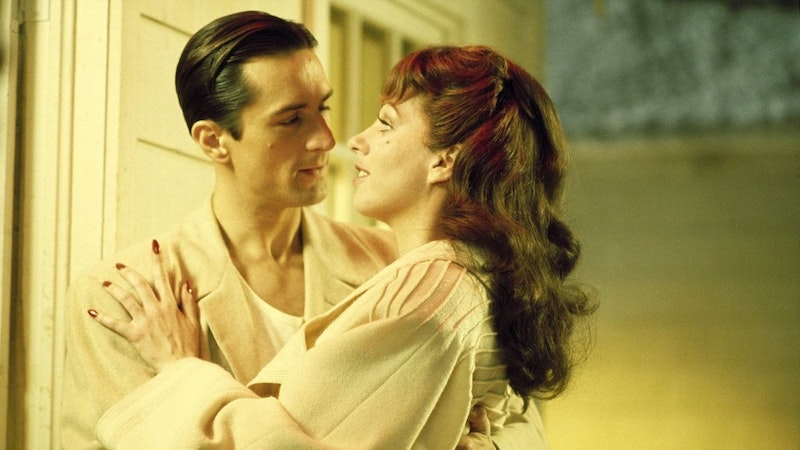 Of all the major New Hollywood directors of the 1970s to flop at the end of the decade, only Martin Scorsese and Peter Bogdanovich really delivered turkeys. Bogdanovich had Nickelodeon in 1976 and Scorsese had New York, New York a year later. Bit of a different situation: Nickelodeon was the last straw for Bogdanovich, the third in a string of flops that made him take a break until 1979 when he came back with the superb Saint Jack (a critical success, popular in Europe—to Hollywood, meaningless). Scorsese had yet to fall flat on his ass, and in 1977 he was following up Taxi Driver, his best film and one that never would’ve had the impact it had if it came out a year later, the year of Star Wars. Travis Bickle would be another cult hero, like William Devane’s vengeful Vietnam vet in Rolling Thunder, or even Al Pacino’s undercover gay cop in Cruising. If Taxi Driver came out the same year as Star Wars, Bickle wouldn’t be taped to dorm walls and hung in movie theaters, galleries, and shopping malls across the world.

So it’s good Scorsese happened to make one of his worst movies in the worst year for New Hollywood. By then, the dream was over: it’s the choice between Sorcerer and Star Wars, and everything fell apart under hubris, drugs, and unpredictable shifts in pop culture and global capitalism. By the early-1980s, most movie studios were owned by major corporations with no connection or interest in their product beyond its potential value, and this is the world we’ve been living in ever since. Again, a familiar story, as often told as Scorsese and co.’s cocaine consumption around this time, and let me tell you if you haven’t seen it, New York, New York is a coke movie. Scorsese wisely followed up the bone-bleak Taxi Driver with an earnest homage to the Technicolor MGM musicals of Vincente Minnelli (but, as always notes, before widescreen, before CinemaScope).

New York, New York is a gorgeous movie with the kind of kaleidoscopic, candy-colored lighting and set design straight out of The Band Wagon, Ziegfeld Follies, and An American in Paris. Robert De Niro and Liza Minnelli traipse around a fantasy New York, a soundstage romance for the then-modern era. Only 24 years passed between The Band Wagon and New York, New York, but they come from separate planets. On the other hand, you can watch most movies made after 1970 today and find them fairly familiar in form, without any of the hard passes or giggles induced by black and white movies made before JFK was assassinated. To bring back the lollipop productions of Minnelli in exhausted, jaded, and bored America of 1977—well, it was just as silly as trying to combine Kurosawa samurai films with old movie serials to make a new kind of “space opera.” One of those moonshots worked.

Most of the infamous flops and fiascos of the late New Hollywood period are criminally underrated, and at their worst, worth watching even as compromised curios. The look of New York, New York, and a handful of its images—particularly an over the shoulder shot of De Niro in the subway watching a sailor and a young woman dance on V-J Day as trains rush past, their shadows resembling rolling film, and the tunnel of lights that he’s dragged through kicking and screaming later on—are astonishing, but this is thin gruel for a movie that runs nearly three hours. I don’t like Apocalypse Now that much, but it’s alive. It’s messy, but it’s alive. New York, New York is just messy: it’s obvious that Scorsese shot mountains of footage and put all of his energy into details that really do pop, but leave the essentials withering (a quintessential coke movie).

Michael Cimino’s Heaven’s Gate is expansive and grand, and even if it’s slow, obscure pacing isn’t for everyone, it’s not an artistic failure. Heaven’s Gate is one of the most frank and powerful films made in the last 50 years about American imperialism and the savagery of the people that settled this country, and who had to die in order for us to live as we do now. Westerns and musicals are different, but New York, New York never approaches any of Minnelli’s classic or even mid-tier work—in fact, the only one that comes to mind is Minnelli’s last film, 1976’s incoherent A Matter of Time, also starring his daughter Liza. Besides featuring the most annoying performance of De Niro’s career in the 1970s, he and Minnelli have no chemistry, and the movie is bereft because of it. It’s one thing when you’ve got a coked-out director who won’t stop shooting takes from a million different setups, but it’s another when your leads are dull as dishwater at best and unbelievably irritating at worst. Damien Chazelle’s La La Land is a much better white man’s jazz movie, and New York, New York probably deserved worse treatment than it got at the time.

By 1980, both De Niro and Scorsese redeemed themselves with Raging Bull and The King of Comedy (another two bombs, both inexplicable). Unlike peers William Friedkin, Peter Bogdanovich, Michael Cimino, and Hal Ashby, they made it into the 1990s alive, both corporeally and professionally. And so when they croak, this is a film that will be brought up, if at all, to show that their careers were not all bread, wine, and roses after the phenomenon of Taxi Driver in 1976. But Vincente Minnelli won’t get mentioned, and neither will Fred Astaire or Gene Kelly. New York, New York is a failure in every sense, only watchable because Scorsese’s baseline is so high. But of all the directors that’ve died or disappeared from his generation, Scorsese has remained as relevant going into the 2020s—yet he’s the one that made the worst movie of the string that always gets blamed for allowing George Lucas and Steven Spielberg to take over the movie industry.