Denis Villeneuve's Dune does not disappoint this longtime fan. 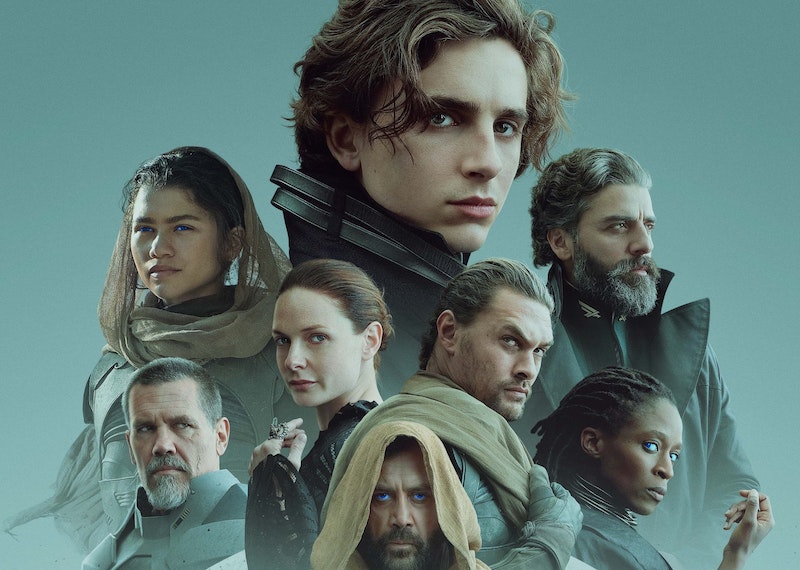 Is it better to shamble like a skin diver and breathe like a scuba diver, greeting darkness in a sea of ennui, or breathe in comfort while straining to see? Whether to dress for water, when the weather is dry and hot, or tour the desert without overheating; whether to go as Benjamin in The Graduate, or see Paul (Timothée Chalamet) get high at the drive-in; whether to go upstairs to see Dune on the big screen, or sit downstairs, inside a car, as the movie plays on a wall. Given the chance, I’d do it again, and watch Dune on my phone.

I’d connect my phone to a mini-projector, mount the device to the roof of my car, and drink to the gods; I would drink the blood of the god of the tribesmen of the Kalahari: 17 fluid ounces of carbonated water, sugar, caramel color, and caffeine. Then, I’d re-watch Dune.

To re-watch Dune is to view it for the first time, as a royal family goes from Eden to exile; as a duke (Oscar Isaac) and his concubine, and their only son, leave their native habitat for an uninhabitable land. Divinations abound in this journey, from Paul’s dreams of a maiden to his fears about the fate of his beloved knight (Jason Momoa), from the Hand of God in the heavens, the sign visible at night, to the arrival of the messiah on a planet with two moons.

The arrival marks the rise of desert power, as the duke assumes power; as he accepts power, staking his honor by stamping his ring—impressing the symbol of a falcon and the pledge of his people—in gold. So marks the transfer of power, as a herald reads from a scroll and a witch departs with a black book. So marks the end of a political bullfighter, son of an actual matador, who becomes that which hangs above him: bullheaded.

Before Dune reverts to blood and fire, and oil and poison gas, the duke tours the world of spice. The result is a cinematic tour de force in which airships fly like gunships, and soar like hawks and sweep like dragonflies, revealing a ziggurat amidst a concrete valley, in a sea of sand. The tour is also a snapshot of a viewfinder, of the view from a camera, as the plane indicator focuses on the horizon.

The picture shakes with the ground, screaming across the desert, razing peaks and swallowing ships—drowning men and machines—in a tsunami of sound and fury.

In the foreground, facing the ground, Paul frees his mind.

All Dune is this scene, before the fall of the father and the rise of the son; before a beast breaks the surface and enemies surface from the sky; before war conquers peace and hate murders love.

The scene speaks to what Paul later says to himself, before he clutches the ring and lifts the sword.

The words speak to us still: Fear is the mind-killer.