Now we know there will be more Sopranos Stories, and they will be just as pitiful as The Many Saints of Newark. 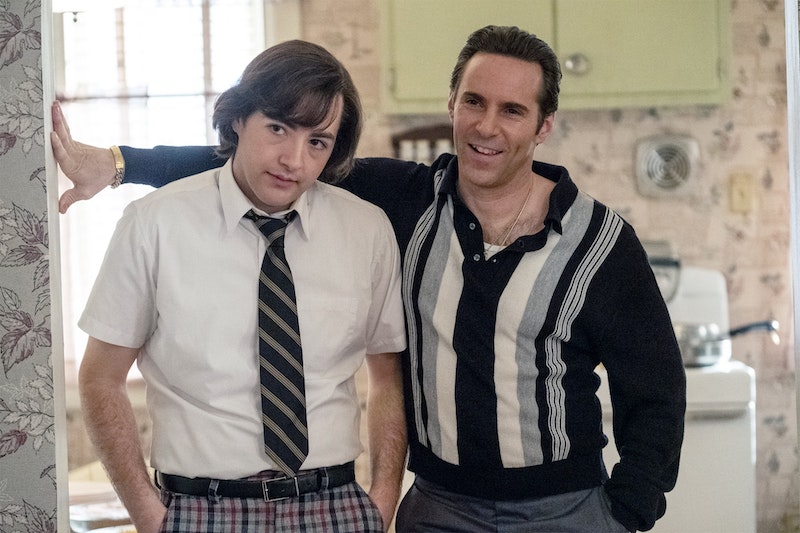 We make plans and God laughs. For instance, in the 1990s veteran TV writer David Chase made plans to break into movies with a film about a mobster who starts seeing a shrink. Hollywood said no to the film, but HBO said yes to the series, and the resulting TV show was one of the first (and still the best) examples of a new longform television storytelling whose inventiveness rivaled the best cinema had to offer. Chase became an auteur, just not in the medium he’d hoped, and he still longed for a shot at his big movie.

Once the show was over, he was able to make a small movie that was well-received but didn’t launch his career in film. He was forever associated with his TV show, and when HBO offered the chance to make a prequel film (directed by longtime collaborator Alan Taylor), he took the shot. After over 20 years, he was finally making his film about the New Jersey mob. HBO spends a ton of money on it, getting the period costumes and sets and cars just right. The film gets released in theaters by New Line Cinema, simultaneously with HBO’s new streaming service—fitting given that the film looks and feels much more like TV than the TV series that it’s based on.

The irony: Chase wanted to make a great movie and ended up making a TV series that felt more cinematic than most movies; when he finally got a chance to make the movie, he made a movie that felt more like TV than most TV shows. The Many Saints of Newark feels like a TV show not just in its presentation—the slick, dark color correction of the film bears few similarities with the show’s original color palette and even fewer distinctions from that of the average 2021 cable drama—but also in its story and characters. The film cherry picks cinematic framing devices (like the narrator from beyond the grave à la Sunset Boulevard, or the all too familiar rosy-lensed 1960s/drab 1970s two-act structure) to give it an air of movie magic, but these feel less like legitimate artistic choices when considered alongside the film’s many boneheaded TV writer contrivances.

As much as Chase and his collaborators may strive for this to be a standalone work—they even slap on the subtitle A Sopranos Story, suggesting a supplemental short story to the series’ epic novel—it’s more like a long, clunky, misshapen TV pilot.

The story revolves around Dickie Moltisanti (Alessandro Nivola), uncle of Tony Soprano and father of Christopher, during his era as king of the neighborhood during the 1960s and 70s. His illicit activities are mostly limited to petty stuff (running numbers, gambling, stealing speakers), but that doesn’t stop him and his associates from being violent scumbags. The first and most prominent plot thread involves Harold (Leslie Odom Jr.), a black man who collects for Dickie; rising racial tensions sour their relationship—culminating in the Newark riots, which are started at least in part by Dickie covering up a crime, like some Italian Forrest Gump—and by the 70s the two are bitter enemies. The second plot thread concerns Dickie’s relationship with his nephew (Michael Gandolfini); as referenced in the series, Tony idolizes Dickie, and Dickie’s attempt to be a good influence in Tony’s life forms the second major conflict. I say major conflict because the film’s loaded with a whole series’ worth of minor conflicts: Tony vs. Olivia (an excellent Vera Farmiga), but also Dickie vs. his dad (Ray Liotta), Dickie vs. his uncle (also Ray Liotta), Dickie vs. his dad’s wife (Gabriella Piazza), Dickie vs. Junior (Corey Stoll), and Olivia vs. any form of psychotherapeutic intervention. These conflicts don’t have time to simmer the way they did on the show, and these disparate threads never cohere, building to a conclusion even less satisfying than an abrupt cut to black.

Some of my peers have suggested that Chase was making something deliberately frustrating, a middle finger to the audience in a similar vein to the show’s final moment; that Chase recognizes that The Sopranos and its resultant wave of longform TV storytelling contributed to the closing of cinemas and the declining quality of popular film, and he therefore intentionally made a film filled with fan service and seemingly written-by-algorithm story choices of modern TV; that the maestro (alongside the director of Thor: The Dark World) is working in mysterious way lowly plebeians can’t understand.

I don’t buy it. This is the kind of writing that gets you laughed out of college creative writing workshops—why should we accept it from the creator of the greatest drama series ever? The best that can be said of this movie is that it takes some big swings for the fences, sometimes literal, like when the film reveals Dickie coaching a blind little league baseball team. Is this supposed to be a dream? A fantasy? Is he actually coaching blind kids? The answers to these questions feel irrelevant, since blind baseball is never mentioned again and is one of many arbitrary details in a shoddily assembled picture.

This points to the biggest difference between the film and the series: even the most frustrating choices on the show—Dr. Melfi’s rape, the dreams, Vito’s escape to a New Hampshire bed and breakfast, that final black screen—felt purposeful, while I get the sense that The Many Saints of Newark serves no real purpose, that it offers no extra insight into Tony, his family, or the American capitalist empire in decline. Instead we’re treated to all the amenities of shameless franchise resuscitation: winking callbacks, easter eggs, and a few tacked-on black characters with almost zero distinguishable personality traits, the film’s miserable attempt to say something about race. But at least you get to find out what Tony Soprano got on his Myers Briggs test, right?

HBOMax just announced a first-look deal with David Chase. This almost certainly means more Sopranos Stories, which will be just as pitiful as Many Saints.