Eternals is a serious dud from Marvel and Chloé Zhao. D 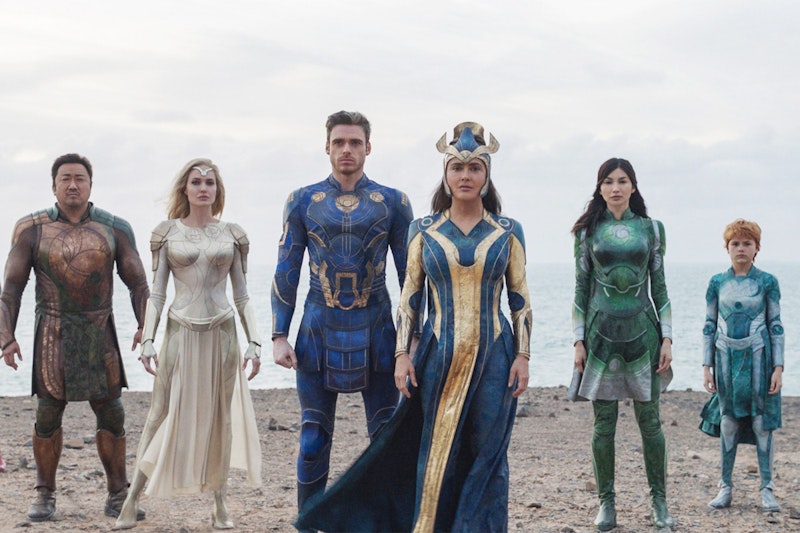 There are a lot of mistaken beliefs held by the most passionate of diehard superhero movie fans, and one of the most corrosive is the idea that they’re not only the most important movies at all, but that they’re real movies.

If a new director makes a smaller film that's creative and unique—even one that wins Oscars—the natural next step is for that person to step up and make a real movie, one where the characters have superpowers. It's the mindset that suggests that after Bong Joon-ho directed the brilliant, award-winning Parasite, it was time for him to step up and make a franchise movie, with Luke Skywalker or Batman.

With Eternals, the latest Marvel Cinematic Universe film, this theory gets a rare real-life test case. The film’s directed by Chloe Zhao, who’s made acclaimed indie films like The Songs My Brothers Taught Me, The Rider, and last year's Nomadland.

Eternals is a mess, and probably the worst MCU film since Thor: The Dark World. Zhao hasn’t lost it as a filmmaker—talented directors are allowed the occasional dud—but the structure of a superhero movie doesn't play to her strengths, or allow her to tell the sort of human stories she's good at. It also didn’t help that she's one of four co-writers, while she wrote her earlier films solo.

Many things go wrong. The mythology is ridiculous, and just when we're getting our bearings a twist about an hour in scrambles everything. Also, the stakes dwarf those of everything Marvel has done to date, yet the film has to include a line of dialogue to explain why these superheroes never helped out during any of the calamities in the previous 25 movies.

The CGI is unimpressive, making the action sequences ugly and hard to follow. Furthermore, there's so much exposition that it takes up a large chunk of the 157-minute running time. Dune had a lot of complex exposition too, but it also looked and sounded amazing.

The Eternals are a group of ancient alien superheroes who were sent to Earth centuries earlier to fight a group of evil monsters called the Deviants. The group is led by Ajak (Salma Hayek), who has a direct line to the group's godlike figure. Also included are Sersi (Gemma Chan) and Ikaris (Richard Madden), who are centuries-old lovers, while there's also Kingo (Kumail Nanjiani, whose significant bulking up has drawn the majority of the film's media attention in the last two or three years).

The youngest member is Sprite (Lia McHugh), who despite being hundreds of years old has never aged beyond age 12. Angelia Jolie also shows up, as Thena (not Athena), a warrior, while Barry Keoghan, the Irish actor with the unsettling, malevolent demeanor from The Killing of a Sacred Deer, plays a character called Druig.

There are a handful of compelling backstories, most related to Sprite's plight, as well as that of Kingo, who due to his immortality has spent multiple generations as a Bollywood star. But there are just too many characters vying for time. The main villains, the monsters known as the Deviants, are boring. And while there are highlights in the overstuffed cast, Richard Madden (Robb Stark from Game of Thrones) isn't up to the large role he's given as a Superman knockoff character.

Eternals is based on comic book characters created by Jack Kirby in the 1970s that are considered minor even to comic obsessives. These are the sort of characters who reach down to when it's the 26th film in the series (and one of four this year.) The Guardians of the Galaxy were pretty obscure too, at the time of their first movie, but at least their films were joyful.

There's a lot of welcome representation, with probably the most multicultural cast of the MCU to date, in addition to a deaf superhero (Lauren Ridloff.) There's a gay superhero (played by Brian Tyree Henry), and rather than continue the Disney tradition of merely mentioning in passing that he's gay, he gets a family and a husband who he kisses on the mouth.

The anti-woke types among the Disney fandom won’t like this, but some of their pro-woke counterparts are currently claiming the mixed early reviews of Eternals are evidence of racism.

Eternals also breaks another significant barrier: Two characters have sex on camera, which in the MCU is groundbreaking. It's too bad the sex scene is so nondescript, between two boring characters.